Shotguns and home defense go together like peanut butter and jelly. Home defense is all about close-range fighting, and the shotgun excels in a close quarter's role. Shotguns are versatile weapons, and they can be used for hunting, competition, and tactical use. When it comes to choosing a shotgun for home defense, it's easy to become overwhelmed by the number of choices, and that is where we come in. We've gathered 8 of the best defensive shotguns for your consumption. 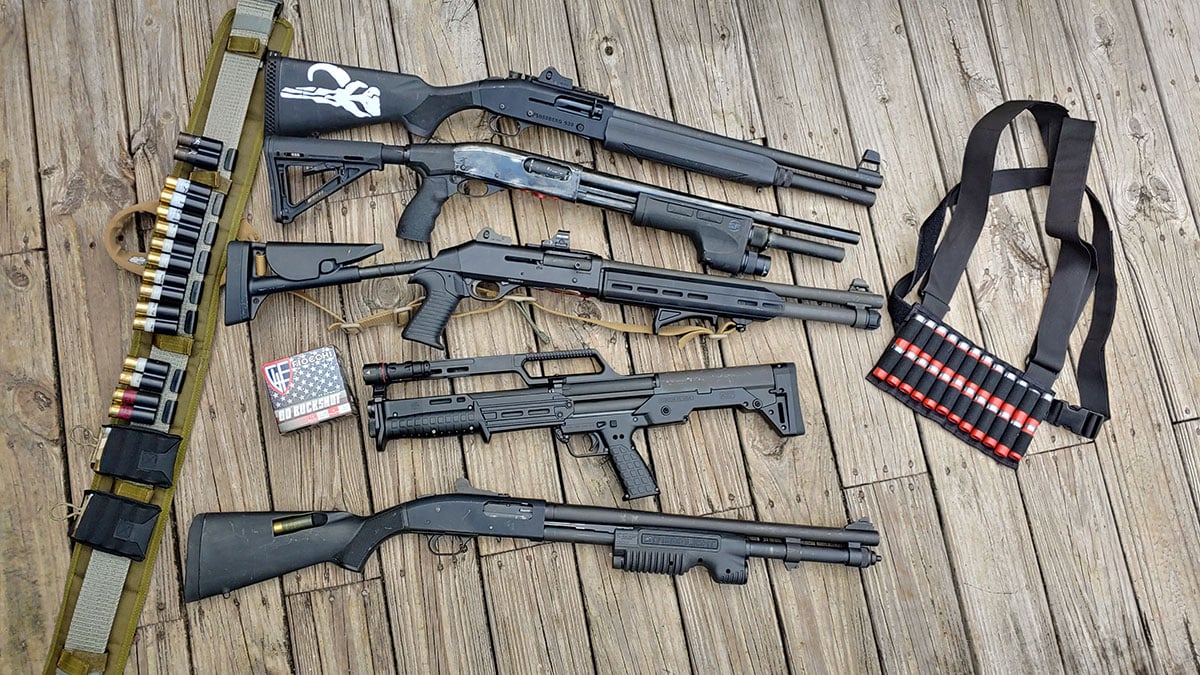 Check out our choice of the best shotguns for home defense: 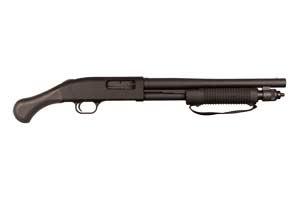 The Mossberg 590 is the tactical variant of Mossberg's popular model 500. The 590 is a pump-action 12 gauge shotgun that slightly changes the 500 design. The main difference is the magazine tube and barrel tube interface. The design allows for magazine extensions and the ability to configure your shotgun in a multitude of configurations.

The Mossberg 590 is a pump-action shotgun with an unbeatable reputation. The 590A1, a derivative of the 590, is the U.S. Military's pump shotgun of choice. The 590 was the only shotgun to pass the U.S. Army's Mil-Spec 3443E test. This test involved 3000 rounds of full power buckshot and a to hell and back design. The 590 series has served faithfully in wars and conflicts across the globe.

Mossberg 590A1 For Sale>>
In a domestic situation, the Mossberg 590 is a favorite of police forces for patrol cars and in less-lethal roles. For home defense, the Mossberg 590 is an awesome choice. It's incredibly reliable, and the pump-action design keeps things nice and simple. It's a robust and effective system that generations of shooters have relied on.

The 590 series features superior ergonomics, especially for left-handed shooters. The tang safety and slide lock placement are perfect for righties and lefties. The 590 is available with a multitude of sighting options. On top of that, all 590s come drilled and tapped for an optic's rail, and you'll be well served by a red dot enhanced shotgun.

The 590 is also an affordable design. Remarkably affordable for the level of reliability, durability, and how proven the design is. The 590 is the perfect budget shotgun option and one of the best pump actions out there. 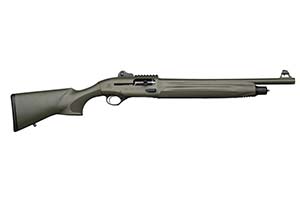 Sometimes defensive shotguns are built from sporting models, and sometimes they are built from the ground up. The Beretta 1301 Tactical is a bit of both. It's built with the technology and know-how Beretta has used for dozens of sporting guns, but at the same time, it's not a mere adaption of a sporting shotgun. The 1301 is built for tactical applications, and it shows.

This gas-operated semi-automatic shotgun and gas-operated shotguns are known for their reliability, soft recoiling nature, and being less than picky about ammo. The 1301 is no different in that regard. It's a quick cycling, easy handling shotgun suitable for both experienced and novice shooters. Where the Beretta 1301 shines is in its lightweight design.

At 6.4 pounds, the 1301 is one of the lightest weight gas-operated guns on the market. Lightweight defensive shotguns are good shotguns. A lightweight shotgun can fly up and on target and is easy to hold up on target. The lightweight design, combined with the semi-auto action, makes it possible for shooters to use the 1301 with a single hand if need be.

The 1301 is perfect for those looking for something light and simple with outstanding ergonomics. The controls are oversized for tactical use, the gun comes with ghost ring sights, and is optic's ready. It's hard to get better than that. 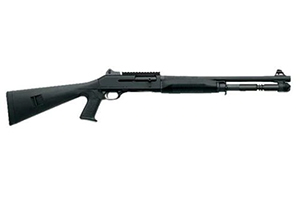 The ARGO system was created to ensure reliable function regardless of the conditions the shotgun encapsulates. The M4 can run filthy dirty, lube-free, and in the worst environments imaginable. The Benelli M4 runs and runs and runs without complaint or malfunction. The gas-operated system is designed to use with almost any load. This includes most low recoil loads and even cheap birdshot loads.

The Benelli M4 loads, fires, and spits lead at a very rapid rate. With proper training, you can fire five rounds in less than two seconds. The semi-auto gas-operated action also disperses recoil much better than a pump-action or inertia driven semi-auto shotgun. The M4 features enhanced ergonomics designed specifically for combat-oriented shooting.

This includes a larger safety, an easy to grip charging handle, a textured forend that's easy to grip and hang onto. Benelli is polite enough to tack on a set of high visibility ghost ring sights for precision and speed. Beyond that, the gun is stock with an optic's rail for attaching a red dot of your choice.

The Benelli M4 is the shotgun of choice when the budget isn't a concern, and you want the very best semi-auto shotgun money can buy. The Benelli M4 is far from cheap, but it's worth every penny. Benelli has crafted one helluva shotgun out of the M4 is a purpose-built tactical shotgun that's perfect for home defense. 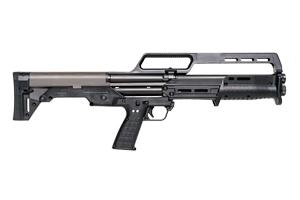 The KelTec KS7 follows the renowned tradition of KelTec shotguns in being short and light. The overly short design is because this is a bullpup shotgun. The KelTec KS7 is a pump-action 12 gauge shotgun that holds seven rounds of 2.75-inch shells. The KS7 looks and feels like it stepped out of the future. Defensive shotguns are best when they are short, and light and the KS7 is as short and light as it gets.

The pump-action design is hard to bear when it comes to reliability. The KS7 allows you to use any load you want with little difficulty. This includes the lightest of reduced recoil loads and even those neat little mini shells.

A bullpup shotgun places the action to the rear, behind the trigger group, which greatly reduces the gun's length. The KS7 is complete with an 18.5-inch barrel but is only 26.1 inches long. That's shorter than most short-barreled shotguns. The KS7 weighs only 5.9 pounds, and that's quite light as well. 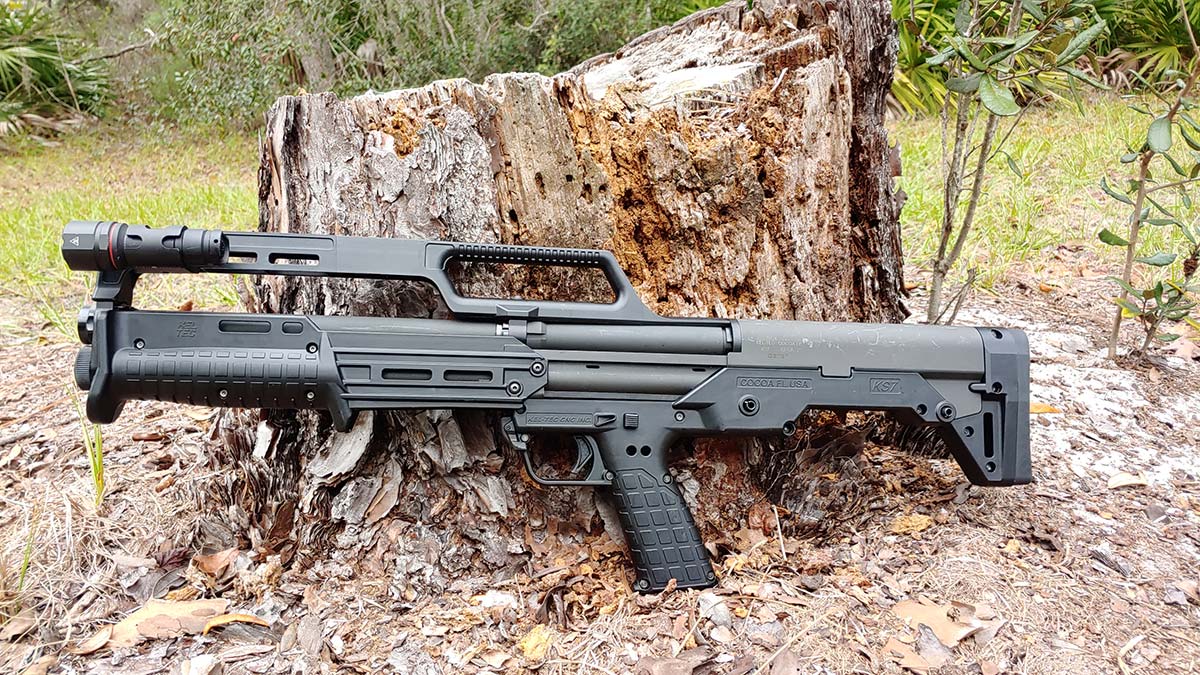 The KS7 is perfect for smaller shooters and shooters living in tight conditions. The KS7 is so light and short than anyone can handle it with ease. When paired with low recoil rounds, the KelTec KS7 is perfect for smaller shooters. The KS7, in general, is an excellent example of a tactical, close-quarters fighting shotgun. It doesn't get smaller or lighter than this. 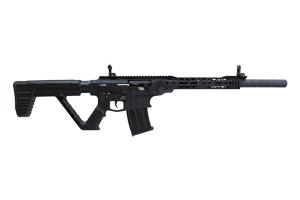 The VR 80's design gives you outstanding recoil reduction and makes the gun ultra controllable. The VR 80's box fed design makes those more familiar with rifles more comfortable with a shotgun. The VR 80 can be outfitted with AR 15 pistol grips and carbine stocks for enhanced ergonomics and fitment to make the transition from rifle to shotgun smoother.

The ergonomics feature an ambidextrous safety, an AR-style bolt lock, and an AR-style magazine release. The gun is even outfitted with AR-style flip-up sights. The design influences result in a shotgun that's easy to handle and incredibly ergonomic. The semi-auto design makes it easy to pump out round after round, and the ergonomics make reloads quick and easy.

The modular handguard and flat-top upper allow for the addition of accessories. This includes lights, optics, and more. Modularity is an important component to outfitting a home defense shotgun. The VR 80 series is different than most shotguns, but different doesn't mean bad. The VR 80 stands out as a fantastic shotgun that allows for quick reload, fast follow up shotguns, and custom fitting. As a home defense weapon, it's an outstanding choice. 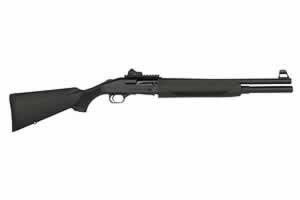 The Mossberg 930 is Mossberg's entry into the semi-auto shotgun realm. The 930 is a big line of shotguns that includes sporting and tactical models. For home defense, the tactical variants, specifically the SPX model, are perfect. As 12 gauge shotguns, they offer an immense level of power. The semi-auto action ensures fast follow up shots and softer recoil.

The gas-operated design ensures reliability with a wide variety of different powered loads. It can eat and digest birdshot for training, reduced recoil buckshot for tactical use, and full-powered loads for everything else. The Mossberg 930 and its gas operation also allows you to hang on every accessory you could ever want without the weight of the gun interfering with reliability.

The 930 design incorporates a lot of ergonomic lessons from the Mossberg 500 series of shotguns. This includes the awesome tang safety and an overly large bolt release that makes reloads quick and intuitive. The 930 comes in various configurations, which include a pistol grip and stock or a traditional stock. Options are always good, and the 930 offers plenty of them. 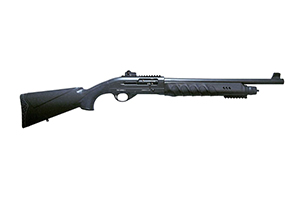 The pack includes a 24 and 18.5-inch barrel, a fixed traditional stock, or six-position side folding tactical stock, a +2 and +6 magazine extension, and high visibility sights with a stock optics rail. Right out of the box, a user can customize this shotgun to be whatever they wish. It's an impressive and well thought out design that allows the end-user to outfit their shotgun for their specific needs. 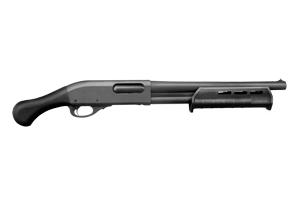 When someone says Remington, most people will automatically envision the Remington 870. Remington makes a whole a full catalog of firearms, but the 870 is their flagship firearm. The Remington 870 is a pump-action shotgun that's been in service with military, police, civilian shooters, and home defenders for decades now. The Remington 870 comes in a wide variety of calibers, including 12 gauge, 20 gauge, and 410.

The 870 comes ready to outfit to near any use, and on the home defense front, the platform's popularity allows it to be customized for the home defense role. The 870 saw some service in the United States military but became a much more popular option for American police forces. The Remington 870 has proven to be a very capable shotgun in defensive and tactical roles.

The 870 series are built like tanks with all-steel receivers and tight actions. Shotgun nerds love the 870's pump-action design. It's incredibly tight and smooth. It feels as if the pump is riding on smooth ball bearings. This smooth design makes the pump fast and easy to accentuate for rapid follow up shots. A smooth, grit-free action also helps prevent short strokes with the pump-action design.

The Remington 870's tank-like design and reliable action ensure the weapon feeds, ejects, and keeps rocking and rolling throughout any circumstance. The 870 series shotguns are fast on target and allow a home defender to quickly put lots of lead on target efficiently. The 870 tactical shotguns come out of the box ready for defensive use, making it the perfect choice for a new shotgun owner.

Shotguns are outstanding weapons for home defense. Choosing a shotgun is only step one. After that, you have to choose the right ammo, the right accessories, and get quality training in using your shotgun. Being armed doesn't just mean owning a gun; it means knowing how and being ready to use it.