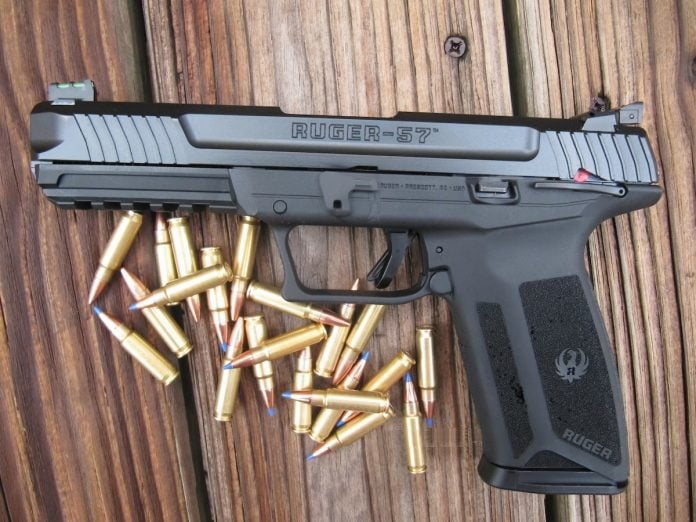 Stock Up On 5.7x28mm Ammo For Your New Ruger 57
Posted by JasonD
Updated 1 week ago
More deals from Wikiarms.com
21059 views
Buy at Wikiarms.com

The FN 5.7×28mm (designated as the 5.7 × 28 by the C.I.P.) is a small-caliber, high-velocity, smokeless powder, rebated rim, bottlenecked centerfire cartridge designed for handgun and personal defense weapon (PDW) uses and manufactured by FN Herstal.[8] It is similar in length to the .22 WMR (Winchester Magnum Rimfire)(5.7×27mm) and to some degree similar also to .22 Hornet or .22 K-Hornet. Unlike many new cartridges, it has no parent case; the complete package was developed from scratch by FN.

The 5.7×28mm was developed in conjunction with the FN P90 PDW and FN Five-seven pistol, in response to NATO requests for a replacement for the 9×19mm Parabellum cartridge. In 2002 and 2003, NATO conducted a series of tests with the intention of standardizing a PDW cartridge as a replacement for the 9×19mm Parabellum cartridge. The tests compared the relative merits of the 5.7×28mm cartridge and the 4.6×30mm cartridge, which was created by Heckler & Koch as a competitor to the 5.7×28mm. The NATO group subsequently recommended the 5.7×28mm cartridge, citing superior performance in testing, but the German delegation objected and the standardization process was indefinitely halted.

By 2006, FN's 5.7×28mm firearms — the P90 PDW and Five-Seven pistol — were in service with military and police forces in over 40 nations throughout the world. In the United States, 5.7×28mm firearms are currently used by numerous law enforcement agencies, including the U.S. Secret Service.

In addition to being used in the FN P90 and FN Five-seven firearms, the 5.7×28mm cartridge has subsequently been used in a number of other weapons, such as the AR-57 and FN PS90 carbines. Excel Arms has developed four firearms chambered in 5.7×28mm, and MasterPiece Arms offers three different firearms in 5.7×28mm. In December, 2019, Ruger announced its new Ruger-57 semi-automatic pistol chambered in this cartridge. The 5.7×28mm cartridge itself is produced in a number of varieties, two of which — the SS195LF and SS197SR — are currently offered by FN to civilian shooters.