This deal is out of stock. Check Fn Herstal 66796 inventory at other vendors or click here to get notified when it's back in stock. 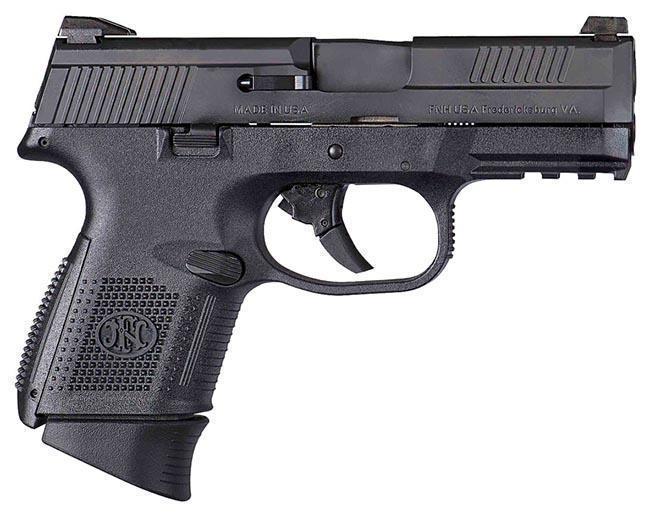 The FNS™ series represents FN's striker-fired semi-auto pistol platform. Inherent to the striker-fired design, the FNS series is double-action. Three sizes are available, each in two calibers: 9mm, and .40 S&W.

$75 Rebate with purchase of new Five-Seven Pistols
Purchase an eligible new model of the FN Five-seveN® beginning February 1, 2020 through April 30, 2020 and receive a $75.00 cash rebate.

Login or register to post comments
By B2theG, 3 months ago

Ordered it and had it at my FFL in 24hr. Great deal on a great gun. $342 after taxes and shipping

I received mine. Real nice! The case has a 2018 date but the included envelope with a casing from a QC test fire is dated 2015. Perhaps new stock returned to & inspected by FN? I agree, I think it's a smokin' deal.

up
0 votes
down
0 votes
View score
By AustinDean, 4 months ago

This is a smokin' deal on a great carry gun, if you like .40 at least.

up
2 votes
down
0 votes
View score
By rhosticks, 4 months ago

I picked up the 4" for the same price

up
0 votes
down
0 votes
View score
By Highlander, 4 months ago

What is the difference between this model and the 66722 model?

up
0 votes
down
0 votes
View score
By ceazer, 4 months ago

if you look at the listing for the 66722 on euros web site you see that it comes with 3 mags as well.
i would love to know the real difference between the models. mag count doesn't appear to be it though.

I believe this has to do with magazine capacity restrictions in certain states, and perhaps also California's list of firearms "approved" for sale in the state. Massachusetts limits handguns to 10 round magazines for citizens, but that limit doesn't apply to the local police department. So FN puts different URLs based on the magazine capacity, makes for easier record keeping and maybe fewer mistakes. As for CA's list of pistols a citizen can buy, I haven't researched it but I suspect that list also does not apply to law enforcement, so FN uses the different URL to distinguish what can or cannot be sold to consumers there. I don't believe there's an actual difference in the firearm. Where the firearm comes with a mix of different capacity magazines, that is just buyer preference. I have a Ruger sr9c that came with a twelve and a 17 round magazine. The idea was that the pistol was easier to carry concealed with the flush fit magazine, but you had the extended magazine as a reload if you needed it.

https://youtu.be/-oGBQgUr5ic
This is the issue on the regular fns. It doesn’t apply to the C because it is internally the same as the 509

Just bought this pistol from Eurooptic. The pistol was built in April 2018 and no trigger issues when I fired it today. No FTF, FTE, no jams. Fired about 85 rounds. Overall, an awesome gun.

up
1 vote
down
0 votes
View score
By Highlander, 4 months ago

Did you ask them the manufacturing date before you bought it?

No, I didn't. But the manufacture date is stuck on the side of the pistol case if you were to ask for it.

A compact 40 caliber pistol with night sights for 299 was a no brainer for me. my department is going from 40 cal to 9mm so I have extra 40 cal rounds and I needed a .40 cal. pistol. I was willing to send the weapon in for the trigger repair if it was built before 2017, but was pleasantly surprised to see that the pistol was built in 2018 hope this info helps.

up
2 votes
down
0 votes
View score
By Highlander, 4 months ago

Seems like a great price. If I knew it wasn’t on the list I’d grab one. And I’m wondering why no one else has them for sale?

up
0 votes
down
0 votes
View score
By yellowlt4, 8 months ago

The recall is really over blown, It's a simple striker replacement for guns made before Feb 2017. Its a simple easy fix. These are great shooters.

up
4 votes
down
0 votes
View score
By Highlander, 9 months ago

up
0 votes
down
5 votes
View score
By Kato, 9 months ago

Really? What the recall about?

up
0 votes
down
0 votes
View score
By maersk, 12 months ago

Firing out of battery, trigger pins walking out allowing the triggers to drop out of the gun, cracked sliderails causing slides to fly off.........gotta love FN quality........they had the brains to discontinue the pile of shit that is the FNS......only time will tell if the 509 is any better...

https://youtu.be/-oGBQgUr5ic this is the very specific issue of the fns. The C is internally the same as the 509. The “issue” isn’t duplicatable with a mallet dropping it etc. watch watch the videowatch the video

You are so full of shit. The fnsC is internally the same as the fn509. Go be a shill somewhere else.

up
0 votes
down
0 votes
View score
By Amish, 11 months ago

I looked into the Baltimore story you referenced. It looks like they had a problem with the striker. FN issued a recall on certain models to replace the striker with a new one that won't randomly fire. It's unnerving for sure but I don't see much difference between this and the sig pistol going off when dropped. As for the slide, frame, and other problems you mentioned: I can't find and reference of those.

I ordered this gun from these guys and they are legit on receiving what you paid for, the only complaint I have is their customer service sucks. Sent 2 emails and never received a reply, called twice and no answer...this is a nice little edc gun for the money

up
0 votes
down
0 votes
View score
By ceazer, 19 months ago

bought from this vender on a sunday night.
monday morning i got conformation emails
monday night i got a tracking number..
so far they seem legit. in case anyone was wondering :)

up
1 vote
down
0 votes
View score
By viral, 20 months ago

Bought this from Scopelist a little over a month ago (paid $20 more but there was also a rebate for a free light) and it's been great! I am planning to pick up conversion barrels for 9mm and .357 SIG to keep my options open but it's definitely manageable in .40 S&W. You get the flush-fit 10-round, the 10-round with the pinky extension (my preferred carry) and a 14-round full size mag with sleeve that gives you a full-sized grip. It's been rock-solid and I highly recommend it. If you already have the standard or long-slide FNS-40 it's a great complement.

Couldn’t agree more! Have 2 of the 4 inch and the compact! Best deal in the handgun market in my opinion! Europtic has been fantastic as well! Lovetthese