The Top 5 AKs of the Gathering

The Gathering is on! On the open range are dozens of pistols, pistols, rifles, machine guns, and even a flame thrower! Personally, the flamethrower was most attractive to me, but it seems like AKs have become a quick favorite. AKs were everywhere in various sizes, shapes, and calibers. I got my hands on each and everyone I could, and here are my five favorite AKs of the Gathering. 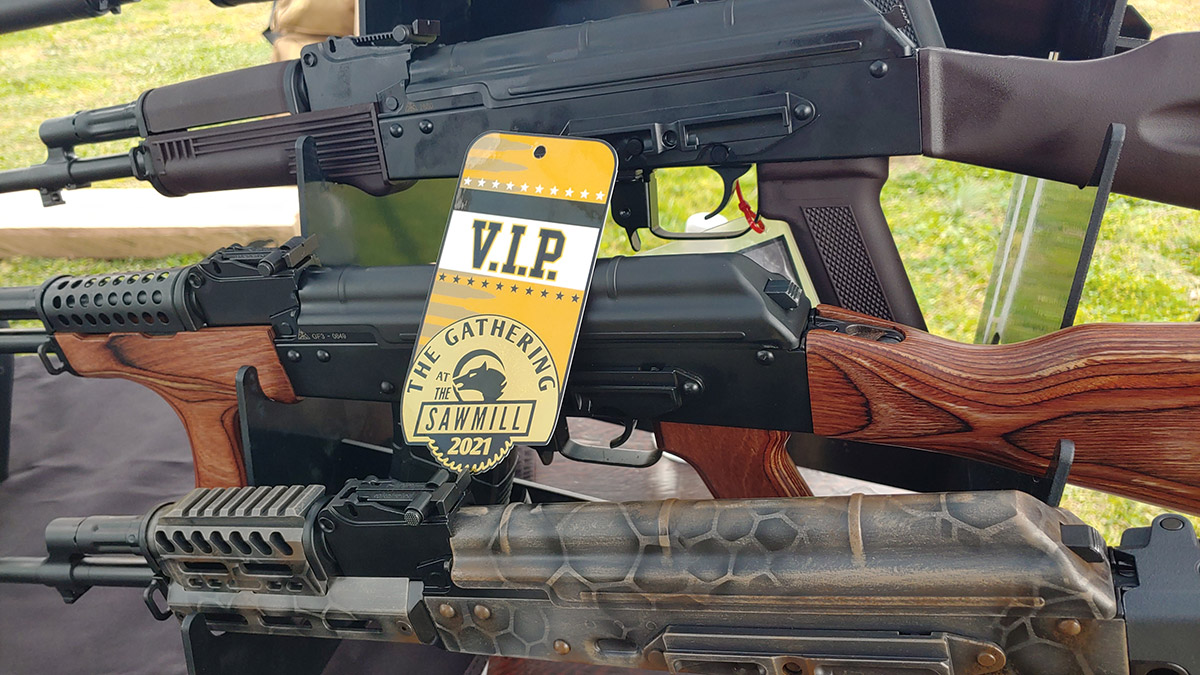 The Top 5 AKs of the Gathering: 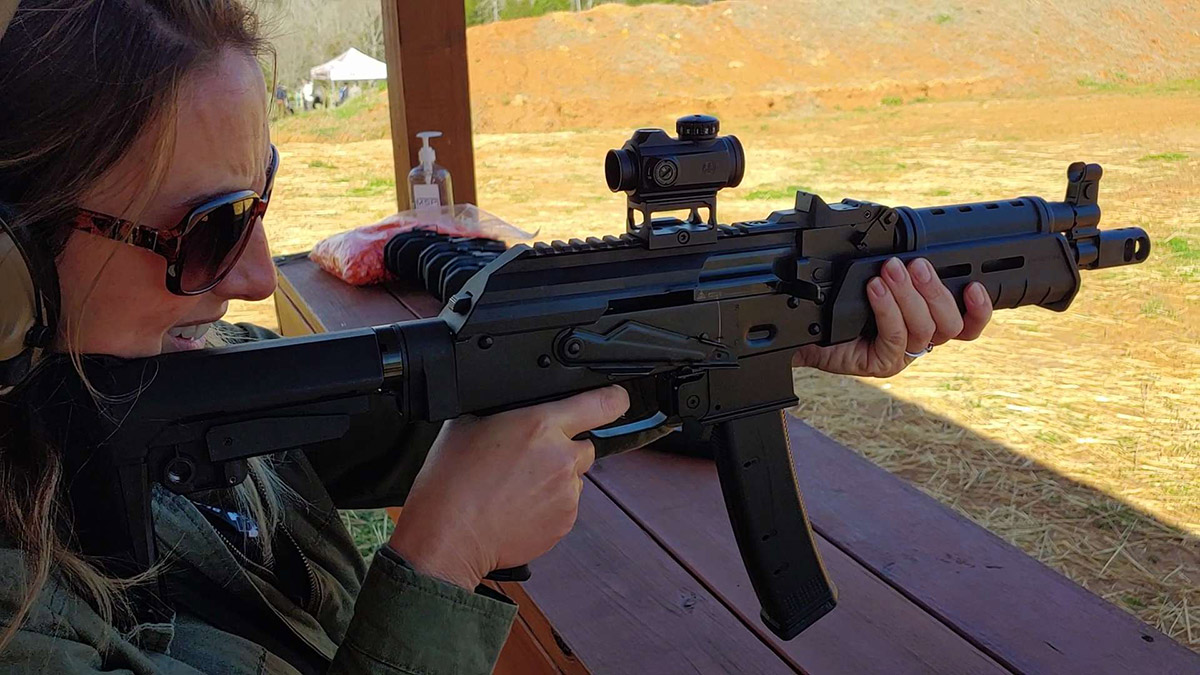 The world has been clamoring for a 9mm AK for quite some time. While they are rather popular with Russian security and police forces, the American market was left untouched. PSA couldn't let that sit and released the AK-V. The AK-V gives American shooters a Vityaz experience without the need to import the gun.

The AK-V we got our hands on was the pistol variant with a Magpul handguard and SBA3 brace. Wisely PSA used an existing magazine platform for the AK-V. Instead of expensive and hard-to-find proprietary magazines, the gun uses CZ Scorpion magazines. These are already proven, ultra-affordable, and they even add a nice aesthetic to the gun. AKs are known for the banana-like shape, and the Scorpion magazines provide that same curvature. 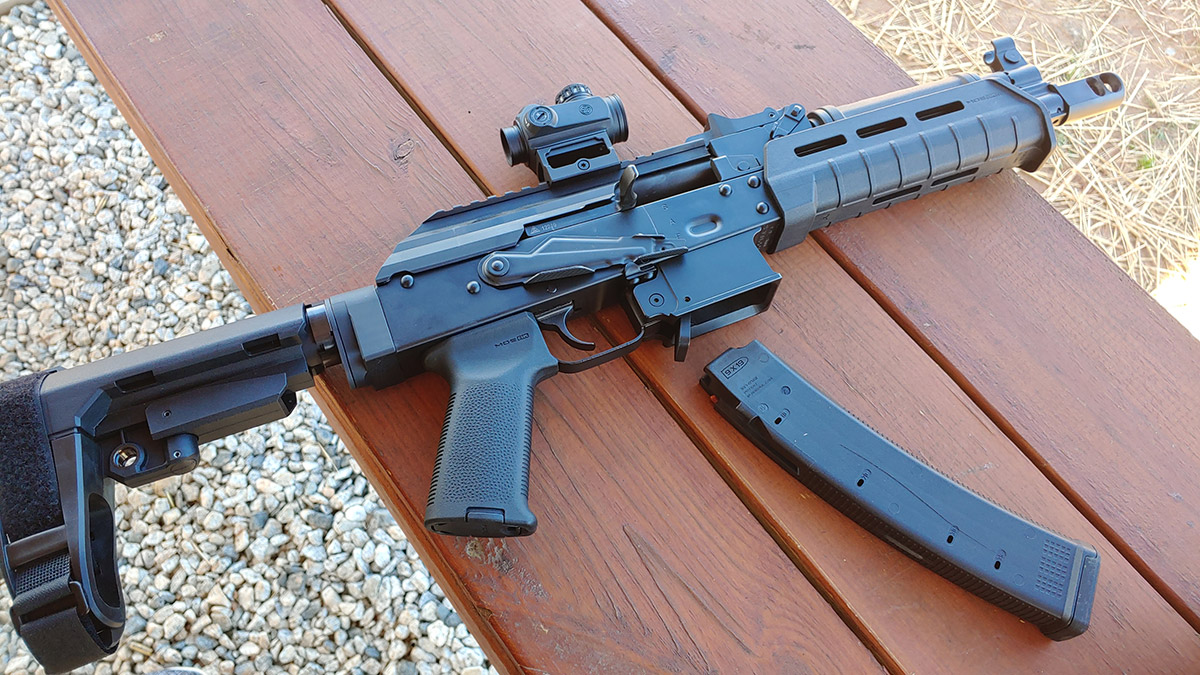 PSA manufacturers their own magazines, but standard CZ mags are interchangeable, including Magpul Scorpion magazines. Instead of a long-stroke gas piston system, the AK-V uses a blowback operation. It's simple, effective, and well suited for the 9mm round. The magazines also allow for last round bolt hold open operation, a rare feature for AK-based designs.

The 10.5 inch keeps things compact while providing a decent sight radius and adding a little extra velocity oomph to the 9mm round. My wee little girlfriend enjoyed the weapon a good bit and found it both lightweight and easy to control. Every AK-V with features a 1913 interface for attaching braces or stocks and a Picatinny optics rail for adding red dots and other such fun additions.

While our AK-V emphasized a modernized design, PSA is making plenty with a wide variety of furniture for a dose of both new and old school guns. 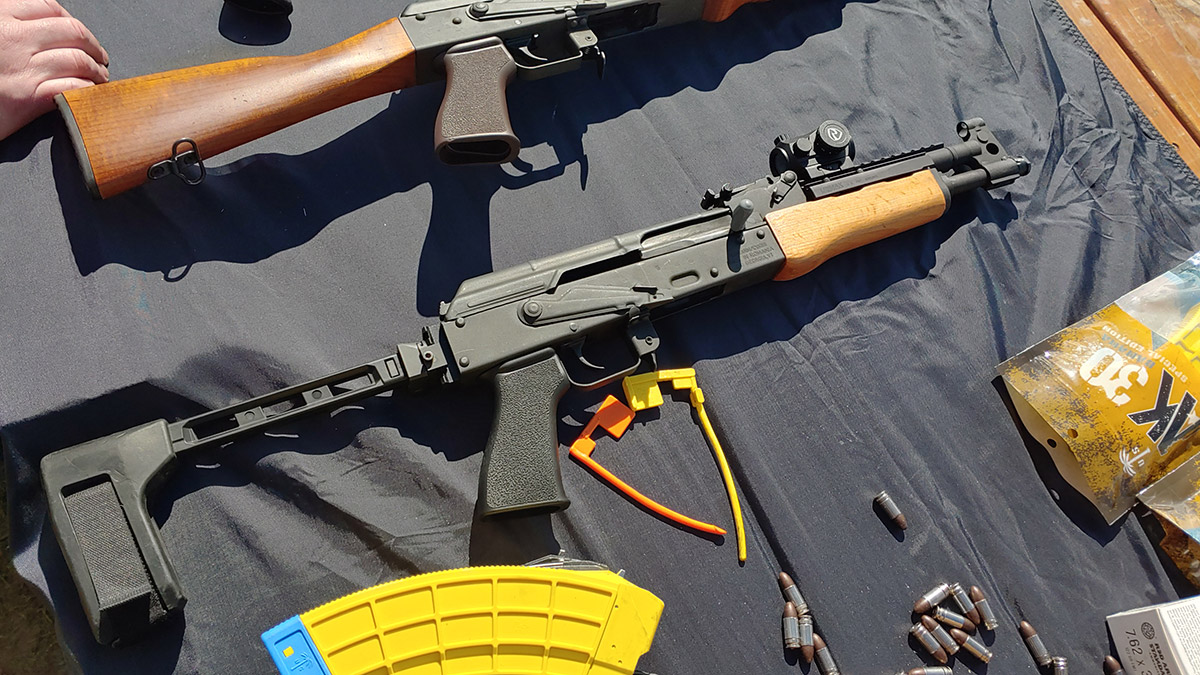 The word Draco is synonymous with AK pistols, and it's easy to see why. When Century Arms imported, the Draco people immediately embraced it. A super short AK platform proved to be as much fun as it sounded. The Draco comes in a few different sizes, but the standard model is what we are talking about today. It's like a Goldilocks situation. The Micro Draco is too small, and a regular AK is too big; the Draco is just right.

The Draco is all AK. It's a 7.62x39 gun that features the AK controls you either love or hate. The 12.25-inch barrel makes the platform nice and short for home defense purposes, and the gun weighs a mere 5.5 pounds. A short barrel with a rifle round does deliver a fireball's worth of performance, and ear-shattering is an apt way to describe it. It's small but mighty. 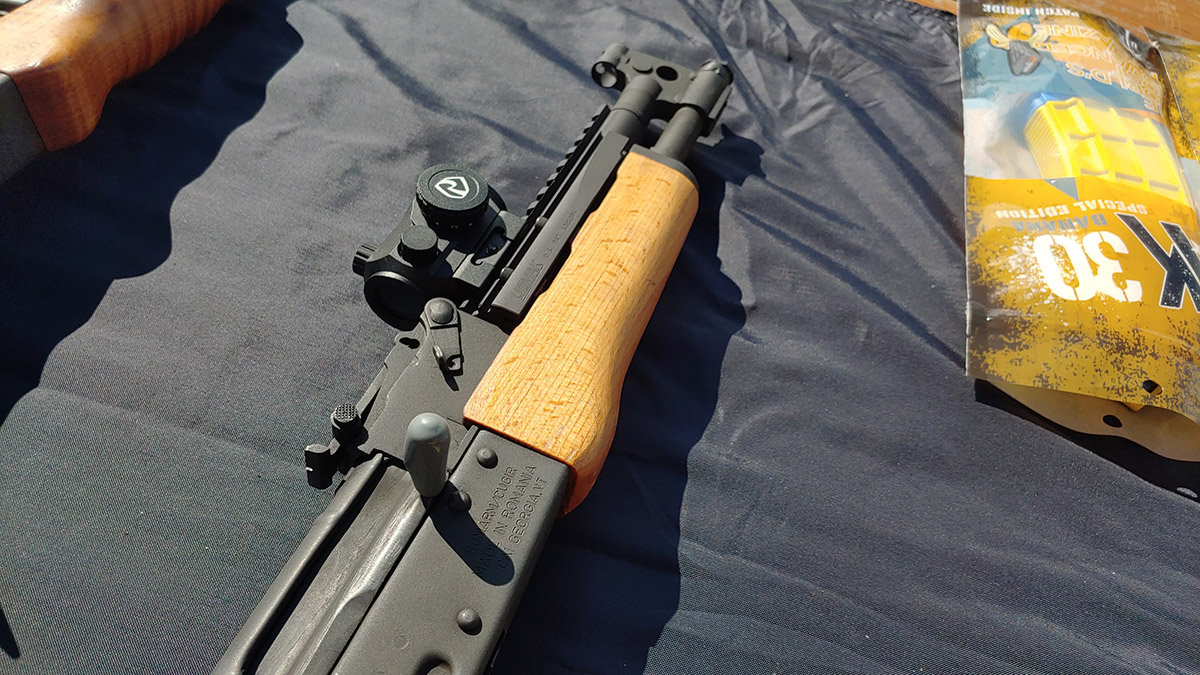 Newer models are also equipped with a 1913 interface to make adding a modern brace easy. Plus, modern braces from SB tactical often fold out of the way. Our sample uses the FS1913 brace, and it indeed folded when it was not needed.

While small, the Draco has low recoil and is quite controllable. If you decide to add a muzzle device, you'll quickly see even more recoil and muzzle rise dissipate. Modern furniture can also help add fun things like optics, as you can see from my sample. Century Arms now owns US Palm, and you can expect to start seeing US Palm furniture and magazines on some Draco models. A little birdie let me know to look out for something in plum in the near future. 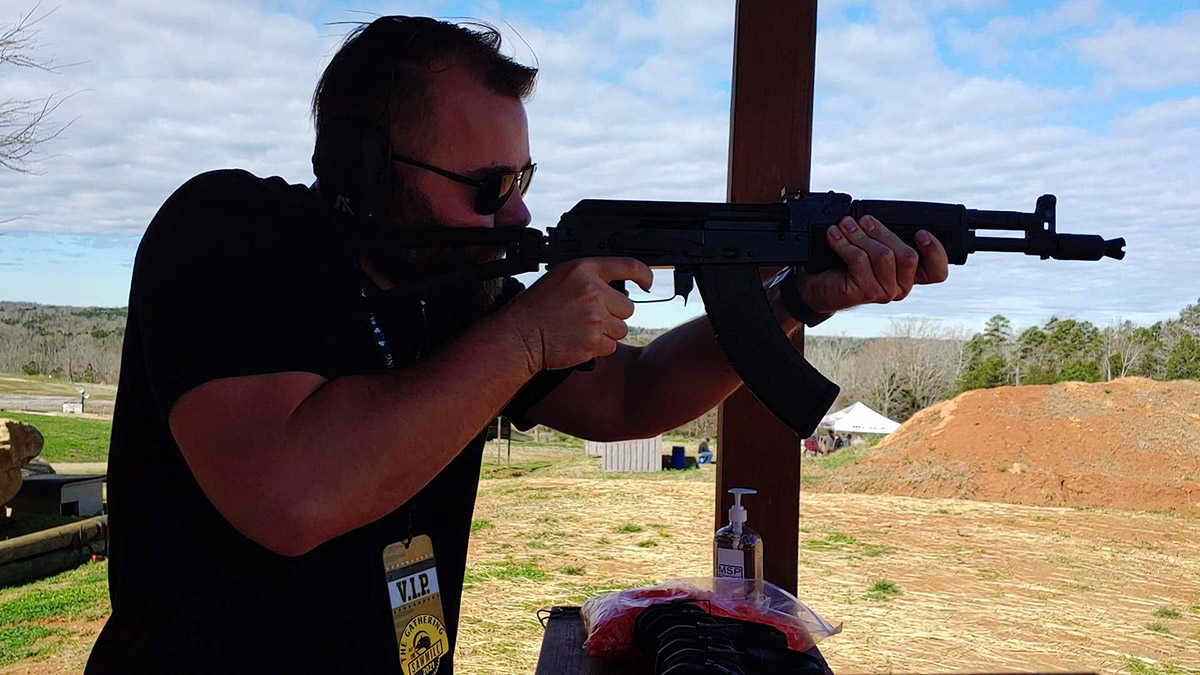 It's no secret that Russia has been working on updating its AK arsenal with various modernized options. The American marketplace has been devoid of these models...until now. PSA has expanded its AK offerings to include the famed AK 100 series. The AK 104 is the carbine variant of the AK in 7.62 x 39.

PSA's AK 104 replicates the design with their pistol variant, and rifle variants are available with a longer than standard barrel length. For this section, we will be talking all about the pistol variant. Like the AK 104, the PSA 104 has a 12.5-inch barrel tapped with a muzzle booster that's conical in design. This booster ensures both reliable operation and helps mitigate muzzle flash and concussion. 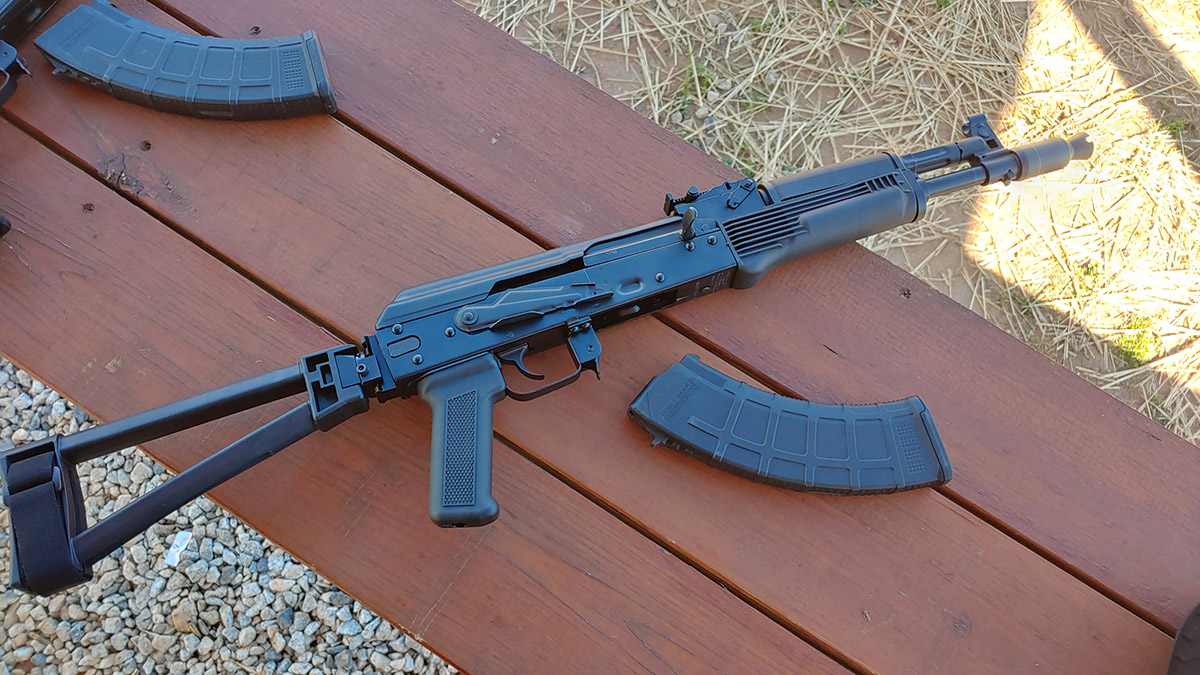 Unlike the Russian AK 104, some of the PSA 104s use a 1913 interface for adding a stock or brace. Our model was a PSA 104 with an SB Tactical side-folding triangle brace for that classic Kalashnikov look. Other pistol variants come ready with the hinge block for the classic solid AK 104 side folding stock.

At the range, the AK 104 quickly became a personal favorite. The muzzle booster made the short barrel design quite comfortable to shoot with. Recoil was dampened, and the gun easy to control without the telltale muzzle blast and fireball associated with 7.62x39mm guns with short barrels. It completed the look of the 104 and, for many, will be the only possible means to handle an AK 104.

A mix of classic controls and modern furniture turns up to deliver a fun carbine/pistol to fulfill that empty spot in your AK collection. 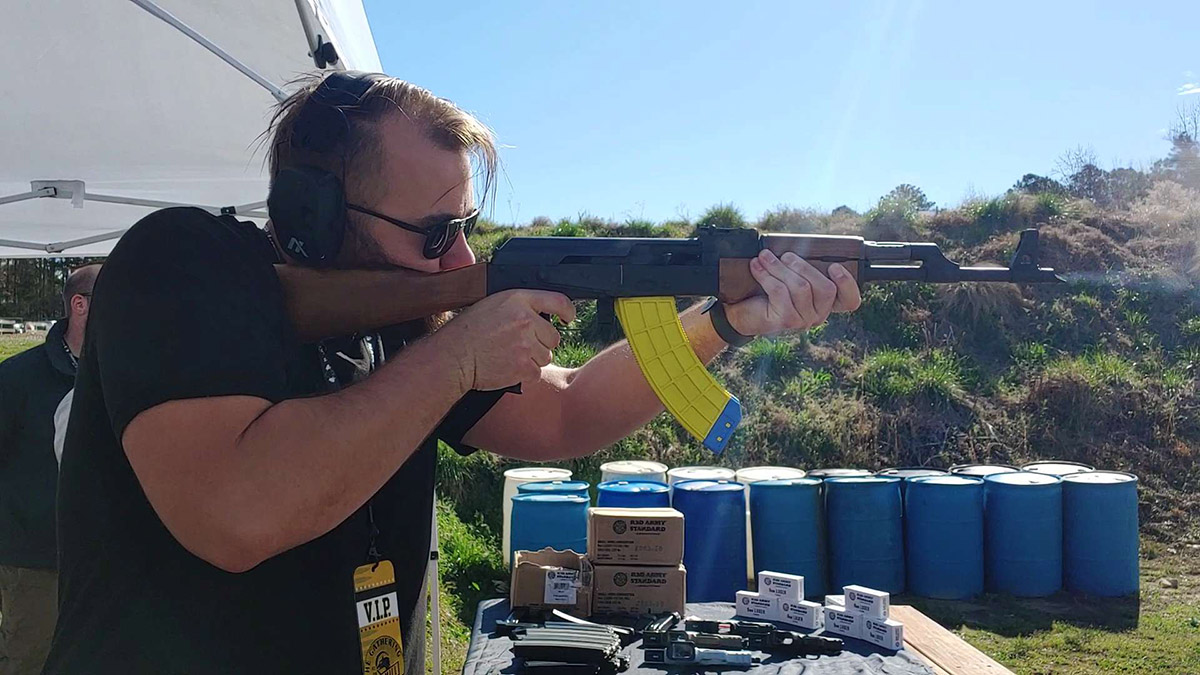 So far, I've shown you various AK-style weapons that are all derivatives of one weapon, the AK 47. None are actually AK 47s, or more accurately AKM, though. Nope, but if you are looking for a classic AK, then the Century Arms VSKA might be for you. What we got here is the classic AK complete with wood furniture, a stamped steel receiver, and plain ole AK sights.

No rails, nothing folds, and it is American-made. American Made AKs are often looked upon with suspicion, but the VSKA did pass the AK Operator's Union 5,000 round test. According to the Century rep who handed me the gun, this particular model had seen tens of thousands of rounds in various demos and was seeing tens of thousands of rounds once more. 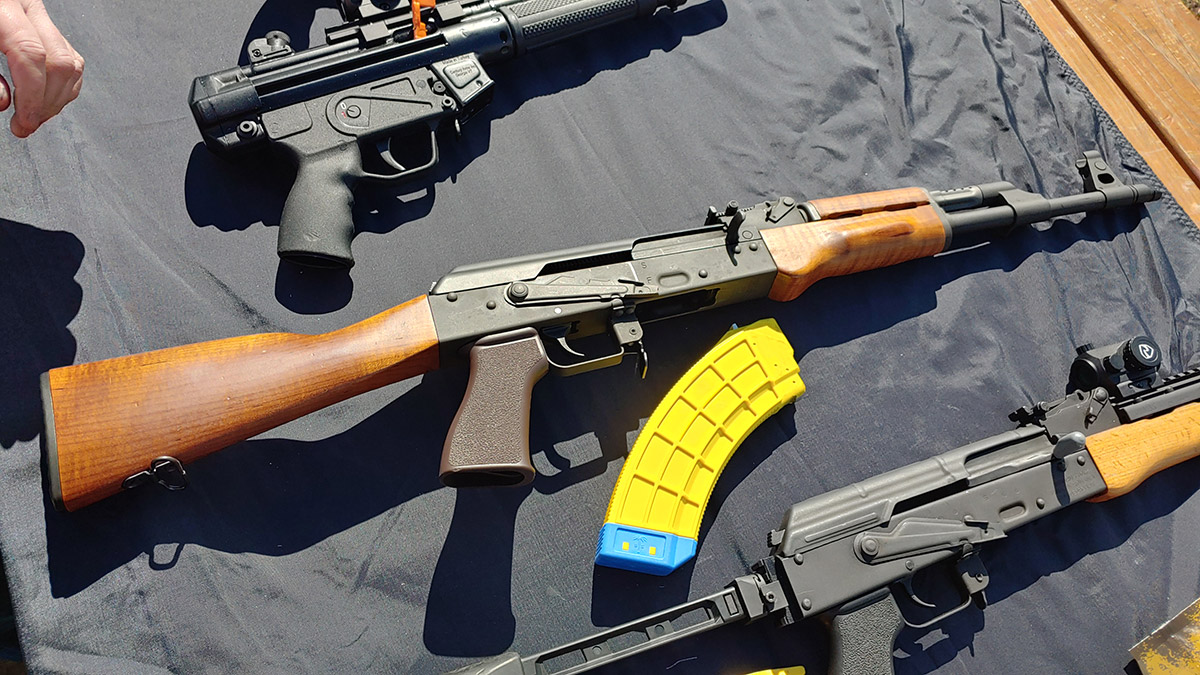 I was particularly impressed with the VSKA's trigger and how crisp the gun was. Admittedly after firing all these super short AKs, it was nice to get behind a real rifle. Full-sized AKs are smoother shooters compared to the shorter pistol and SBR variants.

The wood furniture provided a comfortable grip and cheek rest that allowed for accurate at the tiny targets near the end of the range. There is something so charming and comforting about a classic AK design, and the VSKA captures that feeling well. It's certainly a bit retro compared to the other guns on this list, but I can't lie about the fact it really drew me in at first shot. 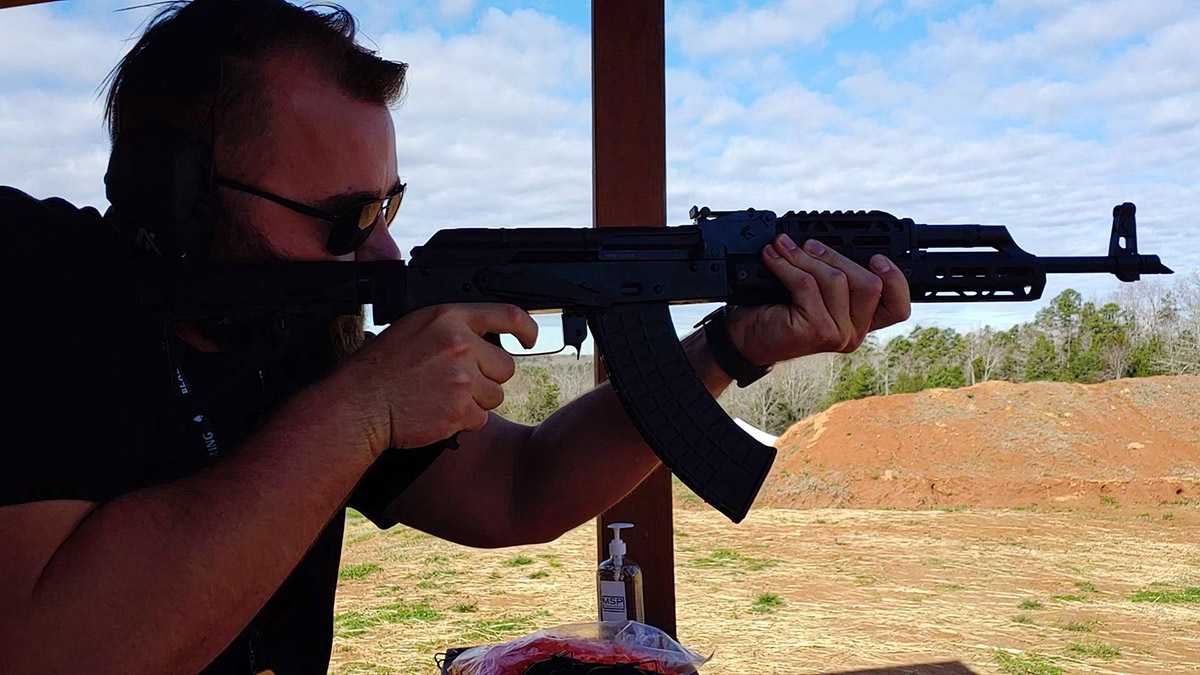 Wanna get a modern variant of the AK series? Then the PSAK-47 GF5 might be the AK for you. This is a classic 7.62x39 AK rifle with a 16-inch barrel that's also fitted with an extended aluminum M-LOK handguard, a rail gas cover, and Magpul M4 style collapsing stock and Magpul pistol grip.

This modernized variant gave us an optics rail that integrated a red dot for superior accuracy and faster shots on target. The M-LOK handguard is longer than your average AK handguard, and this allows you to be pickier when selecting where to put your various goods and accessories. Fixing the stock to your specific length of pull makes it easy to shoot for men, women, and shooters of all sizes. 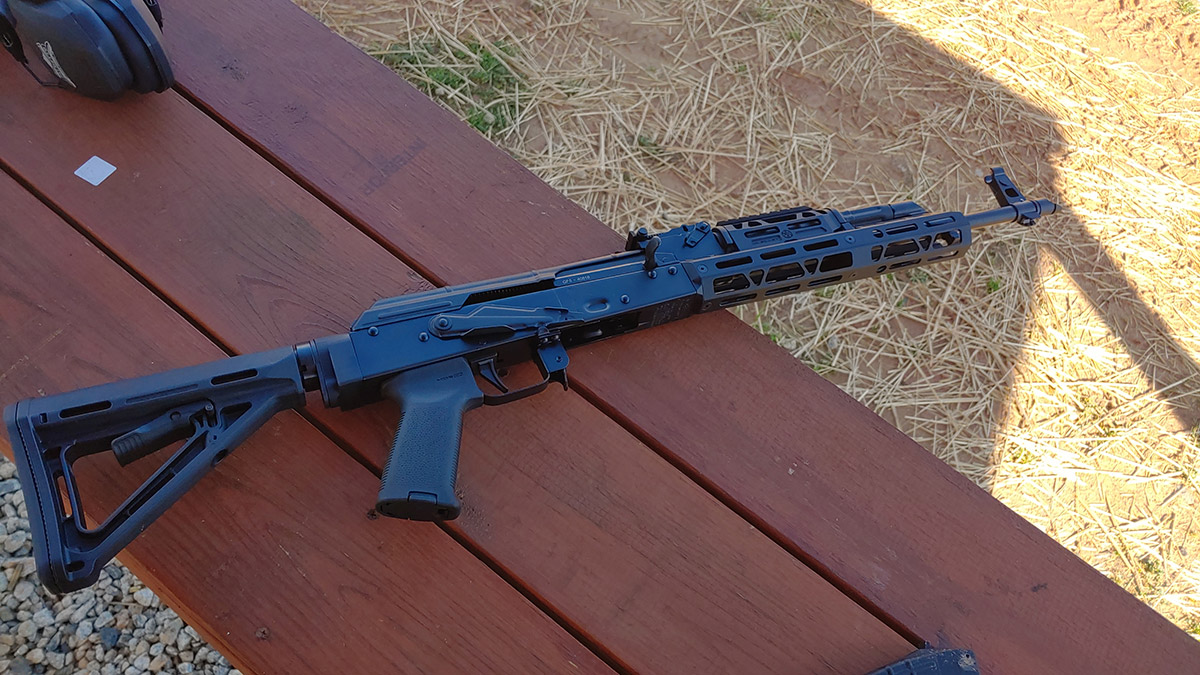 From a technical perspective, the gun is made to last. The PSAK-47 GF5 is fitted with a hammer forged trunnion, bolt, and carrier for maximum durability. The barrel is made by FN and uses the machine gun steel utilized by FN to make the M240 and M249 machine gun barrels. It's powerful and highly durable. ALG makes the trigger, and boy oh boy, is it sweet. Light, crisp, with a positive reset and an unbeatably smooth trigger pull.

The GF5 is the latest in the PASK-47 family, and it feels shoots and functions like a dream. Those looking for an AK rifle with a streak of modern modularity, then the PSAK-47 GF5 is for you.

The AK for You?

Which AK is for you? You have to have an AK of some kind or type to have a complete collection. Let me know what you folks think. It's hard for me to pick a favorite. I like the low recoiling design of the AK-V. I love the fact I can own an AK 104. The Draco is a Romanian classic that's an American favorite, and the VSKA is old-school cool! The PSAK-47 GF5 is super modern and made from the toughest materials out there. How could you ever pick 1? 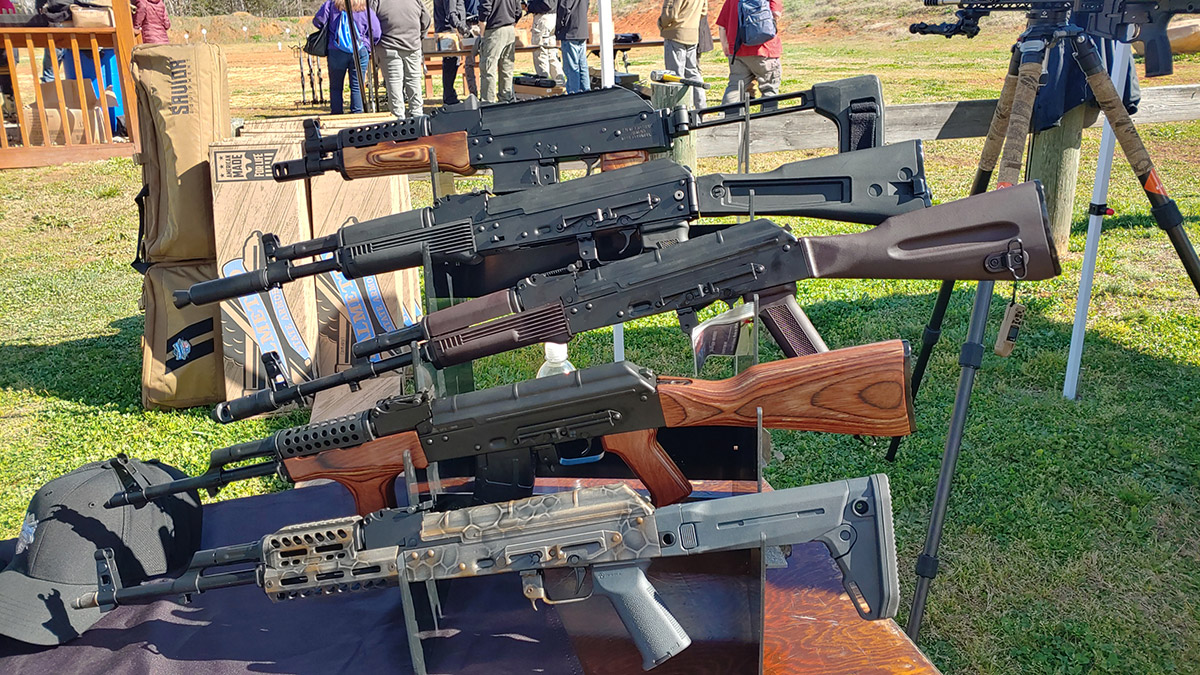