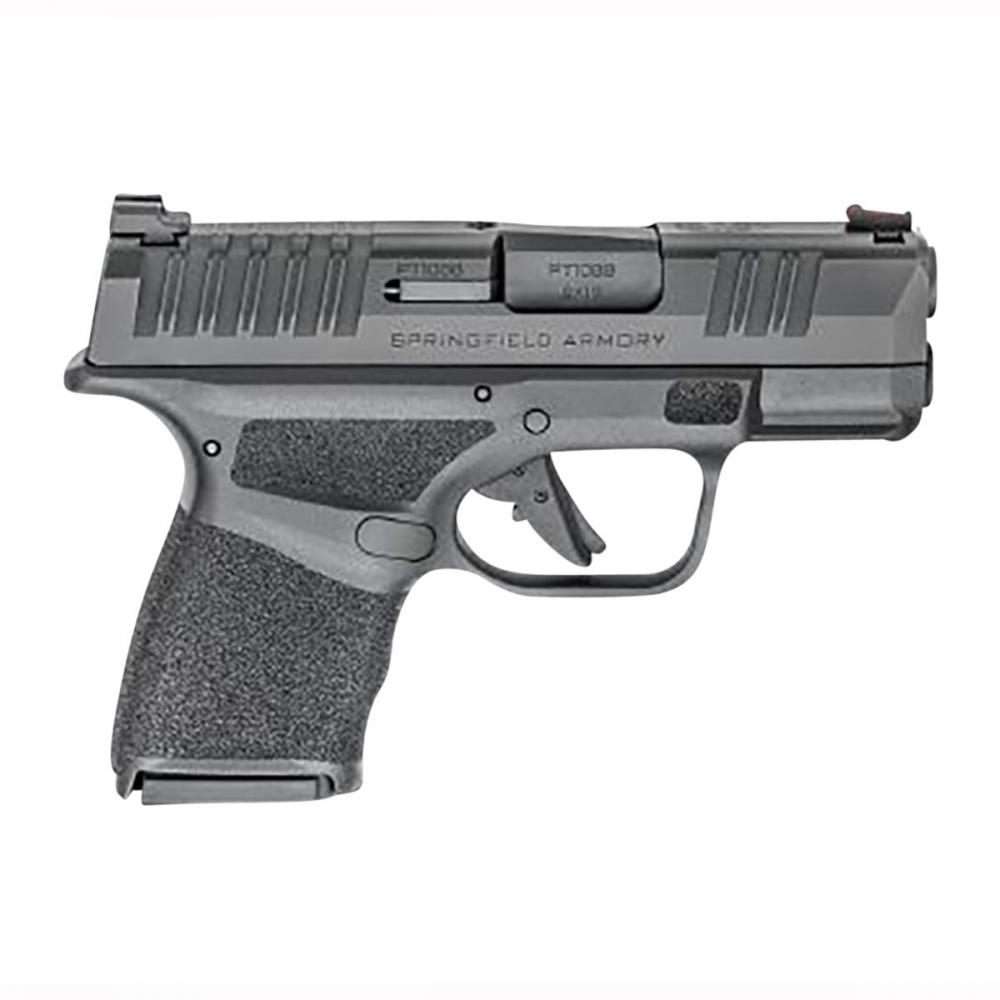 The 3" Micro-Compact Hellcat features a class leading 11+1 patented magazine, with a 13+1 extended magazine also included. The Front sight on this model will be fiber optic, it has a 3" barrel and chambered in 9mm.

Login or register to post comments
By kwc813, 2 days ago

First I even knew Gun Deals had a comment section, and THIS is what it's about? When is the last time there was EVER a threat to the 2nd Amendment? The last time you weren't able to walk into a gun store and buy a gun? It's NEVER happened in 244 years so this is ONLY political and divisive. Ignorance has no place in the field or on the range, nor do politics. No one's coming to take our guns. Don't be a political tool about this. Get your gun, respect what goes with it, learn to use it effectively, teach a kid to use it safely and THEN you've fulfilled your basic requirements. Then, if that's not enough for you personally then take any one sided opinion to the polls. It doesn't belong here. But that's just my opinion, and what I really wanted to know was when I could expect a Hellcat to get to my FFL. I'll look somewhere else now. There are a thousand other places to find one where politics aren't more important than open, cohesive and intelligent discourse. I'll be at the range.

There's been a threat to the 2nd amendment for awhile now. The RIGHT to bear arms but like Thornhulk said, there are states that requires you to get a permit(permission) to buy a firearm first. To obtain that firearm permit (just to buy),you have to pay a FEE and go through a background check even though there's a background check in place already. When was the last time you pay a fee to vote? Fee to express your 1st amendment rights? Then there's the high capacity magazine banned in some states. Criminals and government agency can/will used 30rd mags while law abiding citizen get fucked because they can only used 10rds. Mandatory gun registry in some states is bullshit as well. Why does the government need to know who has guns and how many?

up
0 votes
down
0 votes
View score
By Thornhulk, 1 day ago

Our current GOP "gun friendly" president has literally said "Take the guns first. Due process second.", and banned possession of bump stocks without compensation. Then there's ole Joe "Bingo, you're right if you have an assault weapon. The fact of the matter is they should be illegal. Period." Biden leading the Dem candidacy, who has tapped Beto "Hell, yes, we're going to take your AR-15, your AK-47" O'Rourke to "take care of the gun problem, you’re going to be the one who leads this effort”. Not to mention Diane "Mr. and Mrs. America, turn them all in." Feinstein is still leading the gun control efforts in the Senate. Luckily, I do live in a free state, where after a simple NICS check I can buy any firearm that doesn't fall under the NFA. Unfortunately for other Americans there are 14 states and counting that require you to ask them for permission first. If you don't think their are politicians that are a treat to the 2A, you're not paying attention.

up
0 votes
down
0 votes
View score
By lokichoki, 2 weeks ago

Dont forget Springfield Armory are traitors to our second amendment rights. Anyone who buys this screams that there not gun people, go buy a Sig P365/XL

up
0 votes
down
2 votes
View score
By gitrdone, 6 days ago

Yet they are making firearms and selling it to the public.....If it wasn’t for my p365, I would probably buy the hell cat. People need to stop forcing politics agendas onto others. If people want to buy SA then so be it.

up
2 votes
down
1 vote
View score
By Thornhulk, 6 days ago

A firearm company openly bending over to appease a mandate from an over zealous state legislature should be a point of concern for anyone that gives a fuck about your right to bear arms. Go ahead and be a sheeple to a company that has 0 fucks given about you...

Also, let’s not forget S&W made a deal with the government too and Glock was considering that deal as well. Link below.
https://www.washingtonpost.com/news/retropolis/wp/2018/02/27/a-gunmaker-...

Instead of getting mad at a firearm company, you should get mad at the state legislatures. At the end of the day, SA are still making GUNS for PEOPLE to buy. The hellcat is a prime example. It’s made for the purpose of CONCEAL CARRY for people, not cops, not military. Thanks to SA, guns companies starting to make optic ready slide standard on handguns, examples HK VP9 and Sig 365XL. By the way, I haven’t purchased or own any SA guns in my life(yet), so I have no reason to defend them. I try not to let politics influence my decision on my everyday life.

up
2 votes
down
0 votes
View score
By Thornhulk, 5 days ago

I'm plenty mad at the IL legislature, it's trash. I did the one thing I could considering chicago's grip, voted with my feet and moved to a better state. Apparently it's a trend.

S&W and Gluck got wise early that turning on your customer base is a bad move. SA didn't get the memo and only changed course when they got caught in a back alley deal. Regardless, they all did it for the money, but SA's flip flop was way shadier and literally hit much closer to home. It's gonna take more than a double stack sub and pistol optics to cleanse my pallet.

Youre a dumbass. It was a lobbyist they hired, learned what he did without consulting them, and fired him. Other manufacturers have done much worse. Get educated.

up
0 votes
down
0 votes
View score
By Thornhulk, 3 days ago

It doesn't negate them not having proper oversight on something they essentially created. They want to claim that they "weren't involved", but state IFMA acted "on their behalf" and dissolved once they were gone. Doesn't sound like an independent organization to me. If your "lobbyist" is going rogue, it's your responsibility to find out before someone else does. They can still get fucked.

up
0 votes
down
0 votes
View score
By DonBoy, 3 days ago

No one cares!!! If you have zero interest in SA, then why click the link? Sounds like someone doesn't have a life or anything better to do with their time.

up
0 votes
down
0 votes
View score
By Thornhulk, 3 days ago

Judging by the comments and votes, yes, people do care. You apparently care enough to comment, and I guess judging by your own qualifications, don't have a life either. Sins of the recent past shouldn't be immediately forgotten, especially with left trying to chip away at our rights any way they can.

Had SA originally been vocally against SB 1657 this would be a non issue. Instead they "hired" someone to go be slimy and cozy with the state, on a bill that would have had significant repercussions on local owned gun shops, but not them if they cooperated. I support those shops. It would be total negligence on SA's part not knowing about the details of a bill with such an impact. Big business fuckery at its finest.

The IFMA was formed/funded by SA and RRA a few years before the bill was even introduced. Before the bill, SA spent millions for gun rights and other things. It's a big fuck up on IFMA; and SA and RRA should have better oversight/control over what IFMA say/do. After the IFMA incident, SA spent a good bit of money to fight the bill which was vetoed. You act like they(SA&RRA) personally endorsed the bill. Like I stated before, I don't let politics, especially past/old incidents to influence my decisions on which firearm/tool I should buy that will save my life. If it's a good reliable product, then I'm buying it. I'm not here to change your mind or anyone else, I stated to the original comment to stop throwing this incident around and telling people what or what not to buy. Let them make that decision on their own. Say what you want, but I'm done with this topic.

up
0 votes
down
0 votes
View score
By Thornhulk, 1 day ago

It was a complete fuck up, and whether driven by incompetence, greed, or whatever combination, this level of debacle is pretty well a permanent ban for me. You're acting like a firearm company had no idea what was going on with a major gun control bill in the state they reside. Nor what their own organization was doing for them while trying to throw everyone else under the bus. There is simply not enough plausible deniability for me to buy(literally) their bullshit. I get it, the bill wouldn't have ever effected you or anyone you know, but I know good people who's shops would have closed had it passed. If companies want to keep politics out of it, they need to keep out of politics.

Im pulling the trigger on this new Hell cat. I love the fact that I have no idea when I will get it. The anticipation is so exciting. On top of that you get it from Brownells. I'm not even going to see if its in stock elsewhere ! Awesome deal !