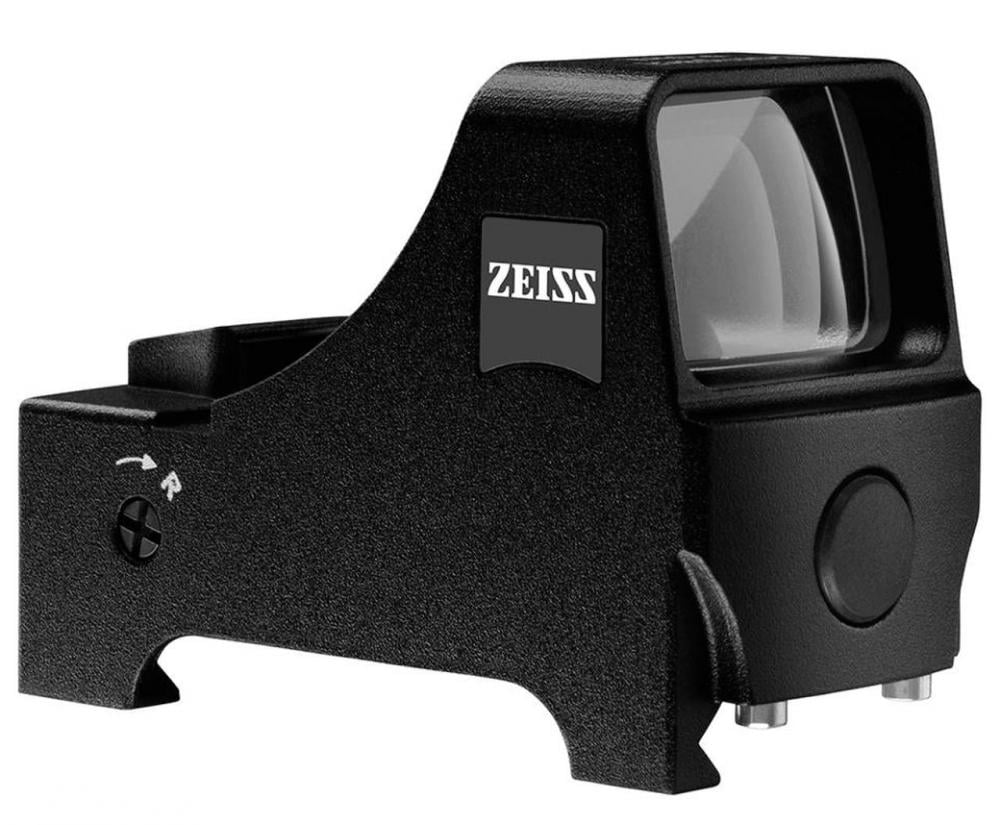 Zeiss'' Compact Point Red Dot Reflex Sight is a high-performance reflex sight featuring an integrated clamp compatible with Picatinny and image Weaver rails. The Zeiss Compact Point features a bright red dot for impressive accuracy and quick targeting. With a wide field of view, the Compact Point gives you an advantage in the field. The wide, ergonomically optimized eyepiece allows for natural viewing with both eyes open and with Zeiss red dot sights, optical quality is always top notch. It also has a Lotu Tec lens coating that provides a high contact angle so moisture balls up and rolls off on contact. It sheds water, dirt, grease and grime, plus can be wiped clean without smearing or damaging the optics.
MPN#: 521790
UPC#: 740035001725

Login or register to post comments
By LibtardTbagger69, 4 months ago

A lot of good information in these comments. Except for Martry and mlaszlo, thanks for the info. Learned a bunch

up
0 votes
down
0 votes
View score
By mlaszlo15, 9 months ago

What a bunch of little girls on here. What's wrong, you need some midol? meet somewhere and have it out instead of hiding behind your keyboards like pussy unicorns who need a safe space. Be a man, crybabies.

You're right, my opinion means nothing.
Your opinion also, means nothing.
I could give a flying shit about any of those little red dot sights, don't use em. don't promote them, point and laugh at people that do use them.
"hey let me cover up what I'm trying to hit with this red dot"....brill.

go on with your own bad self phan boi

up
0 votes
down
0 votes
View score
By Martyr_Machine, 14 months ago

Sorry, Zeiss. You don't get to show up late to the party and immediately start charging RMR money for your unproven dot.

up
0 votes
down
0 votes
View score
By crabbysam, 9 months ago

I hear you but Zeiss has been making the finest glass optics roughly 150 years before Trijicon came along. Zeiss has been around since 1846, and theres a Reason Zeiss binoculars and microscopes fetch thousands of dollars.

up
0 votes
down
0 votes
View score
By Thorax, 14 months ago

Really ?
Zeiss makes the very best scopes in the world.....your overrated RMR should hang it's head in submission when it gets near a Zeiss.
https://www.eurooptic.com/carl-zeiss-optronics-hensoldt-zf-35-26x56-rifl...

up
0 votes
down
2 votes
View score
By Martyr_Machine, 14 months ago

Zeiss is new to RDSs. Their RDS is unproven and offers nothing innovative or new. They just made one and decided people should pay a lot for it.

No. That isn't how it works.

The RMR is the standard for compact RDSs. If you don' know this you must be new to firearms.

up
2 votes
down
0 votes
View score
By Thorax, 14 months ago

Chances are high that I was a licensed gunsmith before you were born.

I understand what a red dot sight is, and am not even afraid to spell it out.....instead of using RDS which could mean retard development school for all I know.
Optics, clarity, reliability, repeatable settings, durability are what matter....not brand name.
I have yet to see any Trijicon product that isn't "just ok". I don't put just OK stuff on anything I build...I'm not in the game to be another ruger/remington/savage type company.....to me those are just ok.
Ever used a Kahles or IOR optic ?
If you can't see it, you can't hit it.

up
0 votes
down
7 votes
View score
By Martyr_Machine, 14 months ago

You know nothing about me, what I own, or what I have used. You clearly have an emotional attachment to this new to the market RDS.

The RMR is the standard for all the reasons you stated and it won't change just because you think your opinion means something.

You didn't know what RDS meant, yet you are pontificating as if you know what you are talking about. You are just a self-important old man.

This thing is so crappy that Zeiss doesn't even make it anymore. Same with the Z point. Not even on their website anymore. They probably never made them in the first place. I guarantee it was outsourced.

These idiots are trying to sell this thing for near MSRP when it was discontinued 5 freaking years ago because it is so shitty.

What is it with people in the Internet getting all hot and bothered about what other people think? Why is it that everyone needs to defend or attack every product that they do/don’t personally want? Is it self-justification to help you feel better about and rationalize your purchase decisions?

I just don’t understand what there is to be so worked up about...

up
0 votes
down
0 votes
View score
By Martyr_Machine, 10 months ago

I guess that guy felt personally attacked because of some discontinued, overpriced red dot.

up
0 votes
down
0 votes
View score
By DanTampa, 10 months ago

While I think Thorax overreacted in his response. Your statements are certainly and completely erroneous. Zeiss is indisputably a leader in quality optics across all fields from hunting to medical and have been for the last century. I have personally integrated their microscopes into some of my network installations in dental offices. When it comes to the application of optics, Zeiss is one of, if not the best and most diversified in the world. Zeiss has been providing innovating optics for military use since WWI, from binoculars, to periscope and tank optics, to being a pioneer in thermal imagining, and of course scopes and red dot sights.

Your original post stated they were late coming to the RDS party because you thought this was their first and newly released model. Then you realize you were wrong, as this is not a new but discontinued model. The truth is Zeiss arrived at the military RDS party about the same time as Trijicon, but was in wide spread use as much as 10 years sooner.

In 1997 the Germans introduced their new H&K 36 army service rifle. A Zeiss red dot sight and 3x magnifier were pretty much standard issue with that rifle. The H&K 36 rifle has been in service in some variant since 1997, and is still in use in something like 40 countries. When the Spanish military made it their standard military issue rifle it included a 1.5 x Zeiss red dot sight.

In comparison the Trijicon unmagnified red dot reflex sight started showing up on US Special Forces rifles around the same time and wasn’t in wide spread use until after 2009 when they released the smaller RMR to be mounted on the Trijicon ACOG.

So not only have they been producing red dot sights for quite some time, they are every bit as combat proven as Aimpoint, Trijicon, or Eotech. I don’t believe they have any current models in production for civilian use available. But rest assured, if they introduce any new models, they will be well worth whatever price the market will support.

Probably why a discontinued model still commands more than a bargain basement price.

As far as your “ I guarantee they were outsourced” remark, I know their Victory Z Point model was not outsourced so I doubt their Z Compact Point model is either. The idea they were discontinued because they were “shitty” red dots shows your lack of knowledge of the quality of Zeiss products. Basically your negative statements about Zeiss red dots are not within the realm of expressing an opinion, but rather diatribe from the uninformed.

up
3 votes
down
0 votes
View score
By Martyr_Machine, 9 months ago

Imagine that. They are so bad that no one was even aware they existed. No wonder they were discontinued.

The market did not support that price. Funny you mentioned the market. It just disproved your premise.

It doesn't matter where the Z point was or was not made. That implies nothing about this thing.

I own Zeiss products.

Your statements about my statements shows your lack of knowledge of basic logic and reason. Again, your bias is obvious.

I guess that covers everything.

All that typing and you didn't really say anything at all.

up
0 votes
down
0 votes
View score
By DanTampa, 9 months ago

We are not in a vacuum here and anyone with reasonable reading with comprehension skills can read my previous statements in the context of addressing the posts of yours I was responding to.

Btw, just because you were unaware they made an RDS, doesn’t mean no one else did. You were the one making the derogatory remark guaranteeing it was outsourced. Now you say it doesn’t matter where it was made. You didn’t even know they made an RDS before you seen this listing but some how you know it is a crappy RDS of poor quality.

I have no bias...I simply stated verifiable facts without attacking any other product. You are obviously an RMR fanboy with the need to attack this product with uninformed and incorrect assumptions. That indicates bias.

I call bullshit on your ownership of Zeiss products. Zeiss products are high end and expensive, so no one buys more than one unless they feel the quality warrants the price. Such a person would probably know about the Z Point, and even if they didn’t they would assume it was on par with their other Zeiss products and therefore expect it to be priced accordingly. That is not what you did is it? You ranted and raved about what an over priced crappy RDS it is. Yeah that just screams out you are an owner of Zeiss products.

I do have to admit you appear to be very knowledgeable and proficient with a shovel the way you keep digging yourself a deeper hole with each post you make on this topic.

up
2 votes
down
0 votes
View score
By voiceofreason, 9 months ago

This “Martyr Machine” fellow enjoys bashing perfectly good products bc it makes him warm and fuzzy on the inside. Probably a symptom of little man syndrome.

up
0 votes
down
0 votes
View score
By Martyr_Machine, 9 months ago

This “voiceofreason” fellow enjoys bashing (insert whatever) bc it makes him warm and fuzzy on the inside. Probably a symptom of little man syndrome.

up
0 votes
down
0 votes
View score
By voiceofreason, 9 months ago

Quit being such a troll and people might listen to your opinions.

up
0 votes
down
0 votes
View score
By Thorax, 9 months ago

He also believes a Ruger precision rifle is the equal, or better, of any long gun made.
I don't think he understands the concept of how plastic makes an item less desirable.

up
0 votes
down
0 votes
View score
By Martyr_Machine, 9 months ago

There is nothing plastic on the RMR besides some components of the stock....which is the same for every other rifle out there that isn't using wood. I never made any statement about the RPR being "the equal, or better, of any long gun made." You are just making up crap now because your feelings are hurt.

You are now, and continue to be,....an idiot with hurt feelings.

up
0 votes
down
0 votes
View score
By Thorax, 9 months ago

I didn't know a RMR had a stock ?
You said "which is the same for every other rifle out there that isn't using wood"
I can post at least 300 rifles with no wood and no plastic.....unlike the Ruger with it's plastic trigger components.
Here is what Ruger says "When cleaning is necessary, use a solvent that will not harm the polymer"

If you need any more lessons JUNIOR, come ask daddy.