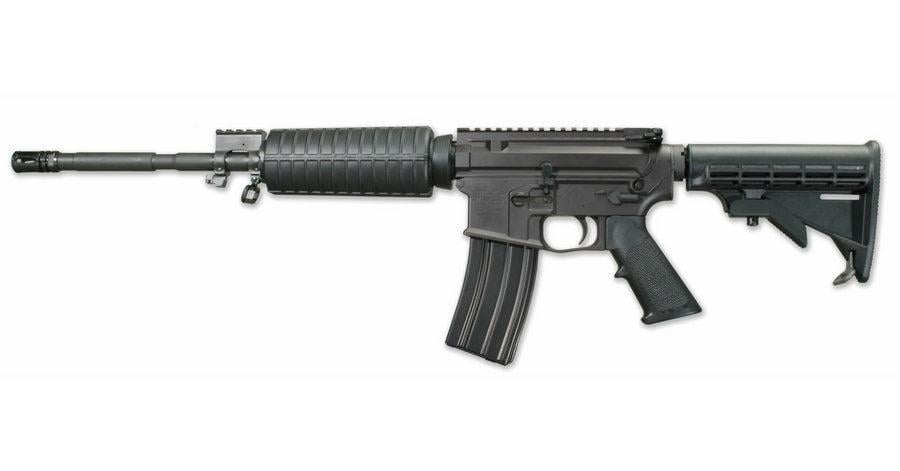 Manufacturer: Windham Weaponry of Windham Maine Item: Windham CF1 AR-15 Item: Ultra-Lightweight and Strong Carbon Fiber Caliber: 5.56/223 For sale here is the Windham Weaponry R16M4FTT-CF1 .223 Rem. / 5.56mm NATO Rifle Semi-Automatic, Gas Impingement System AR-15 Style rifle. A team of the finest firearms manufacturers in the U.S.A. has been re-assembled to bring to market the highest quality AR type rifle possible. These good Maine folks - most of whom are former employees of Bushmaster Firearms - offer many years of experience in the industry, and all look forward to working with you, to serving your needs, and to building you a great rifle. When the people who bought Bushmaster in 2006 decided to move it 'lock, stock and barrel' out of Maine to New York in 2011, the original Bushmaster owner, Mr. Richard Dyke was left with both a dilemma and an opportunity. Almost to the day of the 2011 move, Mr. Dyke's non-compete clause expired. He still owned the property where Bushmaster had been built, and knew all the workers - now laid off - who had helped him build it. He made a decision to 'get back in the game' and promptly put an email out to many of his former employees and friends asking if there was interest in joining him for a new project. With a resounding 'yes' of support, he gathered the financing in two days, and started bringing people back into their long-time Windham manufacturing home. Phoenix-like, Windham Weaponry was on the rise. Within three months, the first productions models of the new Windham Weaponry line had been perfected and delivered. Quality, fit, finish, durability, accuracy and value were all superb - giving credence to Windham Weaponry’s motto 'The Quality Goes In, Before The Rifle Goes Out'. The firearms industry and consumers welcomed this new effort warmly, old friends and contacts were re-established, and sales grew. In less than a year and a half, Windham Weaponry had brought back almost 70 employees, benchmarked impressive sales numbers, and established their name as one of the pre-eminent firearms manufacturers in the country. The press heralded it as 'truly an American success story', and all due to the vision of its founder. Further growth for Windham Weaponry has already been planned and implemented. NO SALES TO CALIFORNIA, NEW YORK, MASS, NJ, COLORADO, HAWAII OR WHERE BANNED BY LAW. KNOW YOUR STATE LAWS. Caliber - 5.56/.223 Model No. - WW-CF1 (SRC) Barrel Length - 16" M4 Step Profile Barrel Type - 1 - 9" Twist Features - Chrome Lined Barrel with A2 Flash Suppressor Finish - Carbon Black Features - Includes one 30 round AR magazine Features - Picatinny Rail for Optic Features - Forward Assist and Dust Cover Included Capacity - Will accept standard AR mags - 30 Rounds Length - Overall: 36.125" Extended (32.375" with Telestock collapsed) Weight Unloaded - 5.85 pounds without magazine ASG Global, Inc. dba Whidbey Arms 11042 SR 525 Suite 128, Clinton WA 98236 Toll Free (855) 230-1911 Direct (360) 770-9079 Fax (855) 282-7557www.whidbeyarms.comFollow us on Facebook: www.facebook.com/WhidbeyArmsBrowse more Windham Weaponry 223/5.56 for sale rifles.