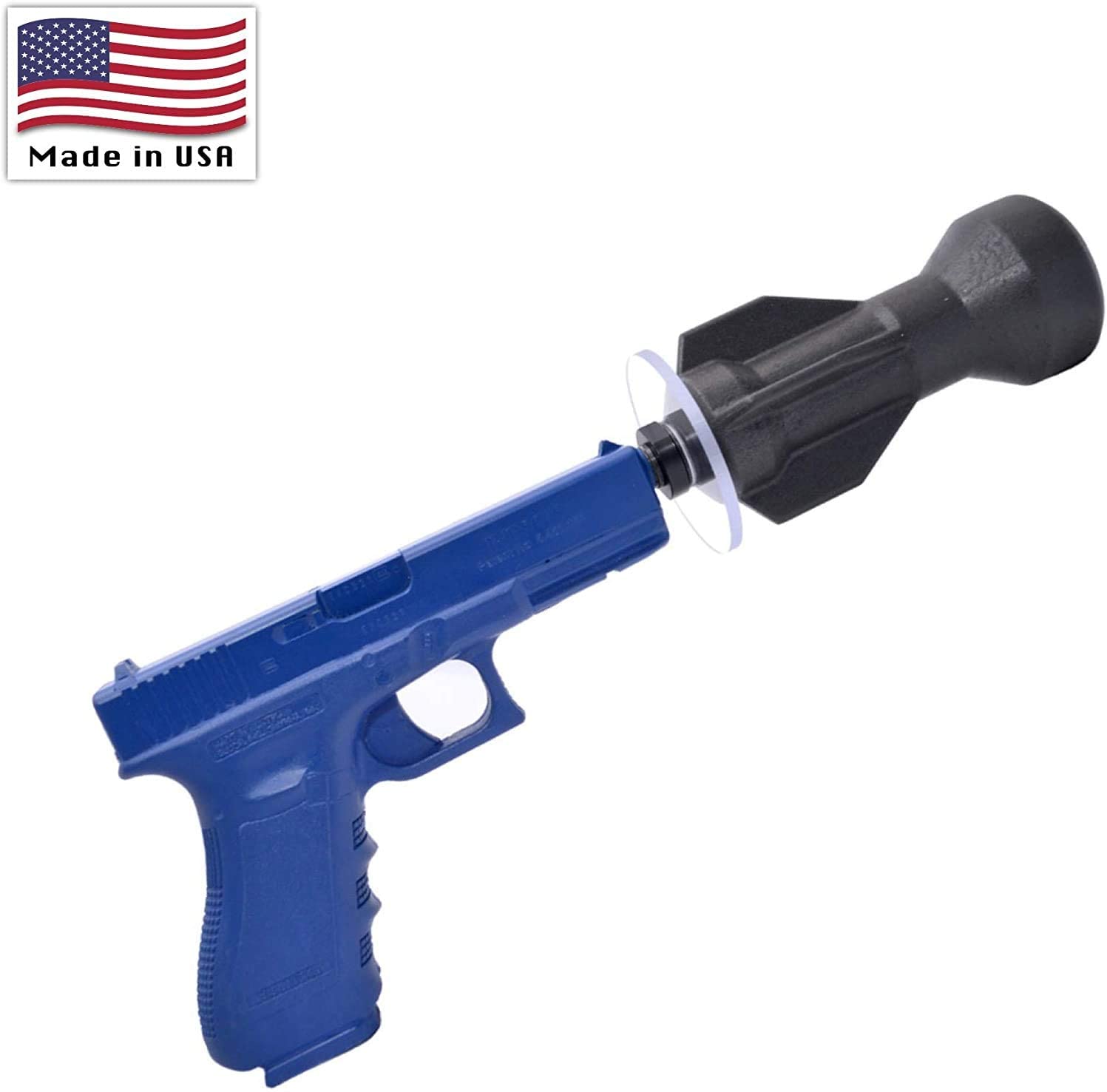 WASP Weapon is a firearm accessory designed to convert your pistol into a dual-use personal defense system. The WASP weapon accessory offers the user the option of using "less-lethal" force before resorting to the lethal force of a fully functional firearm, if necessary. This dual-use personal defense system allows the user to fire the WASP impact baton and then immediately and seamlessly use the same firearm to continue firing standard 9mm ammunition - No modification or additional action required. SYSTEM REQUIREMENTS: 1. A modern 9mm handgun in good working condition. 2. A threaded barrel with 1/2"x28 threads designed for you handgun. 3. Working knowledge of firearm safety, handling, and use. 4. 18 years of age and legally permitted to operate firearms. We also offer a base kit, check out the product: www.amazon.com/dp/B083ZHYT1F

Login or register to post comments
By slugchucker, 2 weeks ago

Load it up w/ a shaped charge & you have yourself a “panzerglock”, or w/ tannerite to dispatch that old refidgerator out in the yard “frigidairfaust”?

up
0 votes
down
0 votes
View score
By WesternStar, 2 weeks ago

Is that a butt plug on the end of a gun? Well, it would work well against Antifa....

up
1 vote
down
0 votes
View score
By WooHoo2You, 1 week ago

"Antifa" the imaginary creation that makes wingnuts piss their pants....

up
0 votes
down
1 vote
View score
By tabmpierce, 3 weeks ago

Ok, I was laughing at this but it is actually kind of interesting. This thing would knock the crap out of someone before you shot them with the real bullets. It doesn't require you to change to a different magazine. I could see it as a nightstand option with kids in the house. There is a guy talking about it here and he shows a video of it being fired.

I cant wait to see the video were some really stupid people decide to test it out on themselves ...got to love how social media makes people stupid.

up
1 vote
down
0 votes
View score
By Flattop, 2 weeks ago

I can see this as a court-justifiable reason for the threads on my barrel, and a defensible reason as to why you emptied half a mag into the perp after the "device" failed to hit or stop the perp. Think of next steps...

Regardless, when did Amazon reverse their policy against gun parts to be listed?

F-ing ridiculous. One shot would rarely drop a determined asailient and or someone on drugs. Then now your in deep crap and most likely going to die unless you have a back up plan.... just tactically ridiculous. Maybe for a stray dog or something..... lol

up
1 vote
down
0 votes
View score
By RighteousBooty, 3 weeks ago

make it a net gun and then we're talking

up
0 votes
down
0 votes
View score
By Letec, 3 weeks ago

It's a real woman pleaser it is!

up
0 votes
down
0 votes
View score
By MillennialGunslinger, 3 weeks ago

Just wait until they come out with the v2 version - Ribbed for her pleasure!

up
1 vote
down
0 votes
View score
By Vysir, 3 weeks ago

The reviews seem like they crawled right out of an as seen on TV advertisement.

Yeah, this seems like a terrible, terrible idea. I can imagine aluminum and foam are going to hold up great to point blank 9mm rounds. I mean, I'm sure you're not going to want to get in a fair amount of practice to understand range and how it's going to completely throw off the balance of your gun. Ffs they advertise it for "pistols" then say you need to be "18+."

A review specifically stated that he put the first burglar out of commission with the wasp and had to put the other one down because he didn't buy the two pack! Those are obviously real reviews and not shills you sound like a hater! Just kidding this is a stupid idea and only a bernie voter would fall for this meme garbage. This website has gone downhill since the domain switch.

up
1 vote
down
0 votes
View score
By WooHoo2You, 2 weeks ago

If Trump gets a second term this might be the only "firearm" that survives his executive orders. Oddly enough Barney never took anybody's guns or suggested red flagging people before due process.

up
0 votes
down
0 votes
View score
By Flattop, 2 weeks ago

While this is true, it sure beats getting Beto as gun Czar. Blondie almost deregulated suppressors.

up
0 votes
down
0 votes
View score
By WooHoo2You, 2 weeks ago

Didn't Trump also support banning suppressors? Odd how one sided some people's memory can be. You have to name 9 different people to match the actions of a single, orange anti-gun tzar.

up
0 votes
down
0 votes
View score
By Flattop, 2 weeks ago

The facts: The Sportsmen's Heritage and Recreational Enhancement Act (SHARE) to deregulate cans (2017) had momentum, but was derailed by the (in)convenient LVG shooting.

After that we lost bump-stocks, though we had already regained braces.

The truth is that the future or legally-armed citizens gets darker every day, but the left brings a tornado to speed it up. Then they defund the police so they can use those funds for their armed guards.

up
0 votes
down
1 vote
View score
By LibtardTbagger69, 3 weeks ago

This guy gets it

In my state at 18 you can private purchase , and open carry a pistol. Ironically enough also recently named as the safest state to live in when it comes to violent/gun related crimes.

Gonna be lazy and ask what state? I know it's not next to illanoy