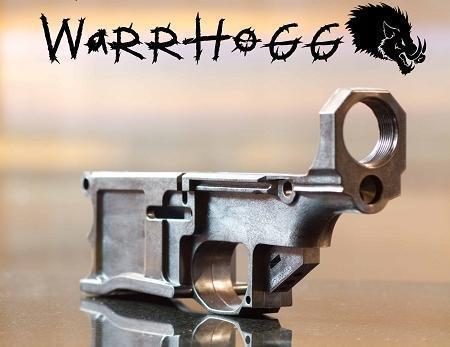 After two years of planning, design, engineering, and testing, we're proud to introduce the industry's first reinforced polymer receiver designed for the DPMS styled .308 in an 80% format. A jig and all drill bits are included in this package.

Industrial strength, finest reinforced polymer material....nothing held back.
Feel the difference the second you pick it up.
Rock solid frame, injection molded from a fully automated system that was two years in the making.
WarrHogg Design Features:

Coupons for Right To Bear store

So Im ok with a polymer lower say on an AR style .22 lower and am a little sketchy about a polymer .223 lower, BUT no way in hell would I trust or build a .308 lower made of polymer! The pressures in a .308 vs. a .223 are immense. This polymer on firearms is getting a bit dangerous and out of control in my opinion. I dont see the point in trying to make a .308 AR Lower out of tupperware. Its easy to see these manufacturers dont fully trust polymer either as they are constantly changing these and adding "reinforcements" made of steel and or aluminum. That right there says alot. I would not risk having a polymer rifle come apart in ones face or it failing when a life is on the line.
You certainly are entitled to your own opinion and I will respect that, I ask you do the same. If youd like to have a discussion and respectful debate Im ok with that too.

up
1 vote
down
0 votes
View score
By Ownthenight01, 4 weeks ago

But you're okay with that polymer lower on 40 caliber Glock?

up
0 votes
down
0 votes
View score
By Thorax, 4 weeks ago

40 short and weak doesn't exactly have the same punch as a 308.
You don't see any 44mag poly frames, hell the Tanfoglio 10mm poly frame is terrible about breaking and there are plenty of reviews that back that up.
A 40 might as well be a popgun in comparison to a real caliber. There's a reason CZ steel frames are the de-facto standard in competition.

up
0 votes
down
0 votes
View score
By WhiteFlour, 34 months ago

Polymer .308? Yeah, no thanks. We aren't talking handgun frames here.

There's a reason the government issues them in 7075.

up
3 votes
down
0 votes
View score
By ElCero, 34 months ago

I'd like to ask a sincere question. Why would someone be a fan of 80% lowers? It's only purpose seems to circumvent the (very easy) path to legal and proud gun ownership. If you want to illegally obtain an AR, this seems like the only reasonable way to go...so why are we so proud to sell these?

up
0 votes
down
5 votes
View score
By Thornhulk, 25 months ago

The common realistic answer is people like to build, "the AR15: Legos for men". After the first couple off the shelf receiver builds I started asking, "Well what else can I do?" Down the rabbit hole I go; 80%'s, cerakoting, multi caliber, anodizing, and now 80 glocks. Honestly if I had a better mill set up I'd want to try a 0%, but that'd be way down the road. Slapping together an AR is well and all, but there is another level of accomplishment felt after a raw 80 build. Regarding what gessed said, no, no it is not cheaper.

As far as the "illegal" part goes, most criminal morons don't have the patience to build an AR let alone an 80. Glock, maybe, but there is a way more effort on the machining skills end of things and we're talking about people that can't read on a 3rd grade level. It would be way easier for them to go though their criminal bros to get one or just do private transaction.

To address Janizary, while I hope to never see the US fall into such a state of fascism in my lifetime; a gun that doesn't exist, has no reasonable suspicion to be confiscated. Hopefully that's just mild paranoia, but with what the 2020 Dim primary contenders are spouting I don't count out a resurrection of the AWB.

up
3 votes
down
0 votes
View score
By guessed, 25 months ago

It's cheaper. Welcome to gun.deals, the gun website for saving money.

up
0 votes
down
0 votes
View score
By Janizary, 34 months ago
ElCero, it is not illegal to create an AR-pattern rifle from an 80% lower. It is completely lawful under federal law to build your own unserialized/unregistered firearm (as long as it is not intended for sale). Some slave states may have restrictions, but those are still the minority at this point. Two primary reasons for lawful builders to make their own are: (1) No 4473, no record, no one knows you have it and it therefore is not on a list to be seized should your benevolent overlords decide that less equal animals may no longer own firearms. Call it paranoia, or call it preparation. Either way, both are legal at this time. (2) Some folks just like to build things a bit more complicated than just parts assembly. Some just to say that they could do it. (3) and the third (unlisted) reason: Why the hell not? If it is legal, why question it? Same goes for 3D printed receivers, parts, and Mr. Wilson's Liberator. It is legal, therefore why question it?
up
5 votes
down
0 votes
View score
By theriddler, 36 months ago

up
0 votes
down
0 votes
View score
By guessed, 25 months ago

It comes with its own jig.

up
0 votes
down
0 votes
View score
By Surculus, 27 months ago

Doubtful. If you look at the pic of the lower, there are some pointless stylistic elements to it that appear (to me) to exist solely for making the included jig useless for anything but another one of the same plastic lowers [which doesn't need one, since it will come with another single-use jig of its own.] I could be wrong, but that's how things look from where I'm sitting.

up
0 votes
down
0 votes
View score
By BrandonMski, 36 months ago

Not to step on anyone's dick but I'm 99% positive that Tennessee Arms Company was the first. It's been at least 2.5 years since I bought one from them.

up
0 votes
down
0 votes
View score
By BrandonMski, 36 months ago