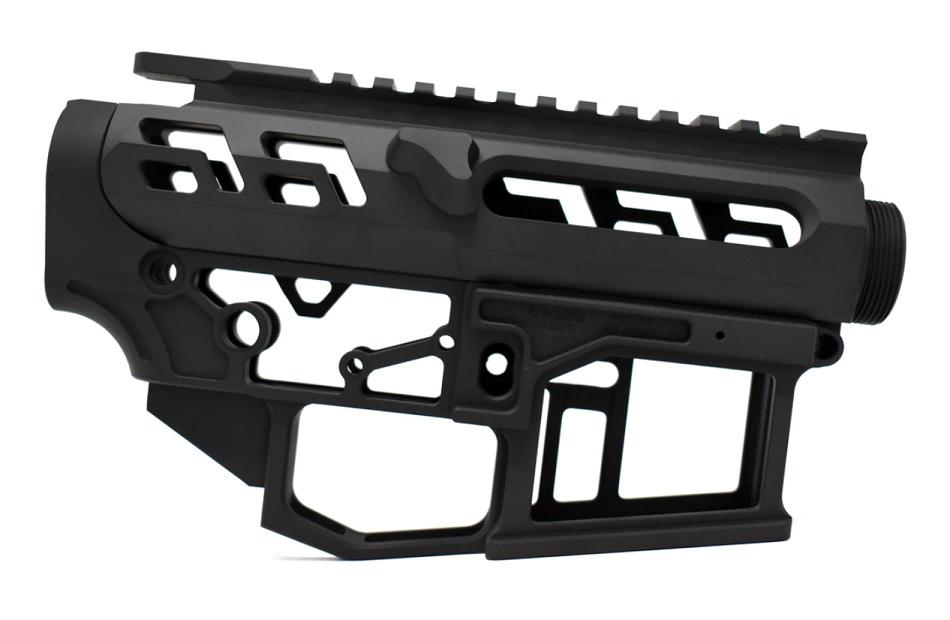 The War Dog Industries WRC-15 Advanced Lightweight Billet Upper and Lower set is precision cut from high strength billet 6061-T6 aerospace grade aluminum with an exceptionally lightweight design. Excess material has been removed wherever possible without reducing the integrity of the receivers, allowing this matched set to weigh in at just over 14 ounces.

Each receiver set is hand deburred, matched, and inspected for dimensional accuracy, ensuring you receive the highest quality set for your build.

We want to offer our customers more for their money when it comes to purchasing a top of the line receiver set. Enhanced modern lightweight designs are what sets War Dog Industries receiver sets apart.

War Dog receivers are sold without the markings for the safety selector that read "SAFE" and "FIRE". However, our design has in no such way altered the functionality of the trigger, safety selector, selector detent/spring placement within the standard military specification.

The safety selector on our advanced lightweight lower receivers work in the same manner and function for safe, fire, automatic fire as would any other standard AR-15 lower receiver.

Coupons for Right To Bear store

Login or register to post comments
By Cytofusion, 2 weeks ago

Looks cool I guess, but all I can think of is how many magazines would you get through before the back pressure from the bolt carrier on the hammer finally causes the trigger pins to break through that tiny amount of material and leave you with a massive paperweight

up
0 votes
down
0 votes
View score
By jonusmoon, 1 month ago

I built mine in January, and I've put it through more coyote hunting than most of the naysayers on here could imagine. It functions perfectly. I've never had an issue. I spent 12 years in the army, as an infantryman, and I've put an ar rifle through things they were never designed to do, and these actions will never be an issue for the hunter or the casual shooter. One thing that it does really, really well is allow heat to escape. Heat is your enemy. My barrel will cool way faster than yours, plus, your mom thinks my gun is cool.

up
1 vote
down
0 votes
View score
By Thorax, 2 weeks ago

Exactly how does a receiver set allow your barrel to cool quicker ?
Here's a tip: it doesn't.
The barrel is steel of whatever sort and will cool at a given rate no matter what it is attached to (save an airconditioner or ice bath).
Of course if you have the finned JP barrel heatsink it might help.
https://www.jprifles.com/1.4.5_hs.php

up
1 vote
down
0 votes
View score
By jonusmoon, 2 weeks ago

Well fella, the gas in an ar rifle is cycled back into the upper receiver, forcing the bolt back and clambering another round. That gas... it's hot. The hot gas used to cycle is precisely why ar platform rifles heat up the way that they do. If you don't believe me, drop the cash on a piston Upper and see the difference. Now, allowing more air flow to the chamber, bcg, and both upper and lower recievers allow for more air to flow around the chamber and bolt, which would allow it to cool a little bit better. I believe one could make the argument that the cooling is done by both convection and conduction to some degree by allowing more air flow to the above mentioned parts, thereby cooling the barrel.

up
0 votes
down
0 votes
View score
By Thorax, 2 weeks ago

The barrel is heated by the pressure of the explosion.....not the flame, the pressure.
Look up thermodynamics.
The tiny bit of blow from the normal cycling is nothing in comparison.
Take ANY AR style rifle, gas or piston, heavy frame or skeleton, and rip off a fast 30 rd mag dump.
Set the rifle down and 10 minutes later pick it up by the barrel. Bet you won't do that again.
Unless the barrel is forcibly cooled by an external *something* the cooling rate will be static. The receiver has nothing to do with it....unless you've mounted fans on it.

up
0 votes
down
0 votes
View score
By jonusmoon, 2 weeks ago

You are clueless. I will refrain from further argument about this matter. Since you are so apparently familiar with thermodynamics, perhaps you are familiar with two common methods used to cool materials that are exposed to high heat levels.

1. Exposure to air flow, ex. An open reciever allows a considerably higher circulation of air at ambient temperature to the heated surfaces, (again, chamber and upper reciever where they are mated). Think about how when you are shooting any type of weapon, leaving the action open allows the barrel and chamber to cool more quickly.

2. Surface area exposure. I won't waste my time explaining this.

And, just to put a fine point on the stupidity of your argument; where did I mention flame? If you don't know that a piston Upper cools much more efficiently than a direct impingement Upper, (which you don't, because you just said that you don't), fear not peasant, they are beyond the financial means of most people who live in their mother's basements and start arguments with people like me on apps that nobody cares about. I am a millwright by trade and have spent years designing methods to aid in the cooling of equipment that is exposed to prolonged heat. You probably watch a lot of SpongeBob and yell at your mom when she forgets to refill your snack drawer. Just walk away, you aren't equipped to challenge me.

up
0 votes
down
0 votes
View score
By Thorax, 2 weeks ago

Like I said sugar britches, to get airflow (where you THINK some is occurring) air must MOVE.
Mount fans on your stupid mall ninja pew pew and call it a day.
No matter what, you will have to wait for the barrel to cool.
Why do you think a high end competition AR company like JP makes a barrel heat sink?
Fucking duh.

BTW, you don't have to try so hard to justify what is obviously a stupid purchase.
Are you happy with it ?
There ya fucking go.

up
0 votes
down
0 votes
View score
By cheerio, 1 week ago

This was thoroughly entertaining but I think @jonusmoon is correct. You can hate me too, im ok with that...

up
0 votes
down
0 votes
View score
By Ownthenight01, 2 weeks ago

up
0 votes
down
0 votes
View score
By Jfrancis, 6 months ago

I built one and love it.

up
3 votes
down
0 votes
View score

Not as stupid as the folding Glock but pretty close

up
1 vote
down
0 votes
View score
By KillaGorilla, 7 months ago

going into battle this is a no go. but for the other 99.9% of gun owners who mainly build fun range toys...... these sets are great looking and unique. have several skeletonized weapons myself and they are high quality.

by my calculations this set should be worth about $47.12 if we are pricing according to the amount of actual material you are buying... lol

up
1 vote
down
2 votes
View score
By santana40, 8 months ago

About as practical as a condom with 3 holes

Horrible idea. Used for “Display Only” I Hope... Why not just make a “Skeletonized” magazine for it too. See how well it works out for ya. RTB knows it needs to get rid of “This Inventory” Suckers will buy it.

up
1 vote
down
0 votes
View score
By cteeder24, 8 months ago

Yeah..... Not going there. Way too much important stuff exposed. Hope they didn't make too many of these. Lots of room for crap to get in there and gum up your rifle.

up
1 vote
down
0 votes
View score
By polartx, 8 months ago

How else are you supposed to gather up all the lint in your range bag?

up
0 votes
down
0 votes
View score
By Youngguns88, 8 months ago

up
5 votes
down
0 votes
View score
By Gaujo, 8 months ago

That thing could totally break if you fell on it

I havent used a skeletonized lower but I love my skeletonized upper. This set seems like a good option at a good price

up
1 vote
down
2 votes
View score
By skeetteach, 19 months ago

It would actually be pretty cool to see some slow-mo video of this thing being fired.

up
5 votes
down
0 votes
View score
By Thrilliot, 19 months ago

This has to be the most impractical thing I have ever seen.

up
4 votes
down
0 votes
View score
By NOLARick, 19 months ago

That is sexy. Anyone tried these before? Thinking about a new piston build.