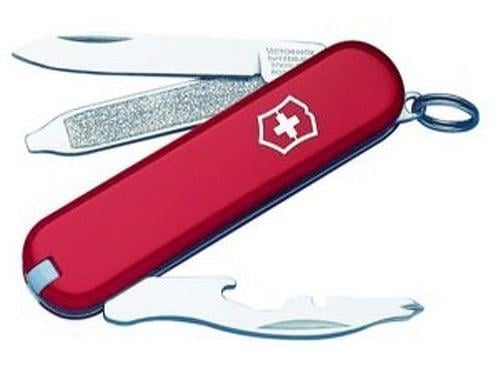 In 1884, Karl Elsener opened his cutlery workshop in Ibach, Switzerland. In 1891, he obtained the first contract to supply the Swiss Army with a "Soldier's Knife" which was officially registered on June 12, 1897. Since that time, the Victorinox Original Swiss Army Knife has become well-known in more than 100 countries for precision, quality, functionality, and versatility. It's time you enjoy a new Victorinox multi-tool. You will find it to be an invaluable companion.
From the renowned company that created the Swiss Army knife a century ago comes the Swiss Army Rally pocketknife, a compact multi-tool for on-the-spot use. Measuring 2.25 inches long, the Rally is stylishly cased in a classic red housing with the familiar Victorinox logo on the side. More importantly, the Rally contains several handy mini-tools, including a small blade, a nail file with a screwdriver, a cap lifter with a magnetic Phillips screwdriver, a wire stripper, a toothpick, tweezers, and a key ring for easy transport.
The Rally is stylishly cased in a classic red Swiss Army housing.
As with all Victorinox items, the Rally is made to exacting standards, with dozens of steps going into its construction. Victorinox attends to every detail, from selecting the finest materials to performing the final inspection. In addition, each individual tool has been hardened in a different way to stand up to its designated use. The Rally weighs 0.8 ounces and carries a lifetime warranty.
Rally Tools
- Small blade
- Nail file with screwdriver
- Cap lifter with magnetic Phillips screwdriver
- Wire stripper
- Toothpick
- Tweezers
- Key ring
About Victorinox
In 1884, Swiss cutler Karl Elsener set up shop in Ibach-Schwyz, installing a waterwheel in Tobelbach Brook to run his grinding and polishing machines. Thus began what would become the international brand name Victorinox, a combination of Victoria, for Elsener's mother, and "inox," or stainless steel. Today, Victorinox produces watches, luggage, clothing, and, famously, Swiss Army Knives. The original product dates to 1897, when Elsener patented the Swiss Officer's and Sports Knife he supplied to the Swiss Army. Following World War II, American servicemen and women shopping in PX stores shortened the name to Swiss Army Knife, which lives on in English-speaking countries around the world and has become a metaphor for versatility.
ASIN#: B000FNI1V2
Model number#: 54021