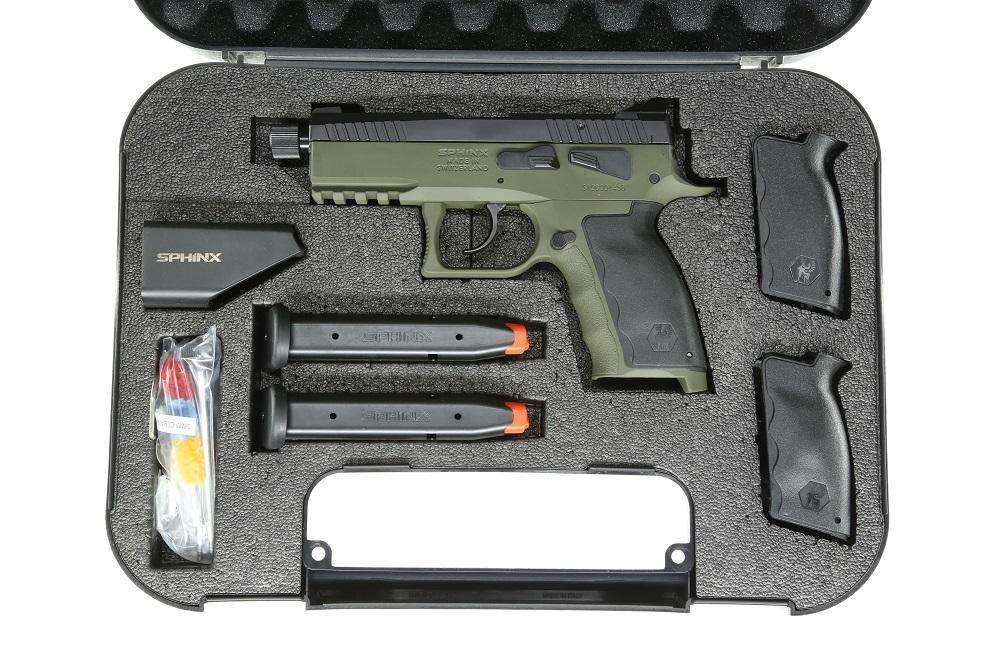 The SPHINX SDP Compact is manufactured in Switzerland to the highest standards.

The SPHINX SDP Compact Alpha is a duty-sized pistol that can adapt to virtually any role. Every design feature on the SDP Compact Alpha is tailored to maximize performance, quality, and ergonomics. The competition inspired trigger is very smooth with a clean break and short, crisp, reset. The steel slide is machined from billet and is hand fitted to mate perfectly with the interior, full length guide rails, of the billet aluminum upper frame.

The polymer pistol grip features interchangeable back-straps to adjust length and width of the grip, the grip inserts are specifically designed to maximize contact with the support hand for added control. Also for added control, the high trigger guard shape and beaver tail allow for high hand placement on the pistol frame to compliment the low bore axis of the barrel, which allow the shooters to easily manage recoil.

A Picatinny rail on the frame allow for the addition of modern tactical shooting accessories. The front and rear cocking serrations offer different options of firearm manipulation and the dotted front sight contrasts with the black rear sight for quick target acquisition.

Ambidextrous features include the decocking lever and a magazine release that can be switched to either side. The slide release lever also serves as the take-down pin and is located on the left side of the Compact Alpha. Every component of the SDP Compact is manufactured to the highest standards and tolerances are extremely tight.

Derived from competition and built for duty use, the SDP Compact is the ideal gun to suit your needs on the job, in the home, or in the shoot box.

Login or register to post comments
By busarich, 36 months ago

I ordered one 4 days ago and am waiting for this. A guy I work with has one and keeps telling me how much of a good gun it is. Plus price seemed like a decent deal. Couldn't find it cheaper online.

up
0 votes
down
0 votes
View score
By pokedex, 36 months ago

I see one guy down there who really likes this gun, but does anyone else have experience with these? They look pretty neat and I'm trying to find a good gun, as i just started shooting. Looks like there's a big discount on this one. Any ideas why? Thanks in advance

up
0 votes
down
0 votes
View score
By tacticalreload, 36 months ago

My guess is because both Kriss and Sphinx (especially the latter) are in a perpetual state of financial distress and these guns don't sell all that well. If things go further south down the road, you might have issues getting factory support if you need it. (And I'm not sure how great that CS is right now anyway.)

I haven't owned one, but I've previously thought about picking one up so handled a couple and shot one. The fit is very good... at least on par with CZ. The finish on the non-black models is cerakote so you get what you get with that one. Quite frankly, I've had a number of guns in cerakote and, as long as it's prepped correctly before application, it's reasonably durable. However, it's not great as far as wear is concerned if you're hard on your guns. That being said, the black versions are not cerakoted but rather are PVD finished like SIGs (and I have no idea how they wear over time). Honestly, CZ's finish isn't anything to get excited about either anyway so the Sphinx is probably at least as good in this respect.

As far as shooting, the gun is respectably accurate; and the single action pull is very nice for a traditional DA pistol. However, the DA pull is not great... certainly not as good a SIG or Beretta w/ a D-spring or even an actual CZ. But I've read that it's easy enough to acquire the parts to remedy that problem and make the DA pull better.

Other than that, it's got all the typical CZ pros and cons. The reverse rails mean it's a lot harder to get good purchase on the slide. The bore axis is reasonably low if you care about such things (I don't). The design is proven to be reliable and durable.

Personally, I chose not to pick one up because I have a number of other guns that fit into basically the same role already. However, if you want one and understand what it is (and what it isn't), then you probably won't be disappointed. Since you said that you have just started shooting, you might also want to consider other guns in the price range like the SIG P229 if you're specifically looking for a double action pistol.

Keep in mind that there are two flavors of Sphinx pistols out there right now... some have a full aluminum frame (just called the "Compact") while others have a combo alloy and polymer frame (like this one with "Alpha" in the name).

up
2 votes
down
0 votes
View score
By yellowlt4, 36 months ago

This gun embarrasses the Legion.

up
1 vote
down
1 vote
View score
By JamesWWIII, 36 months ago

up
4 votes
down
2 votes
View score
By yellowlt4, 36 months ago

lol...coming from you that's funny

So I suppose I got downvoted for experiential legitimate information. Interesting.

up
1 vote
down
1 vote
View score
By JamesWWIII, 36 months ago

You got downvoted because you are an idiotic twat who doesn’t know shit from shinola when it comes to quality guns.

Any SIG Legion shits all over this gun, believe me.

up
3 votes
down
4 votes
View score
By tacticalreload, 36 months ago

I'm going to go out on a very short limb here and say that it's pretty obvious that those two are the same person.

Just because it isn't made by a mainstream manufacturer doesn't mean it's sub-par. matter of fact, the Legion series is a joke. The sphinx has a teflon buffer (like HK) a polygonal barrel (like HK) is based on the CZ 75 (a fairly proven firearm, but you may not have heard of them) and has a SRT trigger (like Sig!) that in terms of single action feel is far and away better than a Legion. Also the finish won't mar if you sneeze on it (like a Legion!). I get it, you really want to be cool and all, but it's ok. Let me know when ww3 starts.

up
1 vote
down
2 votes
View score
By JamesWWIII, 35 months ago

I own two CZs, dipshit. A 75 and a 97, so I know exactly how well they make their guns. I also know how much quality goes into a SIG Legion gun, as my 229 is one of the best shooting mass production pistols I’ve ever shot. Finish on mine is fine, and it’s no safe queen, I assure you. As an owner from the first days they were available, I’m quite familiar with the haterade that people who can’t afford Legions love to spew from behind their keyboards, but everyone I’ve ever known who has spent any time behind one of these guns knows just how good they are.

up
3 votes
down
2 votes
View score
By GlockmanForever69, 36 months ago

says the dude with wwIII in his name lol believe me! FAKE NEWS!

up
0 votes
down
1 vote
View score
By jimmyjimjam, 34 months ago

Thanks for the info. I couldn't resist. I ordered one!

My edc is a sphinx alpha compact, and I also have a sphinx compact (milled aluminum grip; not polymer). I sold my 229 legion, tactical, enhanced elite and my 225a1 because they can't touch these in terms of single action trigger feel, indexing ability, and overall fit and finish (Titanium nitride with ceracote overlay). With meprolight night sights, this is the most fantastic pistol I own aside from my HK mk23. At 10 yards, a 5 shot group fits inside the same ragged hole with not a lot of effort. Insanely well made; not a machining mark on the gun, and all together it's dead nuts reliable. 1000's of rounds through my alpha in particularity 0 failures. If you get one, get two however, as replacement parts are difficult to come by should the need arise. Polygonal barrel, phenomenal grip texture, and bank vault lockup make this gun a must.

up
6 votes
down
2 votes
View score
By robbarron, 36 months ago

The only issue I have had and I love them too are MagTech Hollowpoint which seem to be just a tad longer then other's and locked the gun up in a way that was impossible to clear without a tool.

up
0 votes
down
0 votes
View score
By yellowlt4, 36 months ago

My subcompact was very much the same, it had a few ammo related issues, sent it to Kriss they took care of it but I no longer have it. My only real complaint is the grips themselves, the rubber is good but not great, would love to see some other options but I doubt this gun will ever get any aftermarket options due to it's niche status and the grip design itself.

up
0 votes
down
1 vote
View score
By tacticalreload, 36 months ago

So your pistol had to be sent back for repair because it had a short chamber plus you felt like the grips were not of great material; but you still feel like this pistol "embarrasses" the SIG?

up
1 vote
down
0 votes
View score
By yellowlt4, 33 months ago

Nope, neither had a short chamber, they changed a spring on the subcompact, the compact is still running better than any gun I've owned in the past 25 years. And yes, this gun beats every SIG I own this side of the P226 X5 SAO and as far as build quality goes, it's on par with the X5 that's 2.5 times the price.

up
0 votes
down
0 votes
View score
By pokedex, 35 months ago

In all fairness, I've read of huge defects in Sigs, especially the legion series pistols ranging from finish problems to air bubbles/general inconsistencies in the frame construction. I'm sure it's decent, but it ultimately seems to be a $650 pistol with trijicon sights and a different trigger shoe without modified trigger linkage. This gun, even if it isn't mainstream, seems to be a higher quality firearm hands down. Not trying to "trigger" anyone, but it's silly to get defensive over a flippin' firearm.