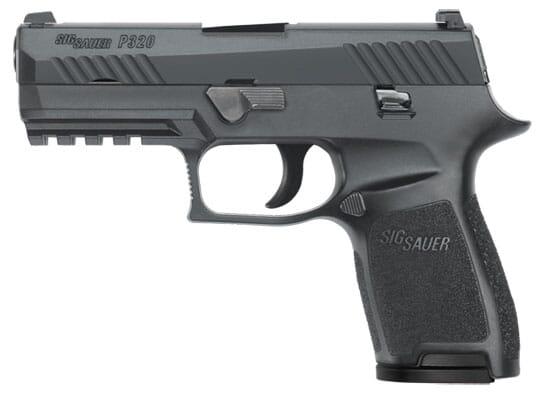 The Sig Sauer P320 .40S&W Compact with SigLite night sights is a polymer-framed service pistol with an enhanced level of safety. The P320 has easy maintenance without requiring the operator to pull the trigger or use a special take-down tool. Slide and barrel conversions allow different caliber and barrel lengths, and the P320 is able to be personalized to any hand size due to its modular grip frame and removable fire control assembly.Showroom demos may have light blemishes or handling marks but are not mounted or fired.Possibly the most versatile handgun so far this century, Sig Sauer’s P320 is a perfect example of the innovation that Sig Sauer has become known for. The P320 pistol's modular design allows the shooter to quickly and easily change not just the caliber but the size and fit of the handgun. It’s the P320’s versatility and Sig Sauer’s proven reputation of producing reliable and accurate firearms that secured the P320 the coveted position as the pistol that will replace the Beretta M9 as the United States Military’s primary service pistol in the form of the XM17(Full Size) and XM18(Carry Size). What's the secret behind the P320's modularity? Well, it's not a secret just a very fresh take on the modular handgun system, the steel chassis that houses the trigger, striker, ejector, and few other components is serialized, allowing the one gun to be configured to meet the requirements of any mission, fulfilling Sig Sauers promise in being The Complete Systems Provider.Additional InformationAvailable in Full, Carry, Compact, and Subcompact modelsAvailable in 9mm, .357 Sig, and .40 S&WUnthreaded and Threaded Barrel OptionsSimple Conversion KitsStriker FiredLightwieght Polymer Grip ModulesMolded Accessory RailIntutitive DissasemblyInternal Safetys and Loaded Chamber IndicatorWinner of the 2016 American Rifleman Handgun of the Year AwardAbout Sig SauerFrom humble beginnings as a wagon to factory to one of the world’s largest firearms, optics, and ammunition manufacturers; the history of Sig Sauer is rich in innovation and achievement. After winning a contract from the Swiss government in 1864 for their Prelz-Burnand muzzleloading rifles, the Swiss Wagon Factory change its name to Schweizerische Industrie-Gesellschaf, the Swiss Industrial Company, better known as SIG. In 1949 SIG developed the SIG P49, the predecessor to the P210 and continued developing small arms for the Swiss military and police. Since then the company has changed its name, acquired other firearm manufacturers, and crossed the Atlantic—setting up headquarters in New Hampshire. However, what hasn’t changed is the innovative spirit that has driven SIG SAUER to develop firearms like the SIG516 rifle, MCX rifle, P320 pistol, and P226 pistol. With clients like the Texas Rangers, United States Secret Service, Navy Seals, and dozens of local law enforcement agencies nationwide; SIG SAUER is there When It Counts.