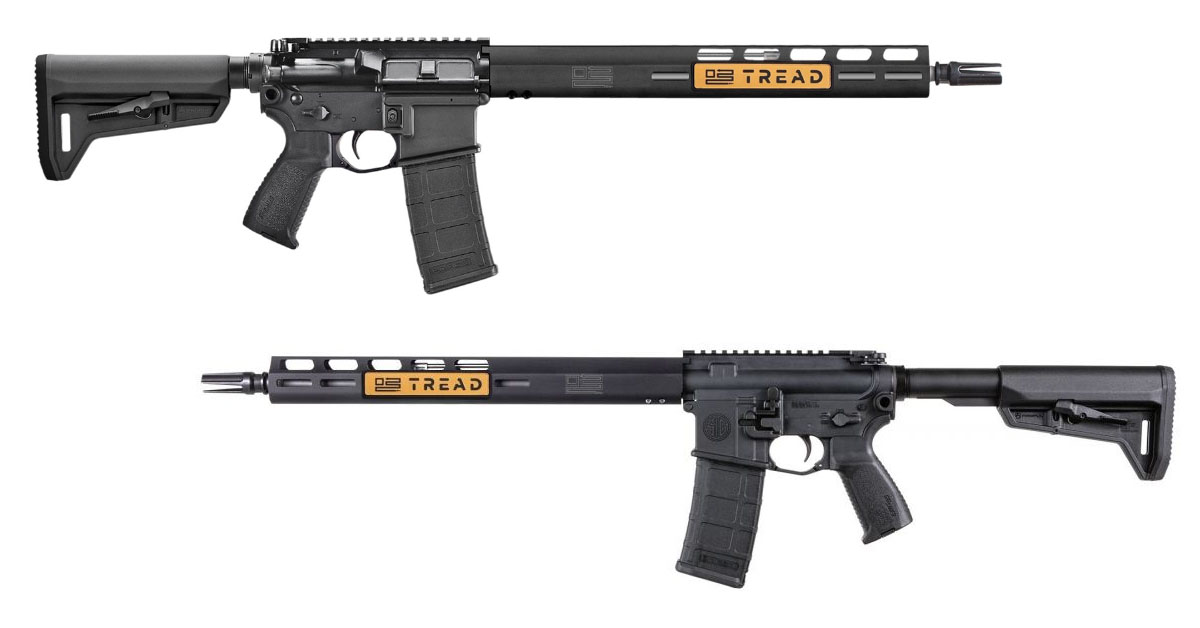 The Sig Sauer M400 TREAD is a step in the right direction when it comes to entry level AR15 platform rifles. The rifle utilizes a mid-length direct impingement operating system and comes standard with features usually only found on premium priced rifles. The upper and lower receiver of rifle are made from aircraft grade 7075 aluminum and have been hardcoat anodized for long lasting durability.

The Sig Sauer M400 TREAD features a full length handguard that is free floated and has lightning cuts for heat ventilation. The handguard features Magpul’s MLOK attachment points that reduces rifle weight and gives the M400 TREAD a clean no-nonsense look. The lower receiver features ambidextrous safety controls and bolt release. The barrel of the rifle is made from stainless steel, uses a natural stainless finish, and is crowned with a 3 prong flash hider. If you're in the market for your first AR15 or just looking for an upgrade at a great price point, the M400 TREAD will undoubtedly exceed your expectations. Don't forget to pick up an optic too! A reflex sight or low power variable scope would compliment the rifle incredibly well.

About Sig Sauer
From humble beginnings as a wagon to factory to one of the world’s largest firearms, optics, and ammunition manufacturers; the history of Sig Sauer is rich in innovation and achievement. After winning a contract from the Swiss government in 1864 for their Prelz-Burnand muzzleloading rifles, the Swiss Wagon Factory change its name to Schweizerische Industrie-Gesellschaf, the Swiss Industrial Company, better known as SIG. In 1949 SIG developed the SIG P49, the predecessor to the P210 and continued developing small arms for the Swiss military and police.

Since then the company has change its name, acquired other firearm manufacturers, and crossed the Atlantic—setting up headquarters in New Hampshire. However, what hasn’t changed is the innovative spirit that has driven SIG SAUER develop firearms like the SIG516 rifle, MCX rifle, P320 pistol, and P226 pistol. With clients like the Texas Rangers, United States Secret Service, Navy Seals, and dozens of local law enforcement agencies nationwide; SIG SAUER is there When It Counts.

Login or register to post comments
By RyanB425, 1 month ago

Just purchased this from Euro Optic. Kyle was amazingly helpful and went above and beyond! Will definitely be purchasing items from Kyle at Euro Optic in the future!

I just purchased this from Rural King. My first AR. They had it for $800 with 10% off for Black Friday. I couldn’t pass it up. I got home and said to my better half... “Now you don’t need to find me a Christmas present!” I have an awesome wife. She just laughed. :)

up
2 votes
down
0 votes
View score
By capitolwon, 1 month ago

Great rifle screwed up by treading on it. Give me the good ole m400 classic at this price and I am in. Last time I physically saw one they were 999.99 at Walmart, so 899 would be a sale for me.

3 things to ditch on this rifle. First is the heavy handguard that doesn't have lightening cuts or mlok slots all the way down. I got lucky and found a Luth-AR handguard that works with the barrel nut. Next are the barrel nut and gas block, both proprietary. Unless you are a Sig armorer, you cannot get your hands on the wrench for the nut. Once it's off, it's off. But to change that, you must use a press the remove the pin (not a roll pin) in the gas block. Haven't yet tackled those yet. Other than those 3 items, I absolutely love this rifle. In over 1000 rounds, only 1 FTF with a Monarch steel case. My first mid-length and definitely prefer it over carbine length.