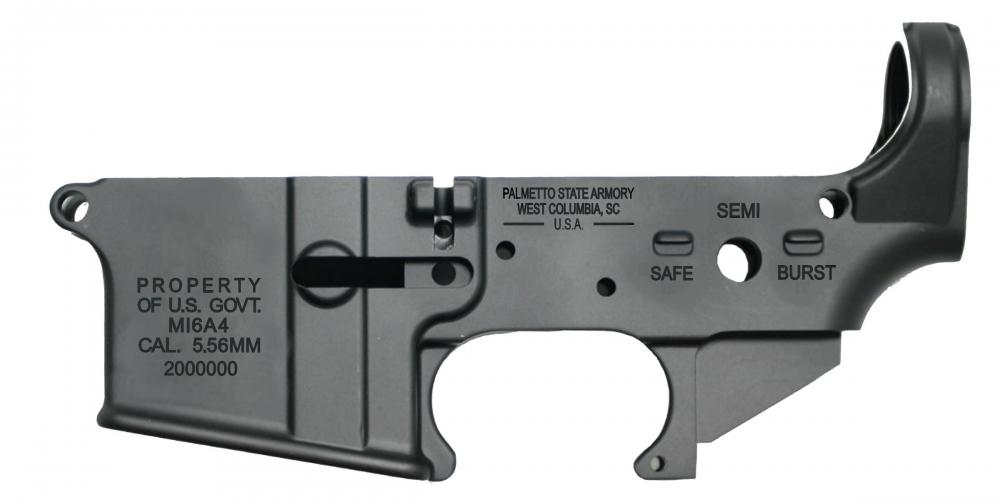 California Buyers - stripped lowers are sent to California as "Long Guns" only.
Please make sure the business name of the FFL you will be using is on your order.
These limited-edition lowers are made using the most advanced aerospace manufacturing technology to produce the industries finest, forged Mil-Spec lowers. Our receivers are machined on a multimillion-dollar, automated, manufacturing system that enables us to produce a product of unequaled quality and value.
These forged lowers are quality made using material is 7075-T6 and are marked "CAL. 5.56MM." to accommodate most builds. The finish is black hard coat anodizing per Mil-8625 Type 3 class 2.
UPC#: 000016471997

Login or register to post comments
By RighteousBooty, 2 months ago

Paid 49.99 for the m4a1 version, it's a tight fitting receiver with clean engravings. not worth 129.99, doesn't do anything a $35 dollar lower can't but was worth the extra $15 on a binary build... the cheapest lowers I see now are around $60 but this lower has somehow almost tripled in price...

up
1 vote
down
0 votes
View score
By snuffy, 4 months ago

According to the 'since added' button info, these were a mere $70 just 6 months ago. Are they being made out of gold now? Guess PSA finally joined up with 'cheaper than dirt' price wise...

PSA seems to have gone all-in with jacking up their prices across the board during this “pandemic.” At the beginning of the year these lowers were $49. There’s no reason these should have increased in price almost 100% in such a short time, but stand by for the PSA fanboys to arrive and defend their honor with ridiculous excuses like “This is the free market at work!” and “PSA is raising their prices to discourage hoarding, so they’re really doing us a favor!”

up
0 votes
down
0 votes
View score
By Thornhulk, 10 months ago

There actually could be a fundamentally sound economic reason for such a maneuver. PSA probably has more trade information than you do, and if they know that their stock is unlikely to be replenished in any kind of timely manner, the astute choice to to raise prices on anything in demand in order to stay in the black as long as you can. By comparison to companies like Cabela's, Midway, or Nell's; PSA's business model always seemed more had to mouth, rather than the larger diversified stores/conglomerates that could handle inventory turmoil by focusing in other sporting areas. If they're being dicks because they can, so be it, but they picked a strange time for that strategy if they have complete inventory available and know things will stabilize soon. They might be pissing a bunch of people off, but they may not have a choice to stay viable. Much like you don't have much of a choice of where to by guns and ammo from right now.

I appreciate the well thought out and reasonable response. I certainly hope that there is sound basis for what they are doing because I have plenty of PSA products. It is simply disappointing to see some of their recent pricing.

up
0 votes
down
0 votes
View score
By Thornhulk, 10 months ago

And I appropriate that you bothered to read rather than knee jerk, need more like that.They're not doing themselves service by having 0 pr response, but it would also not be advantageous for them to to state "sorry, we're out of most things, we've got to jack up the prices to stay afloat". Close to the chest is sometimes better in these situations, even if it makes you look like a jerk. The more I read from industry articles it seems like we've simply hit a place where normal supply has fundamentally underpaced a true peak demand, and that it's at a precipice that could cause several smaller entities to close. My og lgs is begging for inventory for months now, but the shelves keep shrinking.....

up
0 votes
down
0 votes
View score
By LibtardTbagger69, 10 months ago

I love South Carolina and I really like PSA but if you buy a lower receiver with “burst” fire on it and take it to the range. Everyone is just gonna think you’ve poser. This is better left for Vietnam era commando role playing. And even then I would be skeptic

up
0 votes
down
0 votes
View score
By nowosun, 10 months ago

up
0 votes
down
0 votes
View score
By LibtardTbagger69, 10 months ago

Yeah I guess that would make more sense, but it’s gonna cost half as much as an AR for both of those. Too rich for my blood for the time being.