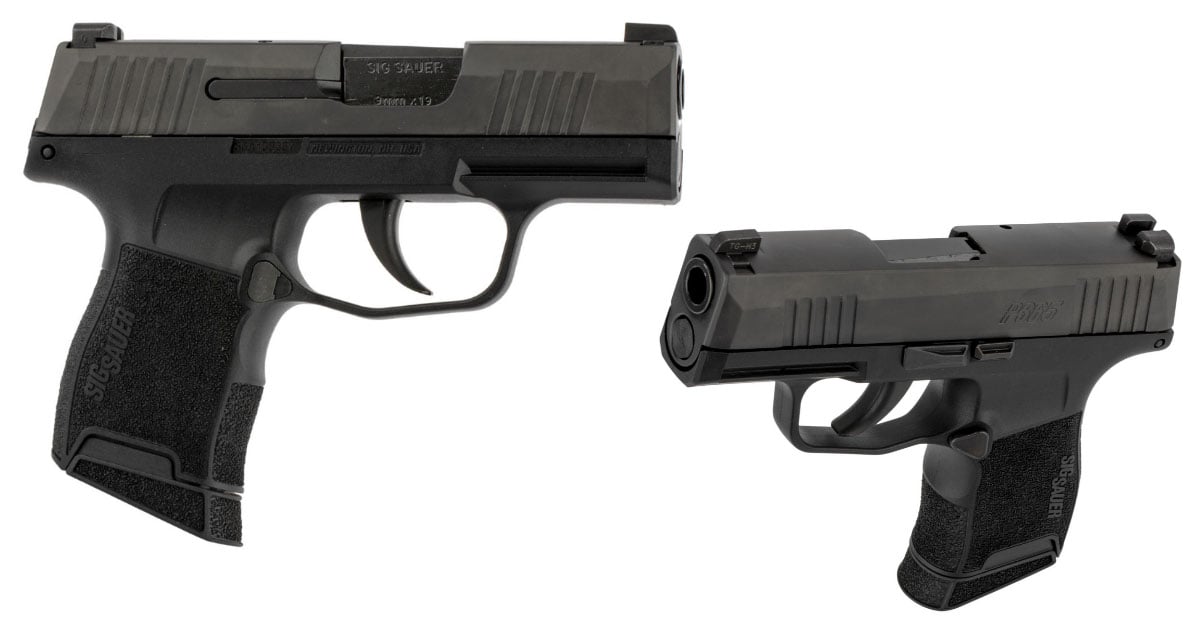 The Sig Sauer P365 truly breaks the mold when it comes subcompact pistols, offering a capacity of 10+1 rounds of 9mm in its tiny frame. Almost all other pistols on the market that compete with the size and weight of the P365 end up with single-stack magazines and 7+1 (or less) capacity. The functionality of P365 does not end with its capacity, the pocket pistol features the same modular technology that is in the award winning Sig Sauer P320 handgun, incorporating a serialized chassis that houses the trigger, striker, and ejector. As the P365 names suggests, this gun is designed to carried discretely, comfortably, and safely everyday of the year.

Additional Features
XRAY3 Day/Night sights allow for safe target acquisition even in dark environments.
Fully textured Polymer Grip for a slip-free grip when shooting.
3.1" barrel is designed to handle +P ammunition.
Extremely lightweight 17.6 oz. polymer frame.
Comes with two 10 round magazines, but 12 round extended magazines are available.
Width of only 1" makes it great for comfortable IWB or ankle carry.

Login or register to post comments
By robnadar, 4 days ago

This is my first buy from this company. Ordered on Monday evening and the firearm was shipped out before Tuesday noon. Excellent service and great price for P365 during this time!

up
1 vote
down
0 votes
View score
By Longlongman, 1 week ago

Very good price for the times

Mine seems to be good, although only 200 rounds through it so far. made late june, has the relief cuts in barrel and new style striker. I have zero wear issues or peening. I would like to put another 500 before I call it good but I think this will be a fine pistol. People love to hate on sig so I take a lot of the issues wit a grain of salt, and it does seem like sig has been good at resolving the problems. Maybe not being forward about problems but they are fixing them. Its my favorite gun to carry, although I nearly always carry a backup ( not because of p365, just a thing I do) and have enough confidence in it at this point to be the one I pull out first. My local gun range put 2k on their gen 1.5 (feb birthday) with no issues before they stopped counting, they did eventually send it in and got new barrel(peening issue from that gen, although they were not really concerned about it) and they installed the new striker. They have since put many more rounds through it without failure.

up
0 votes
down
0 votes
View score
By IDPA-USPSA-Champ, 30 months ago

People love to hate on Sig" you say? For good reason. You can have the best customer service on the planet but if you use it 3 times a year what good is it really? The 938 / 238 which I own 2 of came out with just as many issues and took many years to remedy, the 320 STILL hasn't made all of it's recalls for the drop fire fiasco for the ARMY much less civilians. If other German companies like H&K or Walther had these kinds of issues they'd be exiled and banished. it's fair to say that one of the most expensive guns you can buy has had MORE PROBLEMS than brands at the bottom of the cost list.......which is totally unacceptable. But hey, go buy another 6 pack of Legions! I know Taurus handguns that have a better return to factory rep.

Do you own a p365? Or have personal experience with issues? I know they have had a few quirks that shouldn't have had, but i feel my "3rd gen" is a decent gun. Need more rounds in it but I've only seen issues in the web but know a few with them and haven't had to send back. I'm not ready to call it junk it, but also not gtg either

I drive a 3rd tacoma. People are hating them hard bc past rep, but really are in the normal or better than for issues. I see it as the same. Yes i wish this gun didn't come with possible issues, but I'm not going to say it's worse than a taurus that a lot of people buy and toss in the bedside drawer and never shoot. But i do agree with you. I actually passed up on 320 bc of their issues a few years ago. Ive shot my 938 a lot to make sure its good to go and love it, better than the kimber micro which got less hate for some reason

up
0 votes
down
0 votes
View score
By IDPA-USPSA-Champ, 30 months ago

up
2 votes
down
2 votes
View score
By WingedMelon, 6 days ago

29 months later there has been no ding ding ding. False prophecy, loss of credibility.

It's on this same deals site but sure here you go

WHOOPS that's for the 320 not the 365. My fault there. I'd say that all black plastic pistols look alike but then someone would probably call me a xenophobe or some shiite. Sorry m3 for my mix up.

up
0 votes
down
0 votes
View score
By sheffester, 30 months ago

The local gun shop to me has a rental one with atleast 20k rounds through it with no problems, so I dont know what the problem is

up
1 vote
down
0 votes
View score
By Paper_Shredder, 30 months ago

Do your research thoroughly before buying unless you enjoy paying to be Sig's R & D test dummy. Already into Gen 3 in less than a year and Sig has chosen to issue no recalls on a firearm they are obviously aware has problems.... My bet is within a year or two the numerous problems will be solved and it'll be cheaper and by then other companies will have something better.

up
1 vote
down
1 vote
View score
By fatclay, 30 months ago