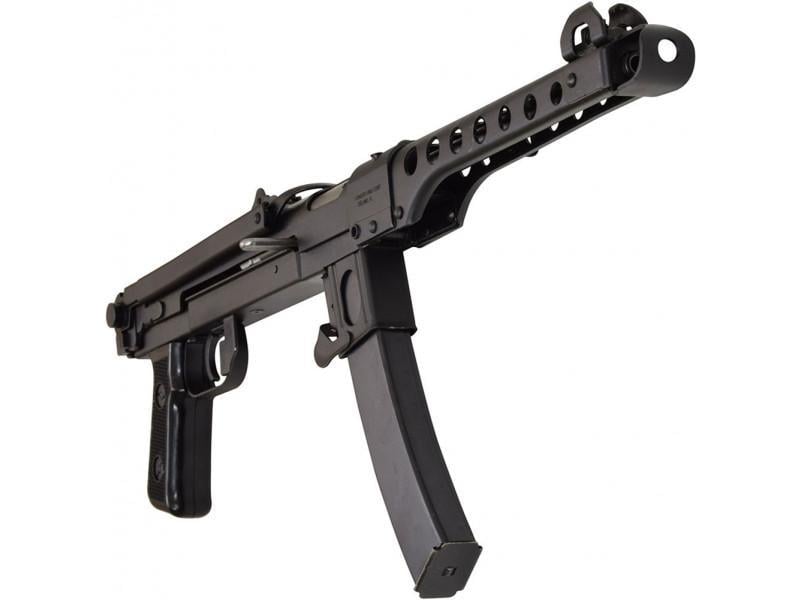 This is one cool cat .

Original Polish PPS-43C in a semi-auto version. 7.62x25 caliber, considered a pistol due to overall length. Comes with two 35 round mags. The PPS-43C (Pistolet-Pulemet Sudaeva, model of 1943 = Sudaev SMG) was born as an answer to the need for a firearm that is more compact and mobile than the PPSh-41, then in use by the Soviet Army. The PPSh-41 was somewhat too long to be used by tank crews and mobile recon groups and paratroopers, so late in 1941, the Red Army issued a request for a new more compact sub machine gun (SMG). The designer Sudaev initially designed his new SMG in 1942, and it was adopted under the designation of PPS-42. The next year he refined the design, and this final model was designated as the PPS-43. This model was manufactured in significant numbers (nearly two million PPS-43 weapons were manufactured between 1943 and 1946). The PPS-43 is sometimes referred to as the best SMG of World War II. After WWII, it was widely exported to pro-Soviet regimes around the world, and widely copied.

Pioneer Arms has redesigned this historic firearm and has reconfigured it to fire from a closed bolt ( Semi-Auto ) position. The safety is located at the front of the trigger guard. The receiver and barrel shroud are made from stamped steel. The rear sight is an L-shaped flip type and is marked for 100 and 200 meters, the front sight is a fixed blade type. The barrel is equipped with a simple muzzle brake. This firearm is an ATF approved pistol. The stock has no function and is permanently fixed in its folded position.

This pistol is manufactured at the famed Radom Plant in Poland by Pioneer Arms. All parts and components are Polish made. The PPS43-C pistol comes with 2 curved box magazine which holds up to 35 rounds each.

Login or register to post comments
By nmcarbine, 4 months ago

Well guys, let me tell you a tale....I am an FFL and a client of mine is in the Army serving in Korea. He is hooked up with a bunch of gun gurus and they spend all their time talking and studying guns. On his last visit, at Christmas he had a VZ2008 come through me that he was going to pick up on holiday. After knowing about that gun, I had to buy one for myself, and I did. It is the best 7.62X39 "milsurp" you can get. Guess what gun is on his wish list now, yes, the PPS43. That led to me wanting one, and buying an M57 to dive into the Tokarev cartridge. To the best of my understanding, it is the only round that defeats the kevlar helmet and level 3 body armor. Ammo is $20/50 that has reloadable brass. Just bought a PPS43 de-milled kit...3 mags, pouch, sling, and most of a full auto PPS43. It has an intact foldable stock to make it an SBR. Sells for $80 with free shipping.

up
0 votes
down
0 votes
View score
By SmokingSteelOrdnance, 4 months ago

Yeah, don't buy from them, they send stuff out with broken and missing parts, fraud!

up
0 votes
down
0 votes
View score
By SwissAlps, 6 months ago

up
2 votes
down
0 votes
View score
By oneijack, 7 months ago

up
0 votes
down
1 vote
View score
By idontneedausername, 8 months ago

Why is the 7.62 version even being made? They have tooling for the 9mm, just make those. 7.62 is a dead caliber, and too expensive for a gun that no one is going to use for anything other than shooting dirt.

up
0 votes
down
0 votes
View score
By pdxmostwanted, 8 months ago

Lol....literally don't even know what to say to this LOL

up
0 votes
down
1 vote
View score
By Thornhulk, 8 months ago

Well the 25 variant isn't very common in the us outside of tokerev fanboys, so I see his point. Especially in something that's basically carbine. A 9mm version of this w/ a brace would appeal to a much larger crowd.

up
1 vote
down
0 votes
View score
By otd, 9 months ago

up
0 votes
down
1 vote
View score
By beachbum69, 9 months ago

So... I want to like this gun but its so unique I know NOTHING... Can someone convince me to buy this gun? Or convince me against.. Help me out boys

up
0 votes
down
0 votes
View score
By DarknessDescends, 9 months ago

It depends on what you want it for. I've wanted one before but then I thought...how hard is it to get 7.62x25, extra mags, extra parts? Then the folding stock is welded to the gun and is in a semi auto configuration (which bums the history side of me). The gun was originally meant to operate from an open bolt design if I'm not mistaken these are closed bolt which I've heard causes issues. If you want one to plink with go for it...but I thought of other ways to spend $400 real quick.