This deal has expired. Browse other ZAVIAR Arms products or click here to get notified when it's back in stock. 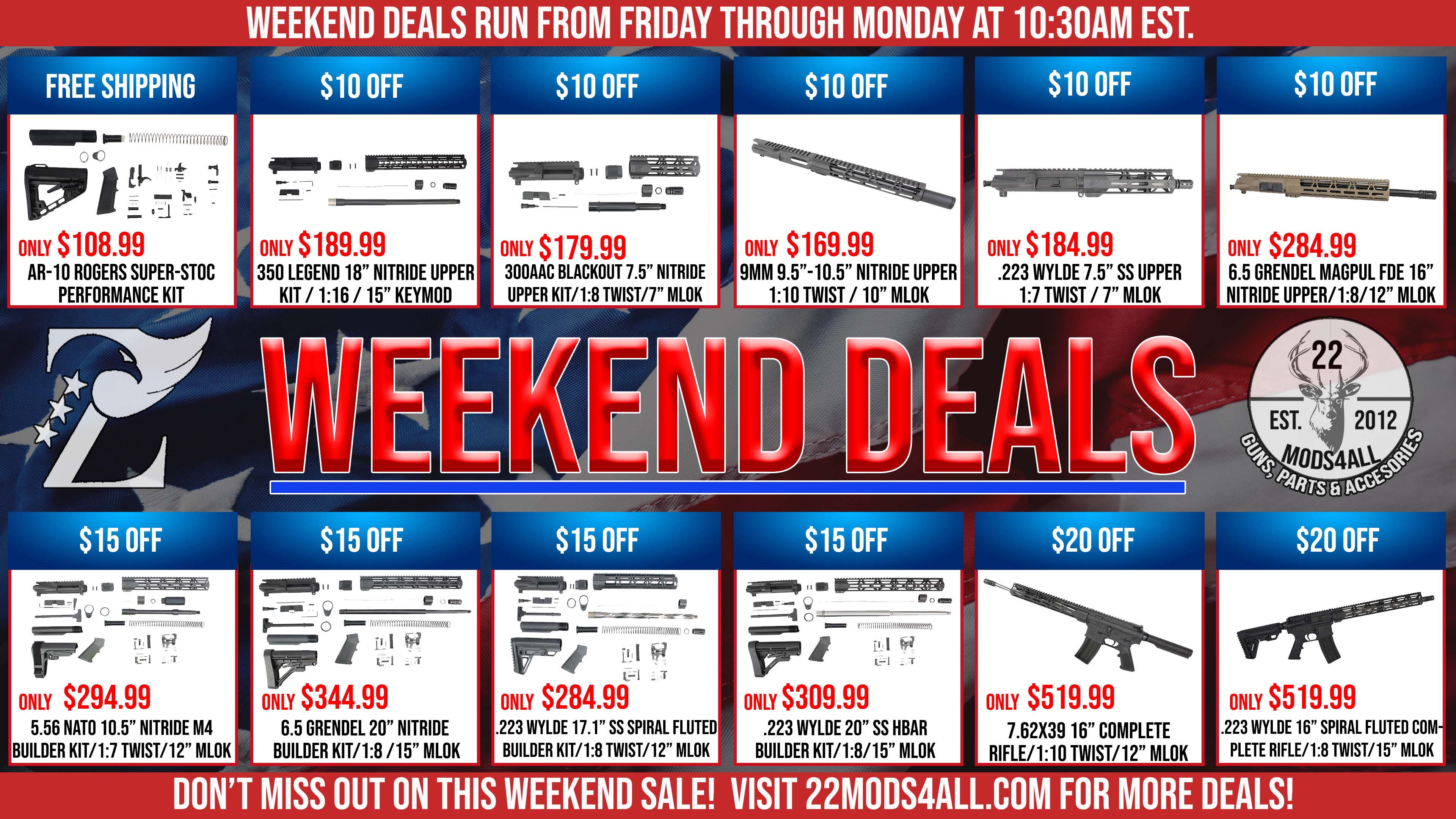 If you missed out on our DAILY DEALS, make sure to check out what we have to offer for the weekend! Our WEEKEND DEAL ends on Monday at 10:30am EST. DON'T MISS OUT on the incredible SAVINGS on our products that we have discounted for you, for the weekend ONLY! 22mods4all has the products you need, at the prices you want!

*Make sure you are subscribed to our newsletter! Get early access and exclusive discounts on sales and products, that only subscribers will see!*

Subscribe today to make sure you are in the loop for a surprise we have in store for our subscribers EVERY MONDAY!

Login or register to post comments
By rs, 5 months ago

So I've watched these deals from 22mods4all for awhile, always seemed like a good deal. I sent a deal to my brother who decided to buy an AR-15 pistol builders kit. When he received the kit 16 days after placing his order, he noticed he had two buffer tubes and springs but was missing the gas tube, block, charging handle. He emailed the company because they wouldn't answer their phone. Finally got a response and they refuse to send him out the parts he is missing until he sends back the extra spring and tube he received. So now he has to wait another week for them to receive the parts back and then probably an additional two weeks to get the parts he was supposed to receive in the beginning. When he asked about just returning it all since he did not get what he ordered they were going to charge him a 6% restocking fee. That is not the way it should work. Send the stuff that was ordered first, then get your extra crap back.

up
0 votes
down
0 votes
View score
By jcronk23, 6 months ago

Less than 500 rounds into a pistol upper I got from them, and it’s short stroking on every round. My psa upper has zero issues with same lower. Swapped bcg with the psa and it still does it. I’m betting it’s the gas tube or block....I’ll have to dig deeper into the problem this spring. Just another reason ak>ar

There are no products listed under this category.

up
0 votes
down
0 votes
View score
By Oonothin, 10 months ago

I just want to say as a repeat customer who has bought everything from complete uppers to parts kit, etc, that this company is outstanding in my experience. Always quick shipping and handled a small issue I had with great customer service. The complete upper i bought in 7.62x39 has been.perfect since round 1. I have about 2000 rounds no issues.

up
3 votes
down
0 votes
View score
By hossmonkey, 12 months ago

But was your charging handle out of spec by .006? You must be an employee, only employees have positive remarks about 22mods4all! See you at work tomorrow on my multi day commute from Vancouver, WA. to Longwood, FL. Did I mention I shaved 1hr off my 45hr 3,045 mile commute! Sorry, couldn't resist a jab at Analtightace for insinuating I work for 22mods4all.

Bought a few uppers and misc parts from this company. In fact just after they started I believe. I have had no issues, short or long term with any of the products I've bought from them. All my questions have been answered promptly and professionally. Don't be afraid to buy!

up
0 votes
down
2 votes
View score
By lolyourdumb, 14 months ago

up
1 vote
down
0 votes
View score
By Greenscapes, 15 months ago

We do offer 6.5 Grendel and 224 Valkyrie. If you take a look on the left side menu on our front page you can search those calibers.