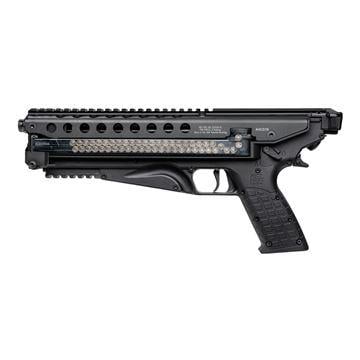 ADAPTABLE
Picatinny-style rails and QD mounts offer plenty of real estate for accessories to meet the needs of the job at hand.

DYNAMIC
The 5.7 cartridge comes in several variants from sporting to hunting to serious personal defense. Protective details around the world utilize its efficiency while sport shooters and hunters love the cartridge for its accuracy and distance capabilities.

FIREPOWER
We would be remiss if we didn’t mention the firepower this pistol offers. The P50 platform is based around a 50 round, double stack magazine which lays horizontally along the top of the grip.

Login or register to post comments
By Navy_Veteran, 1 day ago

Wow - only $105 OVER MSRP? That’s pretty amazing for K-Var!!! All cool Kel-Tec products seem to fetch over MSRP when they first show up but will hopefully settle down in price when the availability gets better.

Hopefully more of you guys getting into 5.7x28 will help the ammunition situation with more manufactures going in the game. I shoot mine very seldom due to the cost vs just about every other caliber. I don’t reload this round and heard many people crush the casings because they’re tricky so never tried it.

I’m glad Kel-Tec stuck to the tried and true FN / AR Five Seven magazine do you can get 50 rounds vs the other recent offerings with smaller pistol mags. The only thing I’d like to see is a brace for the P50 and I’ll stick to my PS90’s and AR Five Sevens until then.

up
0 votes
down
0 votes
View score
By Repented0ne, 1 hour ago

Did you do Magsaysay Drive Navy Vet ?

About time, but already got mine!

up
1 vote
down
0 votes
View score
By tvia, 2 weeks ago

Beautiful gun. Ammo is challenge for those not prepared. Going to SBR?