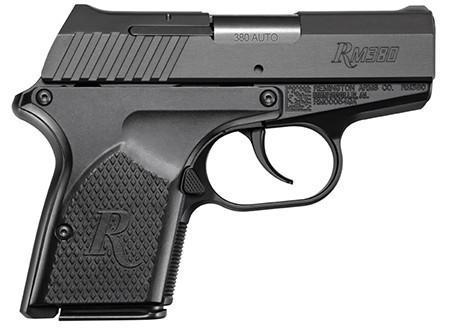 Every feature of the RM380 has been fine-tuned to deliver unfailing function with unrivaled accuracy and control in the most extreme conditions on earth. The RM380 features all metal construction with front strap checkering, undercut trigger guard, ambidextrous mag release, fully functional slide stop, smooth DOA trigger, removable/replaceable grip panels, and rugged no-snag fixed sights. It is the most complete fusion of confidence and concealment for Every Day Carry. This model has a black oxide anodized aluminum frame, black grip panels, and a black steel slide. It ships with one flush fit magazine and one extended magazine.

Login or register to post comments
By DpSyChO, 31 months ago

Ordered a pistol from FWT late Nov 2017, showed to be in stock. Delivered to my local gun shop 5 weeks later (which was after several calls and emails). Gun that I received was incorrect (ordered stainless slide version and they sent black). Offered me a $5 coupon for store credit if I wanted to keep it even though there was $15 dollar difference between the two, the black slide version was cheaper. They did not offer me a refund of $15 which I may have taken, said the coupon was all that she was authorized to do . I told them I would rather have the correct version if I'm paying same price, the lady said OK and they emailed my FFL a return label. Three weeks after tracking number showed the incorrect pistol to have delivered back to them they still had not shipped out the correct pistol, they would not give me definite ship date, just that it should ship any day. In my view they screwed up the order, the replacement should have shipped out the same or next day that they received the incorrect that was shipped back. I called my CC company and had them do a charge back The total time involved messing with Four Winds Technology was around 10 weeks from when I placed order till I done the charge back. I would not order from them again. In the end I was not out of any money but was out lots of time from emailing and calling and they had two and a half months FREE use of my money. Four Winds Technology owner is JAMES PELLETTE, home phone is (716) 592-8084. His wife is Elizabeth and runs photography service out of the home so if you get frustrated enough with your order that you cannot get answers from calling FWT, call his home like I had to, if they answer as "Elizabeth Pellette Photography" that is the correct number. Some things in life you have to learn the hard way and I learned that I should have taken into account the other bad experiences of FWT customers when trying to save a few dollars, even if they had delivered the correct pistol when they shipped the incorrect one it would not have been worth the hassle and 5 weeks I spent waiting. In short the worst experience I've had with an online retailer.

up
0 votes
down
0 votes
View score
By Demcpita, 38 months ago

up
0 votes
down
0 votes
View score
By HippieGuns, 38 months ago

Yes they're open. I just called them and placed an order. They had a website issue this AM. Good to go

up
0 votes
down
0 votes
View score
By BATTERY, 38 months ago

I bought a gun from them with zero problems.

up
0 votes
down
0 votes
View score
By BarackHussein, 38 months ago

Their phone number is a magic jack. I ordered a gun from these guys. After two weeks of waiting And excuses i finally did a chargeback on my CC. Immediately after this my order shipped.

Go check out Reddit, see what other people experience with them it's not good.

up
2 votes
down
0 votes
View score
By HippieGuns, 38 months ago

I've ordered from them many times without issues.

You are clearly the owner of FWTGUNS and a liar. You open a new account on here because you were banned. You post new deals on here then you try to make people believe that doing business with you is a good thing.

Sorry, not buying your lies.