This deal has expired. Check Estate SS12H4PK 8 inventory at other vendors or click here to get notified when it's back in stock. 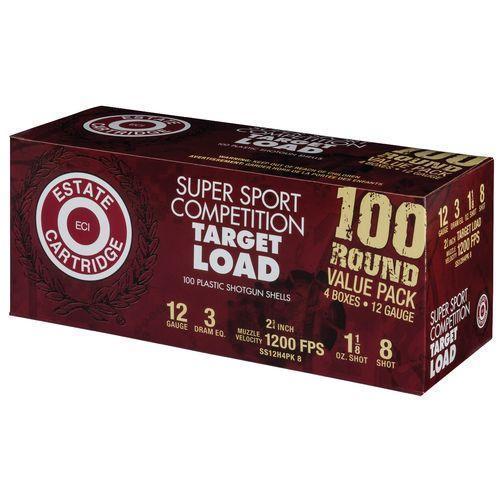 Online Only, Do Not Call - To enter coupon code go to cart and click the circled plus sign under the zip code box -

Head for the next competitive shooting event stocked up on the Estate Cartridge Super Sport Competition Target Load 12 Gauge Shotshells. These extra-hard steel loads measure 2-3/4" long and travel at speeds of up to 1,200 fps. 25-round box.

Login or register to post comments
By Surculus, 35 months ago

Price & picture would seem to indicate they're 100rd party packs, not the 25rd boxes as described in Academy's product info. [I would imagine 4x25rd boxes per pkg. at this price.] Great price, too bad that Academy refuses to ship ammo behind the Granola Curtain while it's still legal to do so, instead of just excluding those municipalities that regulate it like most other online sellers do. Guess that's beyond Academy's capability? [sigh]

up
0 votes
down
0 votes
View score
By JoeSixpack, 35 months ago

up
0 votes
down
0 votes
View score
By JoeSixpack, 36 months ago