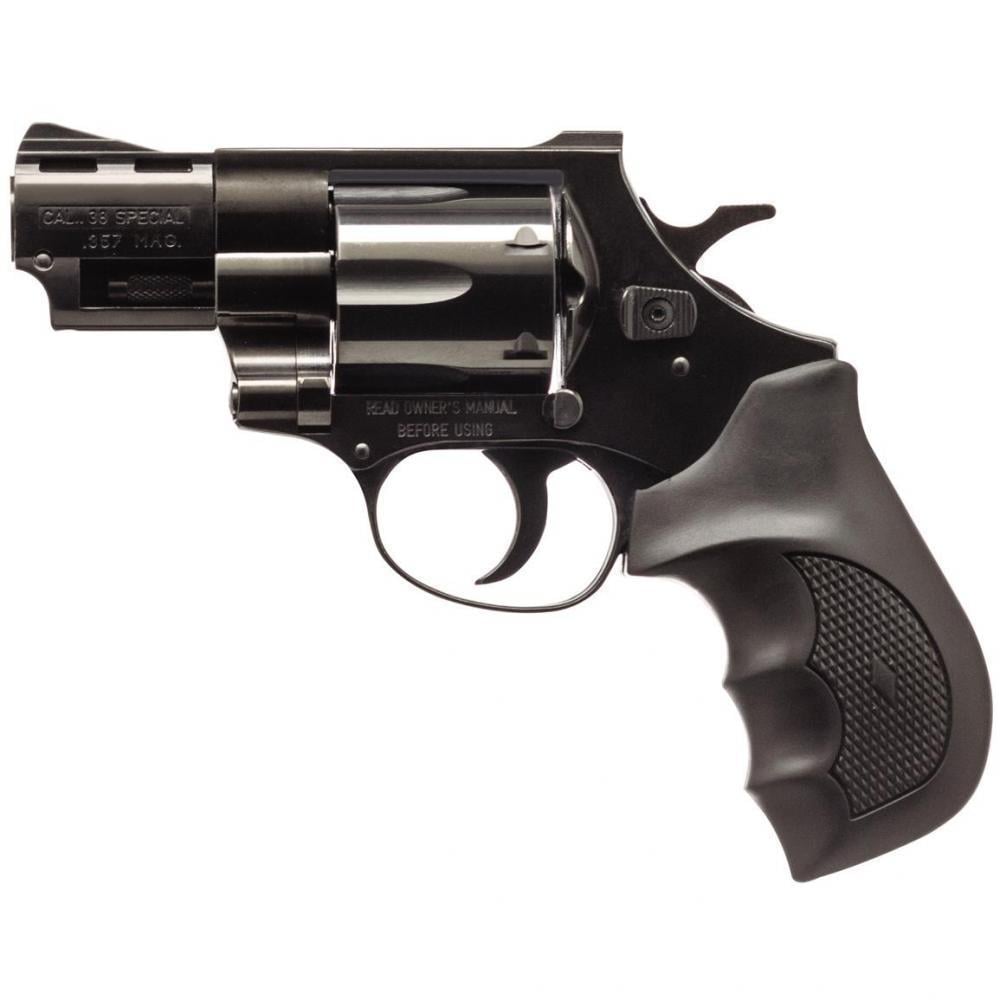 If I bought this snubby I certainly would crown and polish the barrel tip. It wouldnt change any ballistic characteristics... 2" barrel has no ballistics anyhow... lol. No but a serious crown job would suit these well.

up
1 vote
down
0 votes
View score
By PugsandGuns, 66 months ago

If I'm not mistaken, weihrauch makes some really top of the line air rifles. I wonder why their real guns aren't on the same level?

I had a 4" blued model a couple of years ago. It was my first revolver and I was on a restricted budget. I took it to the range several times and it never failed to go bang. After I saved up enough to get a Ruger, I sold it off, but only because I wanted those funds to get another pistol. Here are a few things I remember about my particular gun:

1. My EAA had vertical grooved in the trigger that tended to get uncomfortable on my trigger finger if I fired a lot of rounds, or dry fired in an effort to smooth out the trigger. A little dremel action probably would have helped in this regard.
2. I hated the grips. While they filled my hand ok, they were tended to bite a little when shooting hot magnum loads. I tried searching many places, but could not find any aftermarket grips for this gun. I did find a forum where someone mentioned they had used a Hogue grip for a Taurus Tracker. So, I bought one from Amazon. When I got it, the screw hole in the bottom of the Hogue grip did not line up with the frame. However, drilling a new hole in the bottom of the grip with a dremel lined it up enough so that I could secure the grip on properly. It wasn't very pretty, looking at it from the bottom of the grip, but it made a world of difference when shooting it at the range.

up
2 votes
down
0 votes
View score
By TheAnonymousShooter, 70 months ago

If I want no thrills cheap .would a rossi snubbie be a better buy?

up
1 vote
down
0 votes
View score
By speedtuff, 63 months ago

Had both sold the Rossi and bought 4 more Windicators, they shoot so much better, and have never failed me. I keep one of these as a backup and in my trucks and also is my EDC in the summer.

up
1 vote
down
0 votes
View score
By TheAnonymousShooter, 70 months ago

For the money is this a good buy?

up
0 votes
down
0 votes
View score
By FreeInAZ, 70 months ago

As noted below - the 4" versions of this pistol maybe fine. However the snubs I have seen locally (2 different shops have one each), look like some lacky took a pipe cotter and lopped off the barrels! The shop closest to me that has one has been trying to off load it for over 2+ years. If that tells you anything?

This is because they are imported as 4" and are cut down to 2" domestically. That said you'll be hard-pressed to find a bad review of the gun. Impact, buds, and grabagun allow for reviews and they are overwhelmingly good. Also there's a youtube user named "mousegunner" who did a three-part review of the gun as well. The gun seems to be an amazingly value in either barrel length.

up
2 votes
down
0 votes
View score
By TheAnonymousShooter, 70 months ago

Will buy this gun as a result of your comment. For the money it's a no brainer . but 5 boxes of ammo and you have spent more than on the gun.

By all accounts the thing is an ultra no-frills / ultra reliable slab of metal. If you like snubs you might dig it. Be careful of the edges of the 2". They may be sharp and could benefit from a dremel. Also they have a lifetime warranty though the customer pays shipping both ways.

up
0 votes
down
0 votes
View score
By TheAnonymousShooter, 70 months ago

I don't need a fancy gun. All it has to do is go bang. And for the price I can dremel the crap out of it. No big loss money wise either way. Never had a snubbie will be my first. Have a s&w 686 in 6 inch. Love it.

Well as you know this gun is waaaaaaaay lighter than your 686, beware with .357 rounds! Also, it's available in a nickel finish too.

What's the word on these? Looks nice.

I got the 4 inch model last week. Still haven't gotten around to the range yet. It is very heavy and solid feeling. The 2" models are shipped into the US with 4" barrels and they cut them down so the crown is rough and not blued.