This deal is out of stock. Check Colt GDC0000002323 inventory at other vendors or click here to get notified when it's back in stock. 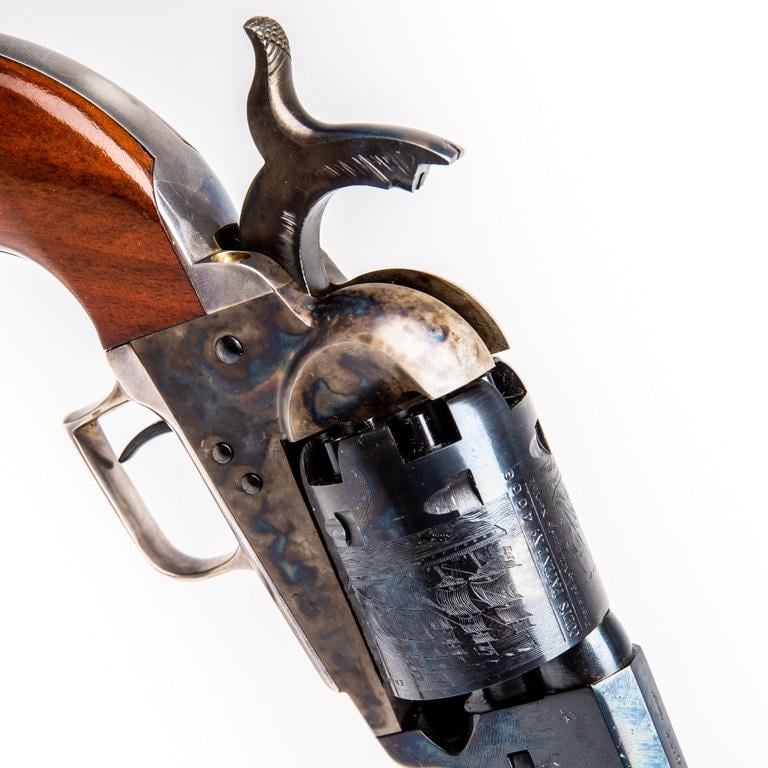 Posted by weezer78
Updated by michaelw 4 months ago
More deals from Guns.com
3540 views
out of stock

The Colt 1851 Navy is a cap and ball revolver produced from 1850 to 1873. This single-action six-shooter is most commonly chambered in 36 caliber, also known as Naval Caliber. Colt also produced a small number of Navy revolvers in 34 caliber, while just five models were produced in 40 caliber for testing by the U.S. Navy Bureau of Ordnance. With a size suitable for carrying in a belt holster, the 1851 Navy became popular among American military and civilians alike and also used by military forces across Europe, Asia, and Africa.

SELLER DESCRIPTION
This Colt 1851 Navy Ulysses S Grant Commemorative is a six-shot black powder percussion revolver chambered for 36 caliber rounds. A 7.5-inch barrel is adorned with a notch rear sight and a blade front sight. The barrel and cylinder are blued steel, and the cylinder features some engraving. The frame, hammer, and the rest of the metal components of this special 1851 Navy is case hardened. Smooth walnut grips add an extra touch of class to this revolver. The display box comes loaded with tons of accessories, including a powder flask, bullet mold, and others. The key to the display box is missing from this package.

Login or register to post comments
By Ghost_Gunner, 5 months ago

up
0 votes
down
0 votes
View score
By Crom, 6 months ago

The Colt 1851 Navy .36 was reportedly Grant's sidearm of choice, but he rarely actually wore it or even a sword according to most accounts. I've also seen photos of an engraved 1860 Army that was reportedly his, but likely never carried, and probably a gift to him at some point. I've also seen a photo of Grant and his horse Cincinnati and there is a HUGE saddle holster for a pistol larger than either an 1851 or 1860. Maybe that was for the Dragoon you mentioned.

Not a bad price for this gun considering it's condition, that it's an actual Colt (made around 1971 I believe) and has the case, powder flask, mold and such. The scratches on the hammer are hard to look at, meaning the hammer isn't perfectly fitted and the gun may need some gentle stoning or file work on the frame to smooth out the burr that is causing it. My GoogleFu found a few similar guns for similar money, some in a bit better condition, so you may want to look around if you are a true Ulysses S. Grant fan.

Personally, I'd rather spend around $240 for a replica from Cabela's or Bud's and actually shoot it. But, thumbs up for a beautiful BP revolver post, and you can get it shipped straight to you without any FFL fees in most states.

up
1 vote
down
0 votes
View score
By Surculus, 6 months ago

Why is this even a thing? Ulysses S. Grant was a Union *ARMY* general, if anything he would have carried an 1860 Army or had a Dragoon strapped to his horse!

Are you saying that nobody in the navy carried army guns or vice versa? You don't know much about history if you think that.