This deal has expired. Check Caldwell 397488 inventory at other vendors or click here to get notified when it's back in stock. 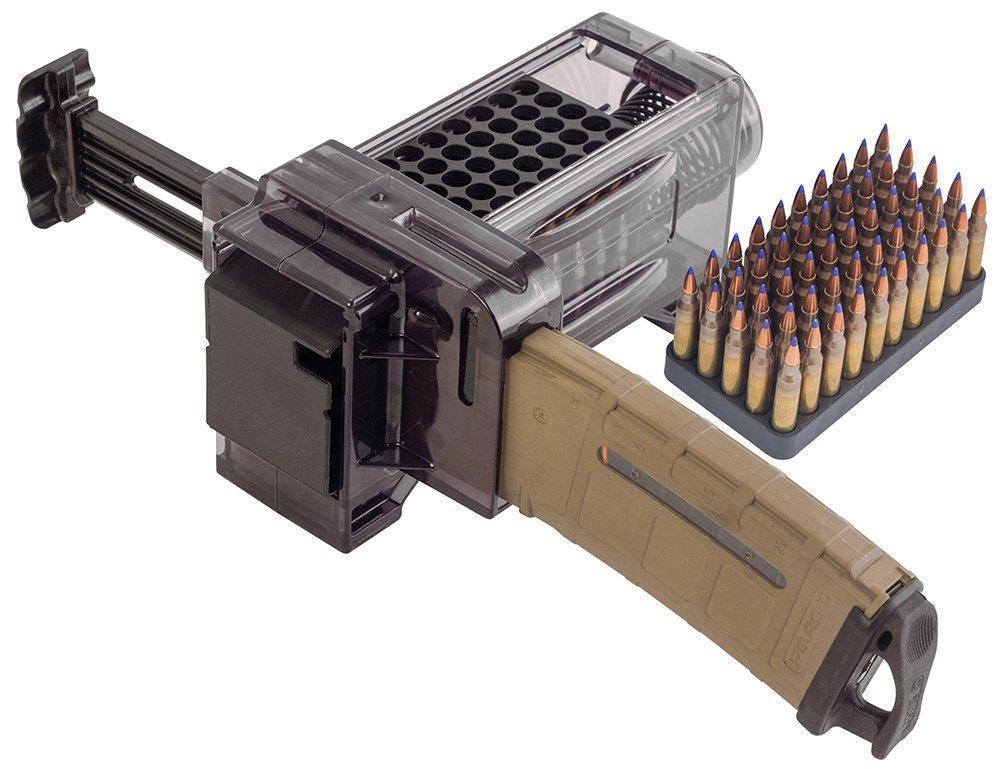 Online Only, Do Not Call, one coupon per order. Cabela's Gift Cards at 15% off. Get $5 in Gift Cards bonus via this link

Load your AR magazines in seconds with the Caldwell AR-15 Mag Charger. Designed to accept 50 rounds of .223, 5.56 or .204 from any common 50-round ammo manufacturer box or from aftermarket 50-round plastic storage boxes. Simply align bullet tips and dump ammo into the Mag Charger, which is automatically arranged without touching a round. Once filled, insert any AR magazine into the Mag Charger as you would into a rifle. Stoke the plunger back and forth, loading five rounds per stroke as the spring-loaded ammo carrier advances to the next five rounds until magazine is fully loaded. The entire process of filling the Mag Charger and loading all 50 rounds into two magazines takes less than 15 seconds. Ammo Transfer Tray is included to invert ammo that is positioned in ammo boxes with the bullet tips oriented down or to stage bulk ammo for dumping into Mag Charger. Imported.
Item number#: IK-231749
SKU#: 397488 ($39.99)
UPC#: 661120974888 ($39.99)

Login or register to post comments
By TheGeekFreek, 14 months ago

I bought one of these for over $50 last year.. At $23 I guess Im christmas shopping early..

up
0 votes
down
0 votes
View score
By TNtee, 14 months ago

This was on sale through an unknown to me company about 6mo ago for $20 shipped.

Bogus Deal! It was "Dunn's Sporting Goods". I ordered this for $20 and they charged my credit card and then a week later said they were out of stock. Took another week to get my refund.

up
0 votes
down
0 votes
View score
By SacCityZ, 14 months ago

Same thing happened to me and then about a month later someone from Dunn’s called me to apologize and see if I still wanted it since they got it back in stock. Ended up getting it for the $20 shipped price.

up
1 vote
down
0 votes
View score
By Jcorp, 13 months ago

up
0 votes
down
0 votes
View score
By oldfashion, 39 months ago

It works well just remember you have to load the ammo box then use that to load the Mag Charger. If you reload your own ammunition then you will be loading the ammo box anyway. If you buy bulk might as well just get a Butler Creek Lula Loader. They are fantastic for loading AR magazines. I have all the AR Magazines, including this one, except the bench loader and the Butler Creek Lula Loader is my favorite for bulk ammunition.

up
0 votes
down
0 votes
View score
By JoeSixpack, 38 months ago

Im in the market for a loader.. and I've looked at this one and the striplula.

The striplula looks like it would be easier to travel with and nearly as fast and also about half the cost..

which one would you recommend? if you have a strip lula do you really need this loader?

up
0 votes
down
0 votes
View score
By oldfashion, 38 months ago

You only need one or the other but the Cadwell will be quite a bit larger. I bought them all just to see which I liked the best. Like I said I would give a slight edge to the M-16 / AR-15 LULA. as it can load and unload a magazine. If space is a issue the Striplula would be the way to go. it is longer then the M-16 / AR-15 LULA.but not as fat.

If you would like to see a side by side comparison for size I could probably dig them out and send some pictures but like I said the Caldwell is very big compared to the Maglula's. plus you have to carry extra ammunition storage boxes which would also increase the size of what you would be carrying. And the Caldwell would not hold up to crushing or any type of abuse as it's made from plastic and the Maglula's are polymers.