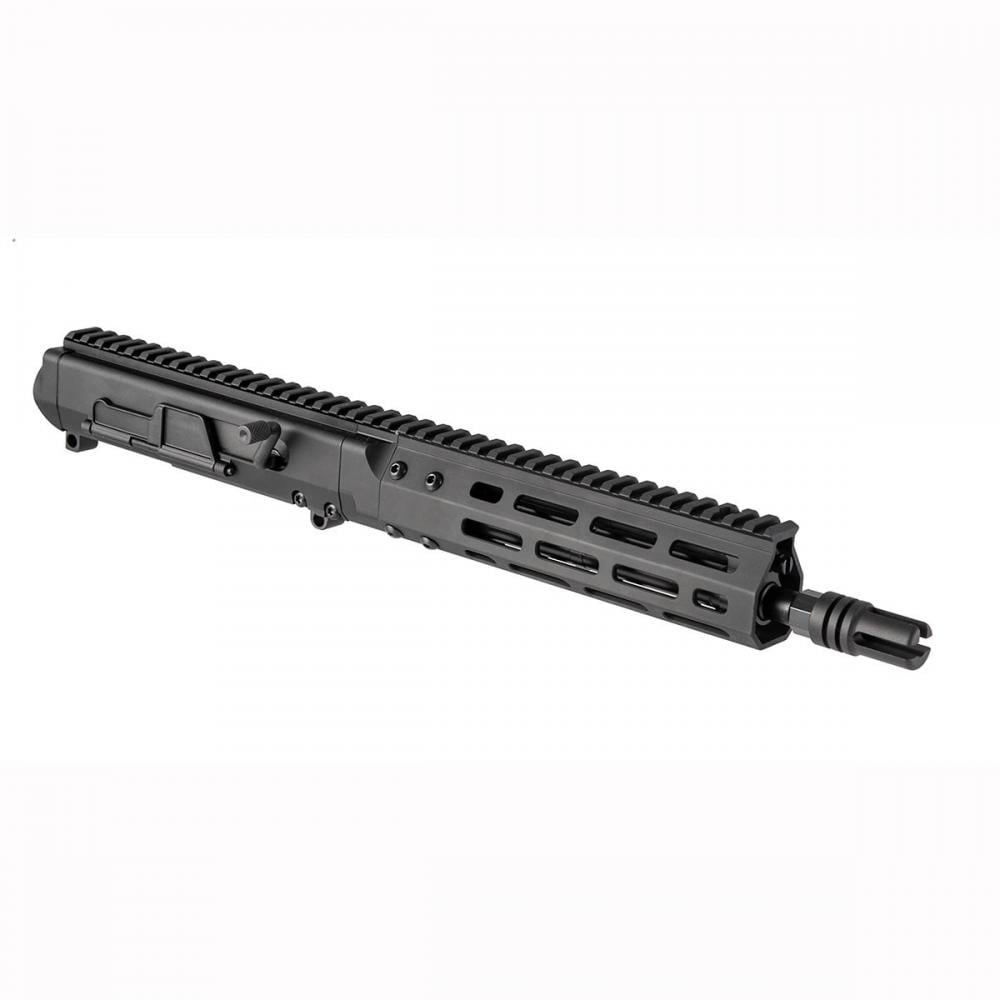 Specs
Designed in conjunction with PWS & FM Products, the Brownells BRN-180S™ Complete Upper Receiver is the newest iteration of the BRN-180™ Upper Receiver, which was inspired by the Armalite® AR-180 of the 1960s. The BRN-180S™ shares a large chunk of components with the BRN-180™ but introduces key features to improve reliability and usability in a short configuration.

The BRN-180S™ is obviously shorter than the standard BRN-180™. The 223 Wylde version comes with a 10.5” barrel configuration. The free float M-LOK handguard mated to the assembly is also shorter, terminating just in front the gas block. This resulting shorter system also required a cutout in the handguard to access the two-position adjustment. The user can select between these two settings to find the most reliable configuration with their ammo and suppressor.

The BRN-180™ Gen2 Upper Receiver Group improves upon the original BRN-180™ with two main upgrades. First, all BRN-180™ Upper Receivers now ship with an Adjustable Gas System, previously only found on the BRN-180S™. The operating mechanism, the short stroke gas piston concept remains the same, but the user can select between two settings, depending on their conditions and ammunition, to ensure smooth and consistent function. No more spare gas piston cup to worry about. In addition to the new Adjustable Gas System, the Handguard is now retaining with a single locking screw. This large screw provides ample locking force and ensures a more consistent handguard lockup than the previous mechanism. During extended firing, and the barrel heating up, this new locking system ensures the handguard retains alignment and rigidity with the upper receiver. Also, with this new takedown mechanism, the handguard can be removed to access the gas system without removing the internal components.

The barrel is machined from extra-strong 4150 carbon steel, with a hard Nitride finish that really resists surface wear. The 223 Wylde BRN-180™ chamber allows for extra flexibility in ammo choice - with 1-8" rifling, so it handles both .223 Remington and military-type 5.56mm NATO ammo with equal aplomb. Up front there's a replica of the AR-180's unusual three-prong flash hider: the hemispherical bottom prong helps prevent the muzzle blast from kicking up a dust signature when shooting prone. Standard ½-28 tpi on the 223 Wylde muzzle threads let you swap on a modern AR-15 muzzle device should you be bitten by the customizing bug.

Login or register to post comments
By BangCreosote, 3 weeks ago

up
0 votes
down
0 votes
View score
By CHIGGER, 3 weeks ago

up
0 votes
down
0 votes
View score
By Rockstar, 3 weeks ago

She may not look like much, but she's got it where it counts.

That may be true, but if I can pay that same price for BRO or BCM I'll take those and how sweet they look over this

up
0 votes
down
0 votes
View score
By greencondor, 1 week ago

Not to bash you cteeder24, but I think you might be missing the point of this upper. It's not an AR-15 upper, meaning it does not have a BCG that needs to go into a buffer tube. This is an AR-18 clone, which does not have a BCG that require a buffer tube. The advantage is that you can make an AR-18 pistol/rifle with a folding stock (that can repeatedly fire while closed) and/or a substantially shorter OAL. As far as I know, Brownells is the only company making AR-18 uppers, but I could be mistaken.

It's not better than a BCM upper, it's just different.