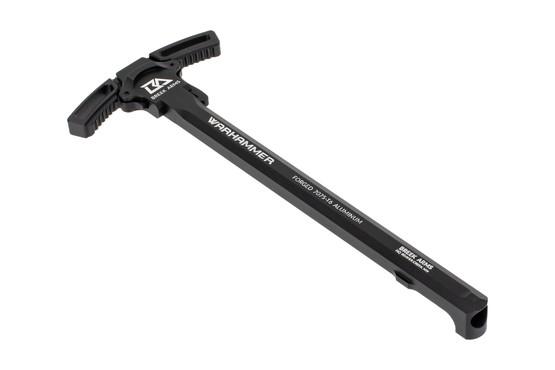 The Warhammer Ambidextrous AR-15 charging handle is made in collaboration between Breek Arms and Foxtrot Mike Products. The Warhammer charging handle features large ambidextrous latches that make charging your AR fast an easy whether you are wearing gloves or using the palm of your hand. This AR-15 ambidextrous charging handle is fully constructed from 7075-T6 aluminum and hardcoat anodized black for long term durability. When running your charging handle one handed, it can cause it to twist creating a weak point and the heavy duty 7075-T6 aluminum ensures it won’t break. The gas shield helps to seal off the rear of your receiver and prevent excess gas from escaping. Upgrade from Mil-Spec today with the Warhammer charging handle.
Features:
- Made in collaboration between Breek Arms and FM Products
- Forged 7075-T6 aluminum construction
- Large textured latches
- Black hardcoat anodized
- Gas shield
- Weight: .98 oz.
Back
Specifications
Ambidextrous: Ambidextrous
Brand: Breek Arms
Latch Size: Large Latch
Material: Aluminum - 7075-T6
Platform: AR-15
Weight: .98 oz.
MPN#: WARHAMMER

Login or register to post comments
By Fatboy1111, 4 months ago

Purchased on their actual site, $38 no shipping, no tax! Out the door.

I've had Radian Raptors on 3 other rifles and they've been my go to so I gave this a shot based on availability.
The Raptor is better at one sided charging. If you try charging by just pulling on the left or the right the Warhammer doesn't stay straight and true as the Raptor - it just feels like it wants to drift. The Raptor's teeth on the inside of the charging handle are there but not noticeable, whereas the Warhammer has REALLY aggressive serrations. Based on the names you would have thought the Raptor would have the teeth you'd remember but it's the other way around. Those Warhammer serrations are probably good if you're going to be using it in colder temps with gloves. If you're not wearing gloves, let's just say you're never going to slip off the charging handle and you'll be aware of them everytime you pull back on charging handle, especially if you're just pulling on one side.

up
0 votes
down
0 votes
View score
By Snipe1guy, 4 months ago

There is a new warhammer mod 2 that just came out , similar design but advertised as better for shooting suppressed and for blowback guns

up
1 vote
down
0 votes
View score
By Strozzi, 4 months ago

up
1 vote
down
0 votes
View score
By dmaic, 4 months ago

Great for rifles with mid-to-high powered scopes on them, sticks out a bit far (catches on stuff) on pistol builds though, ime. Nice CH though, love mine.

Better off buying direct and saving 15% by subscribing to the newsletter. Also free shipping.

up
2 votes
down
0 votes
View score
By joenuclear, 4 months ago

up
0 votes
down
0 votes
View score
By NorthBayVallejo, 7 months ago