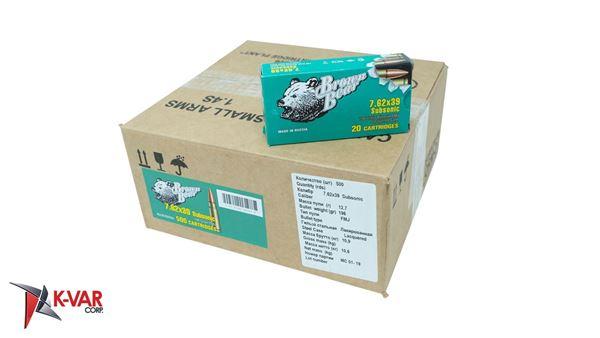 The reason Brown Bear’s Subsonic ammunition outperforms the competition is twofold. First, the ammunition is not just another "off the assembly line" offering. Instead, it is the result of over two years of collaboration between the ballisticians at the Barnaul factory and testing and feedback from experts in the United States.

Second, the Subsonic 7.62x39 ammunition is manufactured to exacting standards normally reserved for military-specification ammunition by the Barnaul factory in Russia. And let’s face it, factory loads top remanufactured offerings—except when it comes to price. However, due to quantity of ammunition being imported, Brown Bear’s new subsonic ammunition is available at prices that beat even the lowest remanufactured competition!

Brown Bear’s 7.62x39 Subsonic ammunition is constructed with a proprietary powder blend, topped with a 196-grain full metal jacket (FMJ) bullet. The performance is nothing short of exceptional.