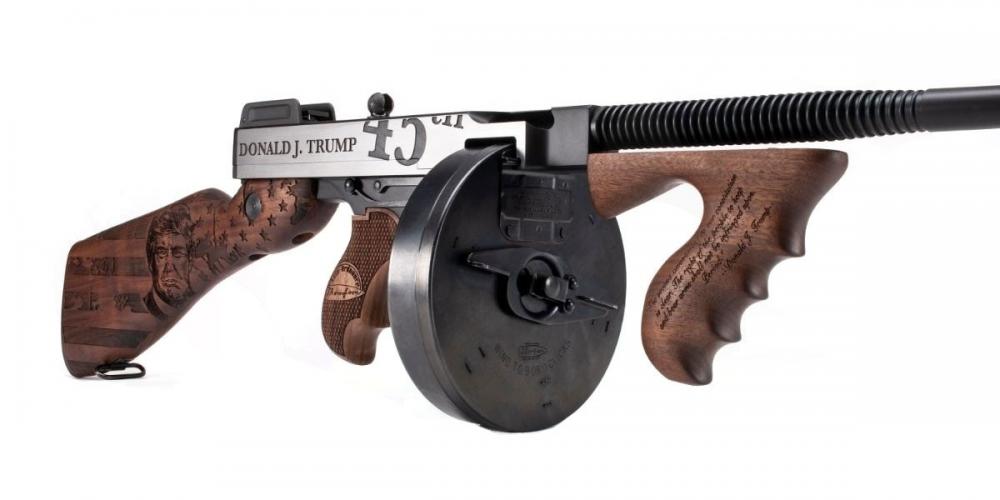 SKU: 5165491593
UPC: 602686422116
MFR#: T1-14-50DC1
- Caliber: .45 ACP
- Barrel Length: 16.5"
- Rate of Twist: 1:16 RH
- Overall Length: 39"
- Weight: 12.5 lbs
- Front Sight: Pinned Front Blade
- Rear Sight: Open Adjustable
- Stock: Engraved Walnut
The "Trump Thompson" starts as a Model 1927 Tommy Gun, chambered in .45 ACP. It is entirely manufactured in the USA from quality steel and American walnut. On the right side is engraved an American flag, and the image of our 45th President. His name and 45th are engraved on the receiver. The grip contains his famous quote drawing the line at infringing on Americans' rights. On the right stock are engraved the Presidential Seal, American Flag, and the White House. The grip contains another important quote from President Trump defining the Second Amendment as America's "first freedom". The receiver contains President Trump's promise to "Make America Great Again". The finish is highly durable Cerakote in Armor Black, and Cerakote Clear over high polished flats.

Login or register to post comments
By ItWasntMe, 3 months ago

Felony Tax, After those dumb ass comments I know you never seen / been to one of his rallies talking about defending the Constitution & Second with 45 thousand plus in attendance and prob. Most are gun owners / defenders of the Second Amendment , and you must be one of those fake news / big tech bull shit viewers. Supporting what red flag laws and just to (name a few ) “”please name them, when, where, when we’re then enacted and where documented that * he * enacted/supported & passed laws on — “ On the bump stocks, yes banned, but please explain —why banned, who was involved in that law - ?? China Jo passed the assault weapons ban of 94' where he literally took everyone’s right to buy or own any assault weapon made after 94' - Trump did/done more protecting the Second & Constitution then any president in our modern day, if you love / cherish the Constitution & Second your going to be begging for Trump to run in 4 years, and this time it won’t be a fraud stolen election - wait and see what this Administration is going to do to the Constitution and Second, just wait until they stack the Supreme Court with “ their “ judges, they started infringing and your not going to be a happy camper when their done with ya- I am not part of this new commie “cancel culture” Felony so hand shake and I agree to disagree - good luck. Ps Where’s Hunter lol lol.

up
1 vote
down
0 votes
View score
By ItWasntMe, 4 months ago

FELONY sounds like he fell off his tricycle and bumped his bean. You tell him to wake up maybe you should and look up “Gun Control Mega Bill HR127 “ Try to blame Trump for this one.

up
1 vote
down
1 vote
View score
By FELONY_TAX_EVASION, 3 months ago

I’m not blaming trump for HR127, although I am saying that he was utterly useless for the 2a, supporting red flag laws, banning bump stocks, just to name a few

up
0 votes
down
0 votes
View score
By KeithDurkee, 5 months ago

I’m a Long Distance Truck Driver and I Am Back out on the road Thanks to Trump over turning the rule that says Diabetics cand drive truck!! Since then I am able to provide for my family and get back to doing the job I love the most! This would be a Trophy Gun to hang over my mantle for years to come with Pride!

It amazes me on here how many supposed "Gun folks" who should be supporting our second amendment rights, sit here and bash on Trump, wanting him gone and letting a gun grabbing liberal into the white house. Not too mention the biggest gun grabber of all to be seen, Kamila Harris.
Why the hell would gun people vote in a group of politicians that want to take our guns and are so dumb the refer to semi auto rifles as "assault rifles"? help me understand the thought process and reasoning? I honestly and respectfully want to know. I voted Trump first time and this time. Am I a 100% complete supporter of everything he did? no, he does alot of things that make me shake my head BUT my constitutional rights are my priority and I would never vote in a liberal, hell bent on taking our guns, silencing our speech and turning us all into a goverment teat sucking country of sheep.
So anyone willing to respectfully share their reasons and thoughts for voting in liberals, Im all ears RESPECTFULLY.

up
2 votes
down
1 vote
View score
By FELONY_TAX_EVASION, 4 months ago

If you actually think trump cares about the 2a you really need to wake up, also, just because someone criticizes Trump does not mean they like the other politician, politics are not just red and blue

up
0 votes
down
0 votes
View score
By FoulPet, 6 months ago

In today's market you can pay for laser etching and design it yourself. Would be cheaper, probably look better and be one of a kind.

up
1 vote
down
0 votes
View score
By FELONY_TAX_EVASION, 6 months ago

sorry, this will end up being yard sale deal if it go under $300 eventually. Who's going to pay that much for this. All ammo is up 300%, seen this before.

Joke, this was made pre-election, hoping like most of gun owners, we got this one..... now this is yard sale deal....

up
1 vote
down
0 votes
View score
By jdspeedfreak, 8 months ago

up
3 votes
down
3 votes
View score
By KandyTeeff, 8 months ago

Hey, let's make the Thompson somehow look ugly and charge double the price - Whoever made this firearm

up
2 votes
down
0 votes
View score
By TYPresTRUMP, 13 months ago

Slow, You say * Take the guns first, go through due process second * if this comment was pointed to Pres. Trump I’ll ask again since you haven’t answered yet “”To whom and when were guns taken with out due process”” by Pres.Trump ? Are you confused and might be talking about the Democrat Mayor Ray Nagin from Louisiana who had firearms illegally confiscated from law abiding citizens during Katrina and convicted of crimes in 2014 ? I can hear the crickets now (SILENCE ) 8-))

up
0 votes
down
9 votes
View score
By TYPresTRUMP, 13 months ago

up
0 votes
down
8 votes
View score
By gxnbeta, 6 months ago

How’d that work out

up
0 votes
down
0 votes
View score
By CBvalley, 9 months ago

up
2 votes
down
1 vote
View score
By Phil_Billy, 13 months ago

"We are writing bump stocks out..." It will be funny when this is banned and confiscated because it is easily converted to a machine gun simply by changing the stock. The only people more anti gun than Democrats are Republicans, they manage to pass what Democrats could not and Conservatives celebrate it. What a bizarre world.

up
5 votes
down
2 votes
View score
By Xibalba, 8 months ago

up
3 votes
down
0 votes
View score
By gxnbeta, 6 months ago

I don’t know how many people got this, but you are so right. The “divide” between red and blue is a tool used by those in power to keep us fighting ourselves. Thanks for calling this out; keep spreading the message.

up
2 votes
down
0 votes
View score
By TYPresTRUMP, 13 months ago

Thank You for listing this, What a super nice looking Thompson with Pres. Trump Engraving and entirely made in USA !!

up
0 votes
down
0 votes
View score
By SlowNSteady, 14 months ago

“Take the guns first, go through due process second...”

up
6 votes
down
2 votes
View score
By Scott_T, 17 months ago