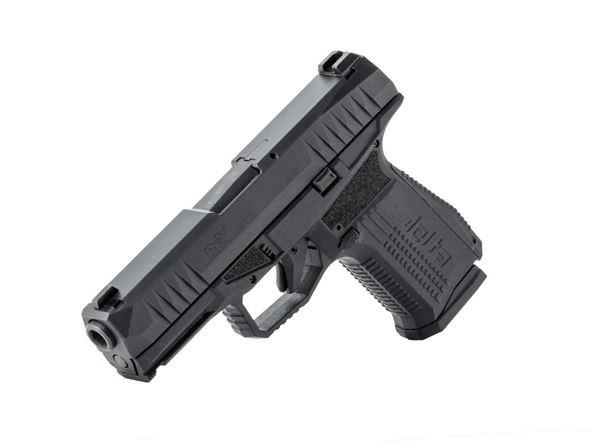 The REX Delta (REXDELTA-01) is the next evolutionary step in the REX Firearms handgun family. Building off the proven platform of the Rex Zero 1 series, the Delta is their first offering of a polymer framed striker fired pistol. The grip has a natural pointing angle that bring the sights in your line of sight every time you point the REX delta at target. Front and rear grip serrations are engineered to have proper bite in the hand, but not catch on clothing for concealed carry, resulting in a solid grip when it is fired, even in rapid succession. The REX delta is light to carry, yet comfortable to shoot even when with hot defensive loads. Low bore axis and clever weight distribution enables even a moderately trained operator to shoot fast follow-up shots with precision not common to other compact pistols.

The REX Delta employs the proprietary Striker Double Action trigger system (SDA) which brings you a double action trigger safety combined with a distinctive “wall”, mostly associated with single action triggers. During the charging of the firearm (when slide is operated manually or during firing) the striker is only partially cocked and subsequent trigger operation results in initial cocking action before the striker is released. This system provides user with enhanced safety as the firearm can be carried confidently without a manual safety and with chamber loaded since the striker is not fully cocked. An automatic triple layer passive drop safety system (3DS) helps preventing accidental discharges in mishaps when loaded pistol is dropped on a hard surface or struck.

Login or register to post comments
By k-var, 1 month ago

Handguns have to be shipped 2day air, that's not a bad rate really

up
2 votes
down
0 votes
View score
By racecar, 1 month ago