This deal is out of stock. Check other Uppers gun parts or click here to get notified when it's back in stock. 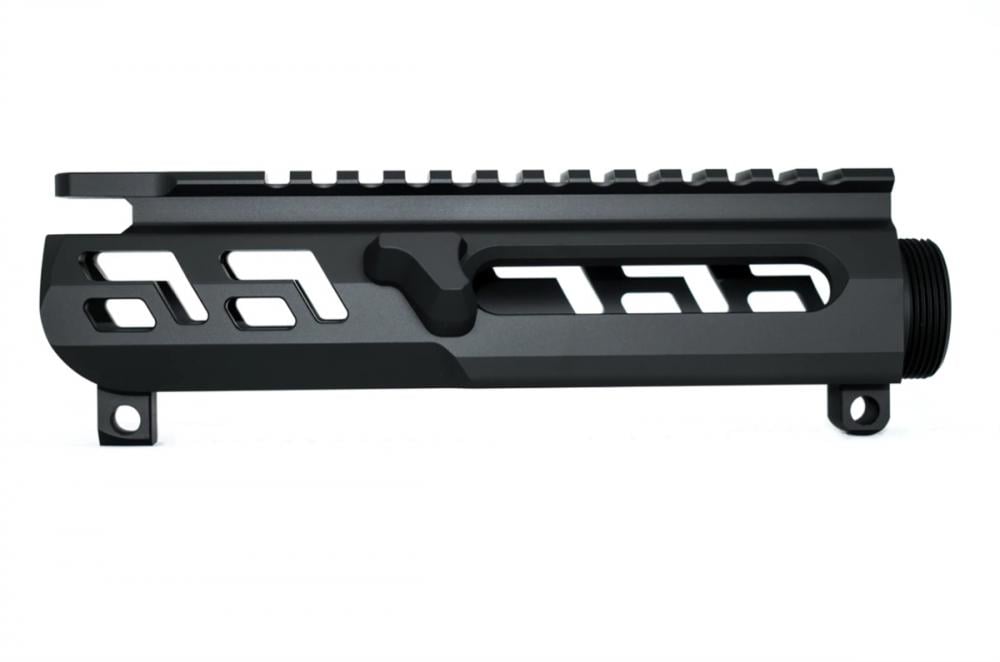 Introducing the newest component to the War Dog Industries lineup: WRC-15 Version 3 Advanced Lightweight Upper Receiver. Designed by engineers with the sporting rifle enthusiasts in mind, War Dog Industries had found balance between truly exceptional and affordability. A redesigned overall profile to give a more aggressive stance and visual appeal that WDI is known for bringing to the shooting world. Our latest design is a collaboration working hand in hand with our competition shooters. Advanced aesthetics with a redesigned receiver cutout and removable billet shell deflector.
The WRC-15 V3 has been designed in conjunction with the War Dog Industries lower receiver however it will function with any standard MilSpec lower receiver on the market. Made from lightweight aerospace grade aluminum, high pressure tested. All materials are 100% USA sourced and manufactured.

Login or register to post comments
By Buyer11, 4 months ago

To comment specifically on the hypothetical problems proposed here, gas to the face, and dirt in the action, I have lots of rounds downrange behind a skeletonized upper and can tell you neither of those are real concerns.
First, I have shot many overgassed rifles including suppressed. The problem with extra gas in the face occurs because the pressure cant escape the upper receiver and some works its way through the charging handle channel and exits past the charging handle near your face. This open design completely eliminates that possibility as the extra gas vents from sides above the magwell, nowhere near your face, and since there is no pressure retention it's not perceivable, even by someone standing next to the open sides. The force of any blast effect coming through the open sides would be much lower than what would normally come out of the open ejection port of a traditional upper because that same amount of pressure gets diluted by venting through much larger total openings.

Secondly, the concern about dirt in the openings I don't see as realistic. Most people baby their rifles as safe queens and don't drag them through the dirt, etc. I am not so gentle with mine. I have never experienced a situation through many tough training courses, or competitions, where an open design was a problem. Even in dirty and rough conditions, the problem is usually getting the dirty out of the rifle, this includes sand, water, mud. Traditional uppers dont clean themselves out very well because dirt gets trapped between closed wall and bolt carrier with nowhere to go. I'd argue that after owning and using one extensively, if you dumped a handful of yuck into a traditional closed upper and this open walled upper, that the closed upper will require field strip to get running again where the open wall's of this design will allow the yuck to exit and you may be back in service simply by charging the bolt a few times. Heck, I feel like reaching out to this vendor and offer my services to test and document both of those scenarios to eliminate these concerns completely.

up
1 vote
down
0 votes
View score
By BadBilly, 4 months ago

Thanks for the supportive comment on this upper. It’s difficult to see past our own experiences, so anything new or unfamiliar can stir some people.

No problems with a skeletonized upper. I have an 18" rifle length, adjustable gas 3-gun build, that has a skeletonized upper receiver from F1. Not same upper as this one but about the same amount of skeletonization.
Regarding the comments about a skeletonized upper receiver being potentially problematic, that has not been my experience. I like mine a lot. It reduces some weight, and I like the look of seeing the low mass TiN coated bolt carrier through the openings. There is no gas to the face at all, possible even less gas comes back through the charging handle since it can vent through sides above the magwell in a way that is entirely unnoticeable. The only down side that many might not notice, is there is a slight increase in buffer spring twang. I would have no hesitations on this purchase at all.

up
1 vote
down
0 votes
View score
By greencondor, 5 months ago

For an AR platform, this seems like a terrible idea. There's a reason dust covers exist. Also, ditto what everyone else said about gas. I guess if you're going for the lightest build possibly I could see it, but to me that's the only upside to a whole lotta downside.

up
0 votes
down
2 votes
View score
By BadBilly, 5 months ago

It’s pretty obvious that this upper isn’t made for the masses. I checked the War Dog Ind. website and they have some interesting & unique higher-end AR’s and related parts.

up
1 vote
down
0 votes
View score
By dmaic, 5 months ago

This just seems like a really bad idea...
Unless you like the taste of powder, want to look like Al Jolson when you shoot, or have a "you know what this chamber needs? MORE DIRT!" mindset - I don't get it.

I could be totally wrong, and hope I am because its a big weight saver for competition rifles - in theory. That said, I'd need to see a video review of this before even thinking about it.

not if you run piston system.

up
1 vote
down
0 votes
View score
By Krombopulos_Michael, 5 months ago

I would speculate that this would get you a ton of gas in the face, especially suppressed.