This deal is out of stock. Check TulAmmo TA919151 inventory at other vendors or click here to get notified when it's back in stock. 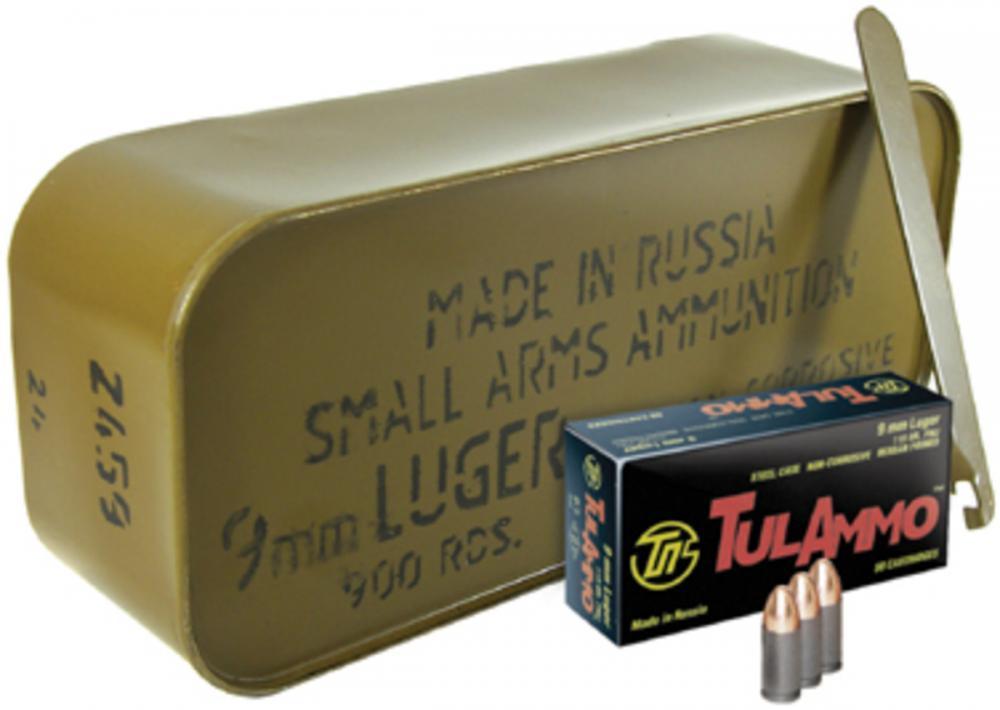 This newly manufactured 9mm ammunition is PERFECT for target practice, range training, or plinking. It is both economical and reliable and is produced by one of the most established ammunition plants in the world. Tula ammunition derives its name from its birthplace, the Tula Cartridge Works in Tula, Russia. The Tula Cartridge Works was founded in 1880 and is currently one of the largest ammunition manufacturing plants in the world. The Tula name has gained a following worldwide for its rugged, reliable, and economical product. This cartridge complies with CIP requirements and the casing features a polymer-coated steel casing with a non-corrosive Berdan Primer. The projectile features a bimetal jacket (contains steel and copper) and a lead core resulting in excellent ballistics characteristics. Muzzle Velocity: 1150 fps Max Pressure: 35,500 psi
Video Transcript:
When you see one of these oversized, green metal cans, you know it can only be one thing, ammo from Russia. But unlike most of the Russian ammo cans, this one does not contain old military surplus rifle ammo. Its newly manufactured 9mm pistol ammo from Tula. Tula is one of Russia's biggest ammunition makers. And they ship a lot of affordable steel-cased ammo to us over here in the US. These sealed metal cans are often referred to as spam cans, named after everybody's favorite non-perishable meat. Sealing up your fake pork product in a metal can makes sense, because nothing really beats it for long-term storage. It turns out the same thing is true for ammunition. You always hear that you should store your ammo in a cool, dry place. Well, you could probably stretch that rule little bit with these things. I wouldn't necessarily want to try out this theory, but I bet the ammo in these cans would hold up to a couple of decades in a leaky basement in the Florida Everglades. The outside will get corroded and rusty. But it's supposedly airtight and watertight, so it really takes a lot to damage the ammo inside. Of course, this presents a minor problem when you go to access the ammo. Unlike spam or sardines, there's no convenient pull-tab to help you get the lid off. So how do you liberate your wonderful new ammo from it's hermetically sealed prison? The obvious solution is to try to cut it open. And when that doesn't work, maybe use a hack saw or power tools. No, real power tools. Oh, that might be a bad idea. We'll have to get creative. You can try melting it. No, with acid. But that might hurt the ammo. Wait. What's this? Oh, right, a can opener. Fortunately, for you and anyone living with you, every can of Tula ammo ships with a heavy-duty can opener. It's probably not the fastest method, but it's the best way to safely open the can without damaging the ammo inside or yourself. Inside the can, all the ammo is packed nicely in the center with cardboard around the sides for cushioning. The 900 rounds of ammo are divided into 18 50-round boxes. The load in this one is a 115-grain 9mm. The steel case is not re-loadable, but uses a non-corrosive primer. It's coated with a thin layer of polymer to help increase shelf life and reliability. Bullets have a bi-metal jacket made of copper and steel. But despite rumors to the contrary, the core of the bullet is lead. Even so, some shooting ranges believe the bi-metal jackets are a little rough on backstops and steel targets. So make sure this ammo is allowed at your range. After we figured out how to get in the can, we got to shoot the ammo to see if it was worth the effort. We used six different guns to try it out, five pistols and one carbine. One of the first things we noticed was the mild recoil. Compared to a lot of other 9mm loads, this round is pretty soft shooting. So if you plan to blow through all 900 rounds in a day, your arms shouldn't get too tired. For the most part, we didn't see any issues with function or reliability of the ammo. But we did run into one failure to fire problem. In our Beretta carbine, the primer of one round went off, but failed to ignite the powder. There was just enough force to send the bolt back. And the cap of the primer flew out of the primer pocket. Since the powder did not ignite, the bullet stayed in the casing and didn't lodge in the barrel. No damage was done. And the rest of the ammo fired as expected. We took the carbine back to the 25-yard line and fired groups for accuracy from a bench rest. We ended up with one big hole just below the point of aim, which is pretty respectable for the humble Russian cartridge. Despite the one failure to fire, the Tula ammo performed well over all. The steel casings didn't pose any problems for our test guns. And the mild recoil makes it easy to shoot. More expensive ammo might provide better quality control and reloadable brass cases. But if you want to stock up in large quantities so you can take your future grandkids to the range, Tula provides an economical option with their sealed cans of 9mm.
Additional Information
Manufacturer Tula Cartridge Works
Condition New
Bullet Weight 115 Grain
Bullet Type Full Metal Jacket (FMJ)
Use Type Range Training
Ammo Casing Steel
Quantity 900
Ammo Caliber 9mm Luger (9x19)
Manufacturer SKU TA919151
Primer Type Berdan
Cost Per Round 21.0¢ per round

Login or register to post comments
By noobie107, 69 months ago

this is only worth the price if you really really want a spam can + can opener.