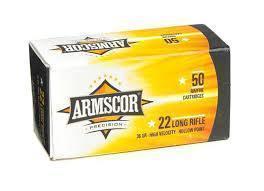 Online Only, Do Not Call, one coupon per order. Cabela's Gift Cards at 15% off. Get $5 in Gift Cards bonus via this link

ARMSCOR PRECISION ammunition line is made in the Philippines. The Company offers a wide selection of competitively priced ammunition and components with sales spread throughout the world.
ARMSCOR, an ISO 9001 Certified Company, complies with the SAAMI, CIP and other military or customer desired standards or requirements.
ARMSCOR cartridges and components are widely used by the police, military, gun hobbyist, combat shooters and other shooting enthusiast due to its high quality, precise and dependable performance.

Login or register to post comments
By drdiaboloco, 68 months ago

I was always of the opinion that for plinking-grade stuff "ammo is ammo". In April or May I picked up 500 rds of this Armscor stuff from my LGS for under $30 (5.6cts/round, note price difference as compared to this "deal"). About a month later, a thousand miles away, my friend picked up some from his LGS in Texas for about twice as much.

My friend has a dedicated .22 upper. When firing the VERY FIRST ROUND of this Armscor there was a hellacious boom and then the rifle wouldn't feed any more rounds. Turns out the shell casing had come apart and left a ring of brass stuck in the chamber. Had to take it to a gunsmith to get it back in serviceable condition.

I thought he just had bad luck or something as I'd run about 200rds of my haul through my 15-22 with no problems. Until... another hundred shots in I fired a round that had a hellacious "boom" and bits of burning powder shot through the seam between my rifle's upper and lower, stinging my face and generally suprising the hell outta me. And of course the rifle wouldn't load any more rounds, with one jammed behind the round in the chamber, and the throat of the detachable magazine looked like it'd been on the receiving end of an explosion. The shell casing in the chamber was stuck and had to be tapped out.

Two different rifles, same ammo purchased in different states at different times, same problems. Okay, so it's only two rounds out of nearly 300, but I have come to the conclusion that this ammo is garbage and not worth the (relatively) cheapo price I paid, never mind 10cents/rd. YMMV

up
1 vote
down
0 votes
View score
By Drakien, 68 months ago

I like the Armscor 22s, but this price is a bit overkill.
I've bought it locally for $3.50 a 50 pack. I would pay closer to 10 cents a round if it included shipping in that pricing. But no way would I pay a base of 10 cents a round...

up
2 votes
down
0 votes
View score
By looslee, 68 months ago

up
1 vote
down
1 vote
View score
By drdiaboloco, 68 months ago

Dunno where you're seeing prices like that. Perhaps you would be so kind as to share the identity of these "3 retailers that (you) buy from".

up
0 votes
down
0 votes
View score
By Bobslob, 68 months ago

Nobody wants your overpriced garbage 22LR. EXPIRE THIS DEAL FOLKS!!!

up
4 votes
down
1 vote
View score
By munireusa, 68 months ago

up
0 votes
down
4 votes
View score
By Knifesmith, 68 months ago

It's not that you don't have some stuff for decent deals, but to sell armscor for $0.10 ea? This was crap that you couldn't give away prior to everyone freaking out about .22lr. It wasn't selling prior to the craze for $20 a brick. $50 is GOUGING. But hey, at least it's not the $150 that CTD was selling it for at the peak right?

Just FYI, if you're willing to gouge me on one product, I won't buy from you AT ALL regardless of how good of a deal you're offering on other items. I don't support assholes that are willing to stab me in the back just because they can get away with it.

And if it's such a good deal, and you're merely passing on the price from the manufacturer, why not prove it by posting your invoice? Let your potential customers see that you're giving them a fair shake by showing your cost and markup on this item? Nobody'd begrudge you a fair markup. You are after all running a for profit business. I suspect that your markup on this item is not quite something that you're willing to admit to your potential customers.

And, how do you explain a roughly 100% increase in price in your federal .22lr over pretty much everyone else? Is it somehow costing you dramatically more from the "manufacture" than it's costing everyone else?

up
6 votes
down
1 vote
View score
By munireusa, 68 months ago

up
0 votes
down
6 votes
View score
By Knifesmith, 68 months ago

Yeah, like the CCI standard velocity 40gr. boxes of 50 that you're selling for $9.99? Please find some weasel way to explain how that's not blatant gouging... That stuff commonly sells for $4.99 a box (which is still not the greatest deal...).

up
5 votes
down
0 votes
View score
By Bobslob, 68 months ago

Garbage deal. Way overpriced. I got a bunch from gander the other day for
5cts a rd shipped. Stop the gouging!!!!!!

up
4 votes
down
0 votes
View score
By munireusa, 68 months ago

up
0 votes
down
6 votes
View score
By Seminoles1, 68 months ago

Ban the ass clown who posted this bullshit

up
2 votes
down
2 votes
View score
By cilivilil, 68 months ago