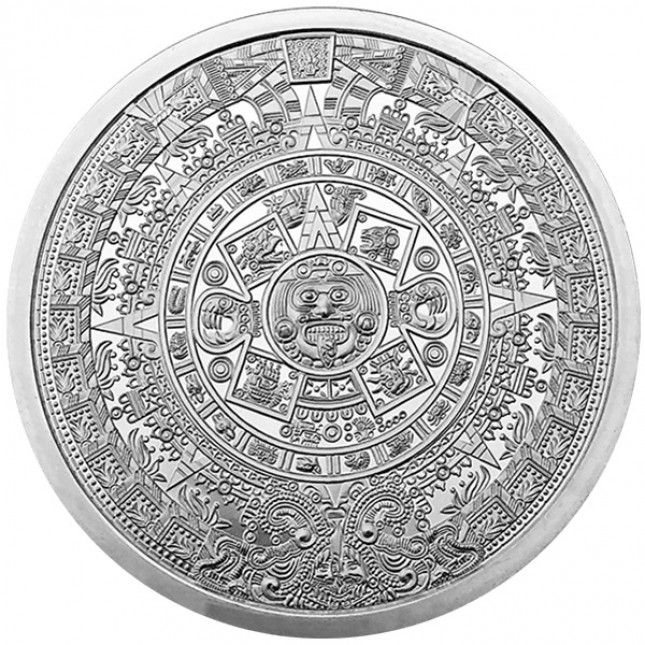 Best way to invest in gold and other precious metals, less than $50 markup per ounce of gold. You will receive the physical coin or bar.

Buy Two Ounce Aztec Calendar Silver Rounds Online
This round is minted in honor of the Aztec Calendar Stone that was carved in 1479. These Aztec Calendar silver rounds depict the solidified lava stone that weighs 25 tons and was created by the Aztec peoples from ancient times in central Mexico. It was uncovered during the 1790s during construction where it was buried under the central square in Mexico City.

These stunning rounds contain two troy ounces of silver bullion with a .999 purity. The Golden State Mint are the sole producers of these lovely rounds, which highlight the product they are most famous for, silver. This mint has been in production for around 45 years, starting in 1974.

The obverse features the namesake of this silver round: the Aztec Calendar. The stone consists of three very intricate rings that show specific details of how the Aztecs counted days, weeks, and months respectively.

The reverse features the left portrait of Cuauhtemoc, the last Emperor of the Aztecs. Cuauhtemoc was killed by the Spanish in 1525, and to this day, his face still appears all over Mexican pop culture. His portrait is surrounded by an Aztec border as well as “TWO TROY OUNCES” above & “.999 FINE SILVER” below him along with his name.

With a beautiful and intricate design such as these, these Aztec silver rounds are sure to be popular with collectors and history buffs alike! Get your own to add to this collection with SD Bullion today.